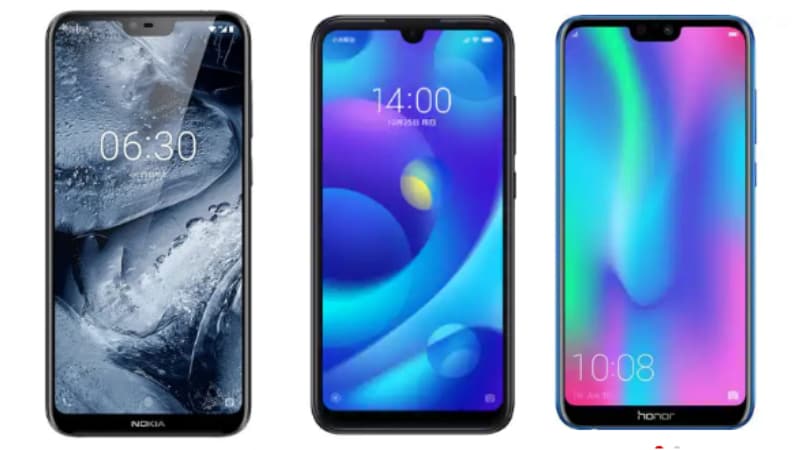 Mi Play will compete with Honor 9N and Nokia X6 aka Nokia 6.1 Plus

Mi Play was launched on Monday, after many teasers by Xiaomi over the past month. The Mi Play is seen sporting a waterdrop-shaped notch, a dual camera setup at the back, and a rear fingerprint sensor as well. It is also the first smartphone to launch with the MediaTek Helio P35 SoC. Xiaomi has also bundled 10GB of free data per month for 12 months on the purchase of the device. We compare the Mi Play with other smartphones that compete with it on the price and specifications fronts, to see how well it stands up.

On paper, the Mi Play by Xiaomi will compete with the likes of Honor 9N and Nokia X6 aka Nokia 6.1 Plus. We pit the three smartphones against each other to see which one fares better on paper.

The Xiaomi Mi Play price in China has been set at CNY 1,099 (roughly Rs. 11,100) for the lone 4GB RAM/ 64GB storage variant. The smartphone comes in Black, Dream Blue, and Twilight Gold colour options along with a gradient finish. Xiaomi's online store in China will start selling the Mi Play from 10am CST on December 25. There's no word on its availability outside of China.

Coming to specifications, all the three devices support dual-SIM slots, and run on Android Oreo. While the Xiaomi Mi Play and Honor 9N have their own skin customisations, the Nokia X6 aka Nokia 6.1 Plus runs on the stock version, and the Nokia 6.1 Plus global version is part of the Android One programme as well. Xiaomi and Honor offer 5.84-inch display size, and the Nokia variant comes with a slightly smaller 5.8-inch display. All of them offer 1080x2280 pixel resolutions, 19:9 aspect ratio, and 432ppi pixel density. The Xiaomi Mi Play is seen sporting a waterdrop-shaped notch, while the other two are seen sporting a slightly wider notch display. The Xiaomi Mi Play is the first smartphone to be powered by the MediaTek Helio P35 processor, while the Honor 9N is powered by the home grown HiSilicon Kirin 659 processor. The Nokia X6, meanwhile, is powered by the Snapdragon 636 SoC.

The Honor 9N features a 13-megapixel primary sensor and a 2-megapixel secondary sensor with f/2.2 aperture, alongside an LED flash. The camera also comes with PDAF and supports features such as HDR, time-lapse, and burst mode. On the front, there is a 16-megapixel sensor that works with a beauty mode. Both camera setups support full-HD (1080p) video recording.

The Nokia 6.1 Plus wins in the battery department by a slight margin with a 3,060mAh battery, while the other two pack a 3,000mAh battery. The Nokia X6 aka 6.1 Plus also supports Bluetooth version 5.0, while the other two support version 4.2. All the three devices support rear fingerprint sensors, and offer storage expansion via microSD card (up to 256GB) in a hybrid dual-SIM configuration. The Honor 9N is the thinnest at 7.70mm, and the heaviest at 152 grams.