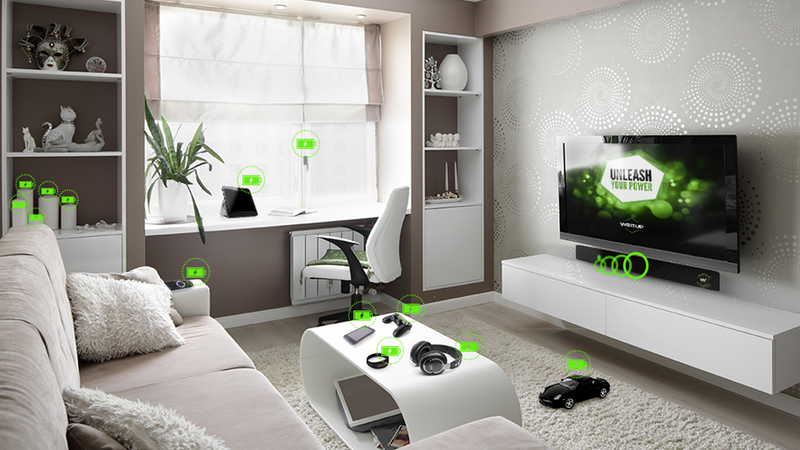 True wireless charging has remained a pipe dream for many years, ever since we first saw companies work on this magical technology. Wireless charging that’s available on products like the Samsung Galaxy S7 Edge, or the Apple Watch, isn’t true wireless charging - it requires the device to be placed on a base, which needs to be connected to a power outlet using a wire. You also need to keep the device in the correct ‘hotspot’ for charging to commence - although Qualcomm’s WiPower standard seems to have worked its way around the issue, charging electronics that are kept loosely on the charging surface.

True wireless charging is when electronics around us charge as seamlessly as they connect to a nearby Wi-Fi network. This has the potential to revolutionise the way we use electronics - even smartphones and laptops with the longest battery life typically need recharging at the end of the day. Then there are smartwatches, which have physical constraints such that you can’t fit big batteries inside them, and are thus restricted in their functionality.

Even devices that we don’t use as often stand to be benefited from true wireless charging. Things like game controllers, power banks, tablets, cameras, or wireless speakers - potentially every device that runs on batteries today. If devices are juicing themselves constantly simply by being in the right room, even if it's happening more slowly than wired charging, seeing a low battery symbol might just become a rare sight.

To understand how far we are from seeing such implementations of wireless charging in real world devices, Gadgets 360 decided to look at all the top companies in the space, and see what work they've done. In a field that's steadily moving towards standards, these are the companies that have been most lauded for their work, and their wireless charging products.

1) Energous WattUp
Founded in 2013, the Energous WattUp is based on radio frequency (RF) based charging solutions that it intends to licence to product manufacturers. The company gives the example of Wi-Fi, when it explains how WattUp can charge devices at distances of up to 15 feet from the transmitter. The company uses the 5.850-5.875GHz band to transmit power, which is outside the 5GHz band that's gaining popularity in WiFi devices.

(Also See: Buying a Wi-Fi Router? Here Are the Features and Specifications That Matter)

Energous’ portfolio consists of three different transmitters, and receivers small enough to be fitted by manufacturers into electronics as small as fitness bands. A full-sized transmitter is roughly the size of a sound bar, and can charge all electronics in a typically-sized living room. There’s a mid-size transmitter which has a shorter range of about 2-3 feet, suitable for places like a computer table, to charge peripherals like a wireless keyboard, mouse, wireless headset, and smartphone, also kept on the table. Lastly, Energous has a miniaturised transmitter that can plug into a laptop, like a USB flash drive. This can then be used to power low-power devices like fitness bands by keeping it next to it. Energous states that all these transmitters can either be standalone products, or integrated into other electronics - such as a television set or a computer monitor, or on the side of a laptop, depending upon the size of the transmitter used.

Energous also allows users to control the delivery of power through software. It's possible to determine which compatible devices are charged, and even set priorities so the right devices get charged first. You can see a visualisation of how Energous WattUp will work - and rumour has it that it's working with Apple to bring true wireless charging to future iPhones.

2) Ossia Cota
The Ossia Cota works on similar RF-based technology, and it has showcased a ‘Personal Area Chager’ or PAC, which is roughly the shape and size of Apple’s Mac Pro desktop computer. This, coupled with a receiver which could be the size of a smartphone cover, could wirelessly charge a phone within a claimed 30 feet range. Another interesting receiver application is embedding the Cota Receiver in standard-size AA batteries. This will enable wireless charging for a huge number of peripherals like television or AC remotes, without requiring the manufacturers to do anything.

The Ossia Cota is said to be using the same frequency to transmit power as Wi-Fi, in the 2.4GHz band. The company has also partnered with Japanese telecom provider KDDI (which has also invested in Ossia) to facilitate the working of IoT products, as well as KDDI-branded phones that have built-in wireless charging receivers. Have a look at their demonstration video to see how it works.

3) Wi-Charge
Wi-Charge, founded in 2010, takes a different approach to true wireless charging - by using light instead of electromagnetic waves. A transmitter installed on the roof of any room beams infrared light to a receiver, which in demo videos is placed on a phone jacket cover.

The transmitter could be integrated into something elegant like a ceiling lamp. Since it uses light, a line of sight is required for the charging to occur - meaning it won’t charge if say, the phone is in your pocket. The use of light also means that the technology will not cause any electromagnetic interference. It reportedly has a working range of between 15 to 30 feet.

Early demos have met with positive responses, and we're apparently just a couple of years away from commercial use.

4) WiTricity
This company was one of the early ones to ‘wow’ the world with a live demonstration of true wireless charging, back in a 2009 TED video. Paying homage to Nikoli Tesla’s vision of wireless electric power, WiTricity partners with OEMs to enable wireless charging in their products.

Intel was one of the early believers in WiTricity, which uses the principle of magnetic resonance instead of induction (which most current 'wireless' chargers are based on), and boasts 90 percent efficiency. Early demos were taking place in 2013, with promises of WiTricity powered cars by 2016; that might have been too good to be true, but at CES 2016, the company was able to demonstrate contact-based wireless charging for laptops.

The charging fields can transmit power even through stone and metal, and generates enough power to charge a laptop, which draws far more power than a smartphone - WiTricity demonstrated power being delivered at up to 30 watts. The charging coil itself looks extremely thin and flexible, so it could be embedded in a number of devices. Dell is going to be one of the first customers, although apparently the US military is also using the technology, to charge tech is soldiers' backpacks, such as night vision goggles.

The company also sells power mats and receiver sleeves under their own brand, which like the implementations mentioned above, are not 'true' wireless charging products. They are capable of charging through surfaces like wood, so you can place them under a desk and the phone kept above can still charge.

These are some of the biggest attempts being made to make true wireless charging a reality in the next few years. What do you think? Are you also waiting as eagerly as we are for this?