iPhone Accounts for 18.2 Percent of Smartphone Sales but 92 Percent of Industry Profits: Study 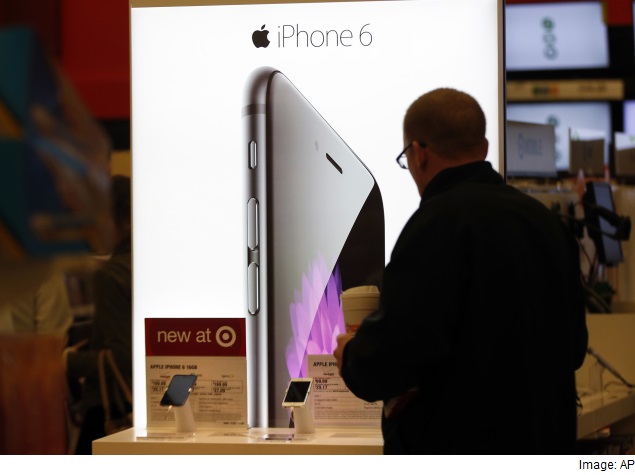 Smartphone sales may be slowing for some tech companies, but not for Apple.

Analysts expect another powerhouse performance from the California tech giant when it reports quarterly financial results Tuesday. Apple's signature iPhones remain popular, even as other smartphone makers are seeing demand slow down.

Wall Street analysts estimate Apple will report a hefty $10.3 billion (roughly Rs. 65,565 crores) in profit after selling $49 billion (roughly Rs. 3,11,911 crores) worth of iPhones, iPads, Mac computers and other products during the April-June quarter. That's an increase of more than 30 percent in both revenue and profit from the same period a year earlier.

Apple has said it won't release sales figures for the new Apple Watch, though some analysts believe demand has fallen since Apple introduced the wearable gadget three months ago. But it almost doesn't matter: As in other recent quarters, Apple will reap its biggest rewards from its smartphones, especially the new, big-screen iPhone 6 (Review | Pictures) and iPhone 6 Plus (Review | Pictures) models introduced last fall. Here's why:

Bigger screens are popular
People use smartphones for social networking, playing games, looking at pictures - far more than they use them to make calls. And for those activities, many users prefer a bigger screen.

Several analysts say their studies confirm Apple CEO Tim Cook's claim that many recent iPhone buyers are people who switched from Android phones. Some consumers were drawn to Android devices in recent years because they had bigger screens, but Apple's decision to increase the iPhone's screen size is persuading Android owners to defect, said Ryan Reith, who tracks smartphone sales for the research firm IDC.

Apple likely sold about 47 million iPhones during the most recent quarter, or 34 percent more than a year earlier, according to analysts polled by FactSet.

iphone are hugely profitable
At an average selling price of more than $600, before carrier subsidies, Apple's phones are more expensive than many competing Android models, but they also provide more profit.

While Apple doesn't break out the numbers, Canaccord Genuity analyst Michael Walkley estimates that during the first three months of 2015, Apple reaped 92 percent of the $16.6 billion (roughly Rs. 1,05,668 crores) in operating profit generated from smartphones by companies around the world.

Samsung sold more phones than Apple during that period, but many of them were lower-priced models, giving Samsung only about 15 percent of the industry's operating profits, according to Walkley. He estimates other companies operated their smartphone business at a loss or broke even.

Apple's rivals face challenges
Apple sold about 18.2 percent of all the smartphones worldwide in the first quarter of 2015, while Samsung had 24.5 percent of the market, according to IDC. But Samsung has said it expects a drop in profit for the April-June quarter, apparently because sales of its new Galaxy S6 models fell short of expectations.

HTC has also lowered its revenue forecast for the quarter, as it blamed weak sales in China and lower demand for high-end Android phones. Microsoft, meanwhile, is cutting 7,600 jobs and writing down the value of its Nokia phone division by $7.6 billion (roughly Rs.48,317 crores), essentially acknowledging that its effort to build a business selling Windows smartphones had failed. Microsoft also reports earnings Tuesday.

Although each company has its own issues, experts say smartphone sales are slowing in many developed countries because most people already own one. IDC is forecasting an 11 percent increase in global smartphone sales this year, but that's down from 28 percent in 2014.

Phone makers using Google's Android operating system will see even slower growth of about 8.5 percent. But IDC predicts iPhone sales will grow by 23 percent this year.

Demand for Apple Watch isn't clear
Most experts say iPhone sales will get another bump when Apple releases new models this fall. Analysts say a majority of iPhone owners are still using older models, such as the iPhone 4 or iPhone 5. As a result, they say, those users are likely to buy new iPhones when their two-year wireless contracts expire.

The picture isn't quite as rosy for some other Apple products. Sales of the once-vaunted iPad tablet computer have been declining for several quarters. And while the company says demand for the Apple Watch is strong, analysts have produced estimates that range from bullish to lackluster.

Though Apple has often trumpeted sales results for new products, Cook has said he doesn't want to reveal Apple Watch figures for competitive reasons. Instead, Apple will lump revenue from the watch into its "Other Products" category, which includes the iPod media player, Apple TV streaming device and Beats headphones.