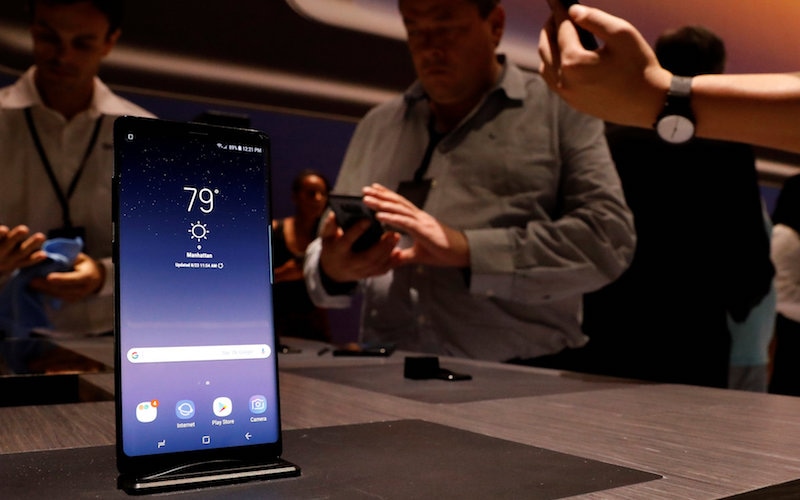 As we gear up for another smartphone battle between Samsung and Apple this fall, there is a new wrinkle for the average smartphone customer to consider: prices that edge toward $1,000 (roughly Rs. 64,000) for a new phone.

The Galaxy Note 8, Samsung's latest premium smartphone, starts at $940 (roughly Rs. 60,000). For months, analysts have speculated that the 10th anniversary edition of the iPhone, which will debut at Apple's rumored September 12 event, could be even higher. Even for smartphone customers used to paying $800 or $900 for a phone, the $1,000 mark may seem a bridge too far. For that, after all, you could easily get a pretty good laptop - a MacBook or Surface Laptop, for instance.

What's behind the price increases? Some of it is pure function, as these phones do more than even the standard iPhone or Galaxy models. In general, smartphones carry more technology than ever before. While they aren't yet laptop replacements, smartphones are required to do more than ever before as people rely on them for way more than Web browsing or phone calls. (Remember those?) Making something versatile, portable and with enough battery life to endure being used every moment of the day isn't cheap.

The smartphone-buying public is also craving innovation from this latest batch of phones. And innovation is expensive. The Galaxy Note 8's 6.3-inch edge-to-edge screen is its main feature, and a costly one. The same is true of Apple's expected super-sharp OLED screen in the iPhone; the phone could also have new facial recognition technology and wireless charging, which all contributes to its bigger price jump.

Another part of it, of course, is profit. Apple and Samsung are companies, after all, and ones that are very good at making money - in fact, they're basically the only ones in the smartphone business who make any on their phones.

It's hard to say whether anything will really justify a smartphone price that large in the average consumer's minds. But the point for Samsung and Apple is that they may not have to.

Apple Unlikely to See Many Takers for $1,000 iPhone 8, Says Barclays

For one, both are looking at markets where people have been waiting to upgrade for a while. Given the Galaxy Note 7 debacle and Apple's decision not to substantially upgrade the iPhone 7, there are plenty of people with extra cash champing at the bit to get their hands on something brand-new and spectacular.

Secondly, in the case of both the Galaxy Note 8 and the rumored upcoming $1,000 iPhone, these are top-of-the-line phones for the companies, both a cut above the "everyone" phones: think Lexus, not Toyota.

Still, knowing why a smartphone edges up the price scale doesn't exactly help one with realities of paying for one.

The good news - or at least, the less-bad news - is that very few people are going to pay so much for a phone all at once, analysts said. For the Galaxy Note 8, there are already many discounts in place to soften the blow or sweeten the deal.

A $1,000 price point is "unlikely" to hurt most users in the US, said Ramon Llamas, analyst at International Data. "Aggressive prices by leading carriers" make even $1,000 phones easier to swallow, he said - the highest-end iPhone 7 Plus is already $969, but can be purchased for $46 a month.

For most people, it will be most palatable to buy a phone on one of these subsidised plans - the old-fashioned kind where you pay your wireless carrier a portion of the phone's price up front, and then a little bit every month.

The people who will really get hit are those who want to buy the phone outright, whether as a cost-saving measure or to make it easier to jump carriers. In the US, that's about 12.5 percent of Americans,according to a June survey from analysis firm NPD. Overseas, where Apple and Samsung are both trying to grow, it's far more common.

Consumers shouldn't expect prices to drop in any big way in the smartphone generations to come, Llamas said. Neither Apple nor Samsung has a history of lowering prices on their new phones, though they will move older ones down the price scale.

In the end, what consumers will see happen is that both Samsung and Apple are trying to carve out a new tier of the market above where we've traditionally thought of them, where they still stand a chance of making money and won't tarnish their brands with cheaper phones.