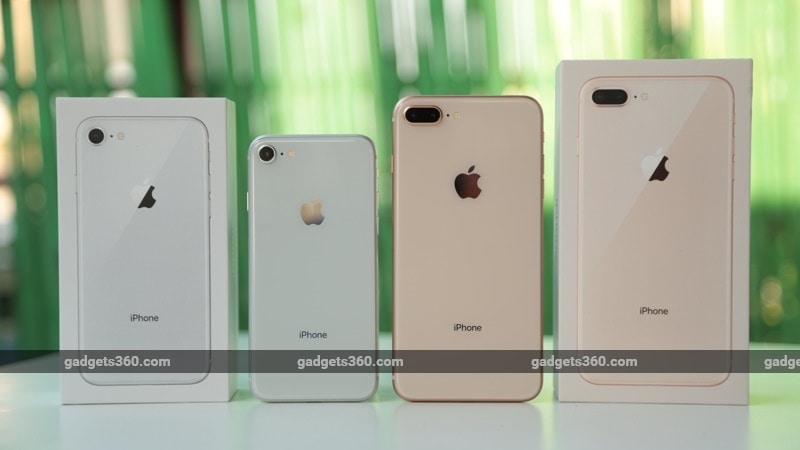 Apple announced its new iPhone models roughly two weeks ago, and after going up for pre-order in India last week, the iPhone 8 and iPhone 8 Plus (Review) officially launched in the country at an event on Friday with Reliance Jio, and you can now go buy one, both online and offline. Apple CEO Tim Cook also spoke at the event, via a video link. The launch of the iPhone X is still due for November in India, so for about a month at least, if not more, these two phones are the best iPhones you can possibly buy.

The iPhone 8 price in India is Rs. 64,000 for the 64GB variant and Rs. 77,000 for the model with 256GB storage. iPhone 8 Plus 64GB and 256GB storage options are priced at Rs. 73,000 and Rs. 86,000 respectively. The iPhone 8 and the iPhone 8 Plus offer incremental improvements over the last year's models, but bring in some interesting new features such as wireless charging, and a major performance boost thanks to the new A11 Bionic SoC, as well as cameras that are now at par with the best in business.

There are some offers you can grab on the iPhone 8 and iPhone 8 Plus as well. If you choose to buy from Amazon, there's an exchange offer of up to Rs. 12,100 off, plus an additional Rs. 3,000 if you're exchanging an old iPhone. Flipkart also has exchange offers, a buyback guarantee, and a bank cashback offer. You can also avail Jio's 70 percent buyback offer via Amazon, under which, Jio-iPhone plan users that return the phone after 12 months will get a buyback of Rs. 44,800. To use the offer, you need to either recharge Rs. 799 per month for a year, or get a one-time Rs. 9,588 (or higher) recharge from Jio. Snapdeal, too, has some interesting offers in partnership with some banks, including Rs. 13,000 instant discount on the iPhone 8.

At the other end of the spectrum, there's the Jio Phone (review) from Reliance Jio. "Bharat ka smartphone" promises to be effectively free, since you can return it in three years for a full refund, but obviously, nothing is ever that simple. Deliveries of the phone have started, and as is usually the case, there's a bit of fine print involved.

For one thing, Jio Phone users have to pay a minimum of Rs. 1,500 per year for the first three years of using the phone if they want to keep using it. So that "free" feature phone will set you back by Rs. 1,500 (refundable) and usage charges of at least Rs. 4,500 (non-refundable). If you return the phone within one year, you will be charged Rs. 1,500 plus taxes. Before two years, the charge is Rs. 1,000, plus taxes. Before three years, the charge is Rs. 500. The refund amount of Rs. 1,500 is still paid to you, adjusted against these charges. After three years, there is only a three-month window to return the Jio Phone.

As you might expect, the phone is also SIM-locked - you can't put a SIM card from a rival network into the Jio Phone. You are also not allowed to sell, lease, transfer, or assign the phone to someone else. As we noted in our review, the phone has the potential to succeed and delivers a good enough experience for the price. The Jio apps give you access to movies, TV, and music at no additional charge, and OTA updates could add new features over time. It's not a replacement to a smartphone, but the Jio Phone is definitely an interesting prospect.

Between these two phones at the extreme ends of the pricing spectrum, the Nokia 8 has been launched in India by HMD Global at an event in New Delhi. The price had already been revealed by an Amazon listing, and the phone will be available from October 14, online only via Amazon India and otherwise available on select offline stores. The Nokia 8 price in India is Rs. 36,999, which pits it against the OnePlus 5 smartphone.

The Nokia 8 has a 5.3-inch QHD display, a Qualcomm Snapdragon 835 SoC, and 4GB RAM. It comes with 64GB of storage, microSD support, and a 3090mAh battery. It has a dual-rear camera setup with two 13-megapixel sensors, and there's another 13-megapixel camera on the front as well.

Meanwhile, the Nokia 3310 is back in the news as a new 3G version of the phone has been launched in Australia. The handset re-launched this year with 2G access, but now the new version can browse the Internet at relatively higher speeds. And although it's only in Australia for now, it's likely to launch in more markets soon.

There were a number of other launches that took place this week as well, including a phone that claims to drive away mosquitoes. The LG K7i, priced at Rs. 7,990, uses ultrasound to drive away mosquitoes, though there's some disagreement on the effectiveness of the technology. Other launches included the Xopo Flash X1 and Flash X2, which come with an 18:9 display ratio. There was also the Panasonic P99 with 4G VoLTE, priced at Rs. 7,490. The phone has a 5-inch HD display, a 1.25GHz quad-core processor, and 2GB of RAM. It comes with 16GB storage and a 2000mAh battery. The company also launched the Panasonic Eluga I4, which has a 3000mAh battery, and a virtual assistant called Arbo, priced at Rs. 8290.

Lava launched a new budget smartphone, the Lava Z60, which is priced at Rs. 6,499. The phone has a 'bokeh' mode for photos, though this is achieved through software, not hardware. The phone has a 5-inch display, and a 1.1GHz quad-core processor, along with 1GB RAM, and 16GB storage. Meanwhile, we also got the Ziox Astra Curve, priced at Rs. 7,299. The 4G VoLTE capable phone has a 5-inch display, a 1.3GHz quad-core processor, 2GB RAM, and 16GB storage.

Meanwhile, there were also a couple of interesting offers from telcos. Airtel has announced a 112GB data plan, under which users pay Rs. 999 for 28-days validity, and apart from the 112GB data, you also get "unlimited" calls - capped to 250 minutes per day, and 1000 minutes per week. There's also an offer for new postpaid users - the operator will give 10GB free data per month for three months - but only for people who sign up for specific plans. Vodafone meanwhile announced a partnership with Intex, and people who are using Intex feature phones will get a 50 percent cashback on recharges.

Meanwhile, we now know a little bit more about Google's upcoming flagships, the Pixel 2 and Pixel 2 XL. The two phones will be launching on October 4, but ahead of that, we've learned that the phones will have an always listening music feature, portrait mode photos similar to the new iPhones, and dual speakers.

The specifications of the phones have also been leaked ahead of the launch. The Pixel 2 will reportedly have a full-HD display, while the Pixel 2 XL will use a QHD display, and the phones are expected to have 2700mAh and 3250mAh batteries, respectively. Both are expected to have a Snapdragon 835 powering the phone, and a dedicated Google Imaging Chip for better photos. The upcoming Google phones will also feature an 'Active Edge' sense feature, so you can squeeze the phone as an input.

Finally, we also got a look at the upcoming foldable smartphone from ZTE, the Axon M. All the big companies inching closer to launching foldable smartphones, but the Axon M, which is expected to launch on October 17, could be the first to get there. The phone has a hinge setup on the side that attaches the secondary display. Both screens operate at full-HD and apparently can unfold to become a 6.8-inch screen at a 1920x2160 pixel resolution. Not much else is known, but expect top-tier pricing, and specifications.

iPhone 8, iPhone 8 Plus in India, Another Amazon Sale, Android O for Nokia 8, and More: Your 360 Daily
Battle Chasers: Nightwar Review