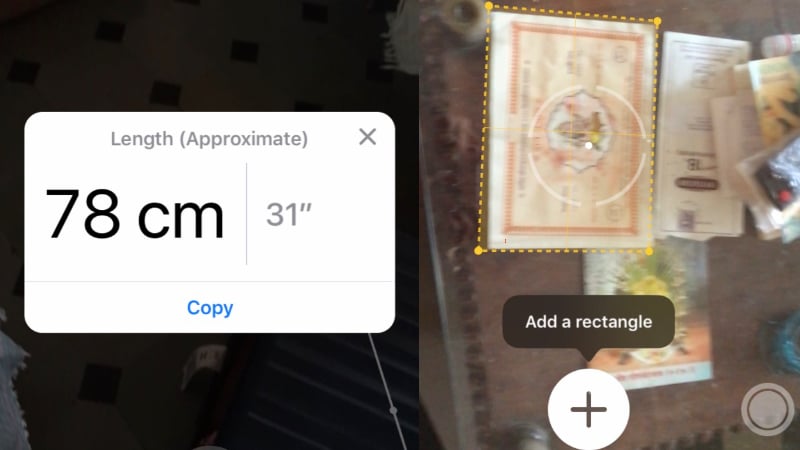 The Measure app allows you to measure the distance between two points and the dimensions of certain objects. We've seen similar apps on the App Store for a while, but the iOS 12 Measure app has been designed by Apple and ships with the latest version of iOS. This makes it far more likely to be used by people for measurements. We used the Measure app with a whole bunch of objects in our house with generally positive results. Before you use the Measure app, please do keep in mind that it's likely to work better with iPhone 8 and newer iPhones, where cameras are better optimised for AR. We tested the app with iPhone 7 and the results were pretty good, but not 100 percent accurate. We aren't ready to throw out our measuring tape just yet, but iOS 12's Measure app is a reliable backup for measurements in case the tape isn't around.

How to measure things using the iOS 12 Measure app

Follow these steps to measure something with iOS 12's Measure app:

We noticed that the distance measured by the Measure app is off by a few centimetres at most. We measured a mattress whose length was 1.7 metres (the app said 1.72m), a box with a diameter of 14cm (the app said 14cm), a book that was 14cm long and 25 cm wide (the app got this right), and a table that was 60cm wide (the app said 61cm). On our iPhone 7, the results were fairly reliable overall, when compared against a physical measuring tape.

iOS 12 Release Date, Time, and How to Install on iPhone, iPad, or iPod Touch

How to check levels using the iOS 12 Measure app

The Measure app also allows you to check if an object is vertically or horizontally level. This was in the Compass app earlier but now it's a part of the Measure app.

How to Enable or Disable Automatic Software Updates on iOS 12

The Level feature was a part of the Compass app in iOS 11, but with iOS 12 it has been moved to the Measure app

iOS 12 Screen Time: How to Reduce Your iPhone Addiction

For more tutorials, visit the How To section.