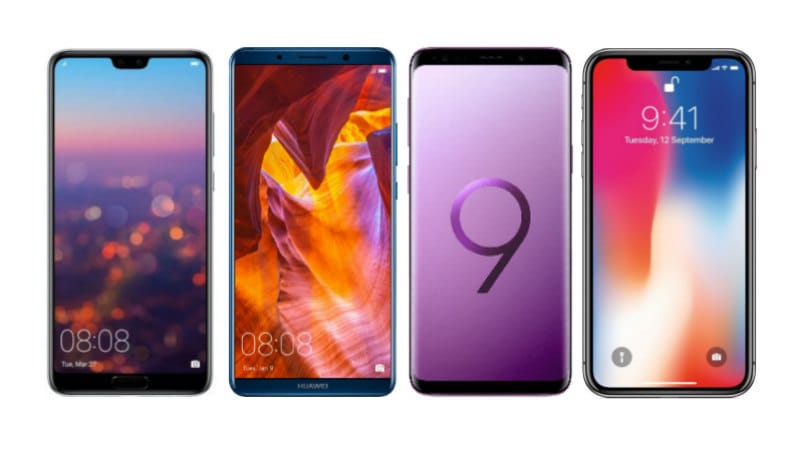 Huawei P20 was launched earlier this week as a new premium offering by the Chinese company. The smartphone comes with AI-powered camera features and sports optics "co-engineered" with Leica. It also comes with "nature-inspired" pearlescent colour effects that are visible in two of the colour variants - Pink Gold and Twilight. Graphite Black and Midnight Blue are more standard colour variants without gradients. But the key specifications of the Huawei P20 make it a closer competitor against the Huawei Mate 10 Pro that the company launched in October. The hardware is also quite comparable with the Samsung Galaxy S9. Likewise, it sports a notch design, curved metal frame, and a vertical dual rear camera setup that all reminds us the iPhone X. Therefore, we are here taking a look at the Huawei P20 price, specifications, and key features and compare them with those of the Mate 10, Galaxy S9, and iPhone X.

Huawei P20 price in Europe has been set at EUR 649 (approximately Rs. 52,200). It is said to be immediately available globally, and its India launch is expected to happen soon.

Unlike the Huawei P20, the Huawei Mate 10 Pro was launched at EUR 799 (approximately Rs. 64,100). It went on sale in November in markets, including Australia, China, Egypt, Malaysia, Mexico, New Zealand, Philippines, Saudi Arabia, Singapore, Spain, and the UAE, in addition to some parts of Europe and Africa. But it hasn't debuted in India so far.

The iPhone X, on the other side, is available in India in 64GB and 256GB variants at Rs. 89,000 and Rs. 1,02,000, respectively. Both come in Silver and Space Grey colour options and are available for purchase through major e-commerce sites and offline retailers across the country.

The dual-SIM Huawei P20 runs Android 8.1 Oreo-based EMUI 8.1 and features a 5.8-inch full-HD+ (1080x2244 pixels) RGBW FullView display with 770 nits of brightness. The display is notably claimed to be 23 percent brighter than the iPhone X. Further, the smartphone is powered by an octa-core Huawei HiSilicon Kirin 970 SoC, coupled with a dedicated NPU (neural processing unit) and 4GB of RAM. On the imaging front, the dual rear camera setup of the Huawei P20 comprises a 12-megapixel RGB sensor along with an f/1.8 aperture and a 20-megapixel monochrome sensor sporting an f/1.6 aperture. The front of the smartphone features a 24.8-megapixel camera that supports a 3D portrait lighting effect.

Huawei has provided 128GB of onboard storage. In terms of connectivity, the Huawei P20 has Wi-Fi, Bluetooth, GPS/ A-GPS, NFC, and a USB Type-C port. The handset packs a 3400mAh battery and has 7.65mm of thickness. The battery pack supports Huawei SuperCharge fast charging technology that is rated to deliver 58 percent of power in just 30 minutes. Besides, the build of the Huawei P20 comes with IP58 certification for dust and water resistance, and there is a home button with an embedded fingerprint sensor and gesture support.

The Huawei Mate 10 Pro, on the other hand, runs Android 8.0-based EMUI 8.0 and has a 6-inch full-HD+ (1080x2160 pixels) OLED display with 81.61 percent of screen-to-body ratio, higher than the 81.36 percent of the screen-to-body ratio of the iPhone X. Under the hood, the handset has the same Kirin 970 SoC that is powering the Huawei P20, paired with 4GB RAM/ 64GB onboard storage and 6GB RAM/ 128GB storage. The smartphone has a dual rear camera setup with a 20-megapixel monochrome sensor and a 12-megapixel RGB sensor, coupled with OIS, BSI, PDAF, CAF, Laser Autofocus, and Depth Autofocus, alongside a dual-LED flash module. On the front, there is an 8-megapixel fixed focus image sensor.

Unlike the Huawei P20 and Mate 10 Pro, the Samsung Galaxy S9 (Review) runs Samsung Experience based on Android 8.0 Oreo and features a 5.8-inch QHD+ (1440x2960 pixels) Curved Super AMOLED display with 18.5:9 aspect ratio. The smartphone is powered by an octa-core Snapdragon 845 SoC (in the US) or Exynos 9810 (in global markets, including India), coupled with 4GB of RAM, and up to 256GB of onboard storage. All the storage variants of the Galaxy S9 are notably expandable via microSD card (up to 400GB). On the back of the smartphone, there is a 12-megapixel SuperSpeed Dual Pixel camera with autofocus, OIS, and a variable aperture of f/1.5 - f/2.4. The front panel has an 8-megapixel sensor with autofocus and f/1.7 aperture.

Lastly, it is the iPhone X (Review) that presently runs iOS 11.2.6 and has a 5.8-inch (1125x2436 pixels) Super Retina display. The latest iPhone is powered a hexa-core Apple A11 Bionic SoC, combined with 3GB of RAM and 64GB/ 256GB onboard storage options. On the back, there is a dual camera setup with two 12-megapixel sensors - with one featuring f/1.8 aperture and the other one has an f/2.4 aperture. There is also a quad-LED True Tone flash. For selfies and FaceTime support, there is a 7-megapixel image sensor on the front with Portrait mode. The iPhone X also has a TrueDepth system that includes an Infrared (IR) sensor-equipped dot projector to enable facial recognising Face ID feature.

God of War, Yakuza 6, The Fractured But Whole, and Other Games Releasing This April
The Handmaid's Tale Is More Disturbing in New Season 2 Trailer