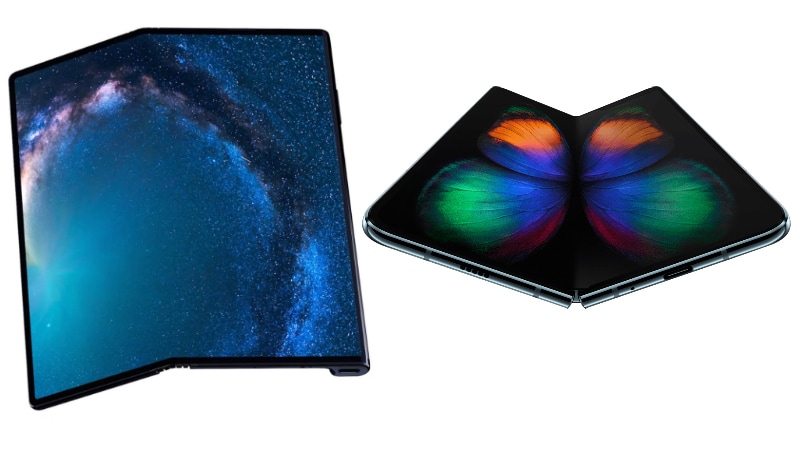 Huawei took the centre stage at MWC 2019 to unveil its first foldable phone. The Huawei Mate X comes with premium specifications, while also folding out to become a tablet, providing additional screen real estate. The phone, unarguably, pits directly against the Samsung Galaxy Fold, which was launched last week, and its design is very different than the Mate X, although it also unfolds to reveal a larger screen. These two are the first foldable smartphones that will be reaching the market this year.

Huawei has been going against Samsung quite often recently, with the launch of the Huawei Nova 4 with its display hole for selfie camera design, soon after Samsung launched the Galaxy A8s with the same design in December last month.

We pit the Huawei Mate X with the Samsung Galaxy Fold to ascertain which one fares better, at least on paper.

The Huawei Mate X price globally has been set at EUR 2,299 (roughly Rs. 2,09,400) for the 8GB RAM/ 512GB storage variant. The smartphone will go on sale from the middle of 2019, and will come in a single Interstellar Blue colour option initially.

Samsung Galaxy Fold price has been set at $1,980 (roughly Rs. 1,41,300) and the phone will be offered in four colours - Green, Blue, Silver, and Black. The company notes the smartphone will be sold in both 4G LTE and 5G variants. According to Samsung, it will start selling the Galaxy Fold beginning April 26, 2019 in select countries around the world. There is no word on the pre-order details right now or exactly which markets will be receiving the device. If we were to hazard a guess, all major markets would be getting the Galaxy Fold, sooner or later.

The two phones are very different when it comes to design. The Huawei Mate X features two FullView Display panels in 6.6-inch and 6.38-inch sizes that jointly bring an 8-inch OLED FullView Display panel when unfolded -- without any display notch. Huawei claims that the Mate X has a patented hinge design with over 100 components. For photos and videos, the Huawei Mate X sports a two-in-one front and rear triple camera setup that is powered by Leica optics.

Unlike the Huawei Mate X which has two screens at the front and back and folds out into a large screen, the Samsung Galaxy Fold comes with only one screen in the front. It opens and shuts like a book to reveal two screens inside. The phone comes with a wide notch holding two selfie sensors on the inside and a triple rear camera setup that sits at the back. There's another camera on the front - giving it a total of six cameras.

Huawei Mate X vs Samsung Galaxy Fold specifications
The dual-SIM (Nano) Huawei Mate X runs Android 9 Pie on top of EMUI 9.1.1, while the Samsung Galaxy Fold also runs on Android 9 Pie-but based on its One UI skin. The Huawei Mate X features two FullView Display panels in 6.6-inch and 6.38-inch sizes that jointly bring an 8-inch OLED FullView Display panel when unfolded -- without any display notch. The device, when folded, offers a 6.6-inch display experience at the front with a pixel count of 1148x2480 pixels and 19.5:9 aspect ratio. At the back, the Huawei Mate X has a 6.38-inch display with 892x2480 pixel count and 25:9 aspect ratio.

The back display can also be used to capture selfies. When unfolded, the 8-inch display has a 2480x2200 pixels resolution along with an 8:7.1 aspect ratio. Huawei also took a dig at Samsung by showcasing at its conference that the Mate X offers an 8-inch display experience without a cutout where the Galaxy Fold provides a 7.2-inch display when unfolded with a cutout for the selfie camera.

The Huawei Mate X has a HiSilicon Kirin 980 SoC, coupled with 8GB RAM. There is also the Huawei Balong 5000 5G chipset that comes as the world's first 7nm modem, capable of delivering up to 4.6/ 2.5Gbps downlink/ uplink speeds on Sub-6GHz. On mmWave, the chipset can deliver up to 6.5/ 3.5Gbps downlink/ uplink speeds. There is also a quad 5G antenna on the handset. The Huawei Mate X has 512GB of onboard storage that is expandable via microSD card (up to 256GB).

Samsung hasn't revealed the processor on the Galaxy Fold, but it says that it is based on 7nm manufacturing process, tipping it is the Snapdragon 855 SoC. The smartphone also includes 12GB of RAM and 512GB of inbuilt storage (UFS 3.0) - there is no storage expandability. Samsung hasn't listed its 5G components as of yet.

Coming to the camera, as mentioned, the Huawei Mate X sports a two-in-one front and rear camera setup that is powered by Leica optics. The camera setup includes three sensors, including a 40-megapixel sensor (wide-angle lens), 16-megapixel (ultra-wide-angle lens), and an 8-megapixel sensor (telephoto). The phone also has a mirror shooting mode that lets users show the preview of what they're capturing to others, thanks to the rear display panel.

The Huawei phone packs two battery packs that jointly offer 4,500mAh of capacity. It has 55W Huawei SuperCharge technology that is rated to deliver 85 percent of power in 30 minutes of charge. Samsung has also packed two batteries in the phone that are placed on two sides of the phone. The batteries combine their energy and offer a total capacity of 4,380mAh. Samsung offers fast charging support and wireless charging support as well.