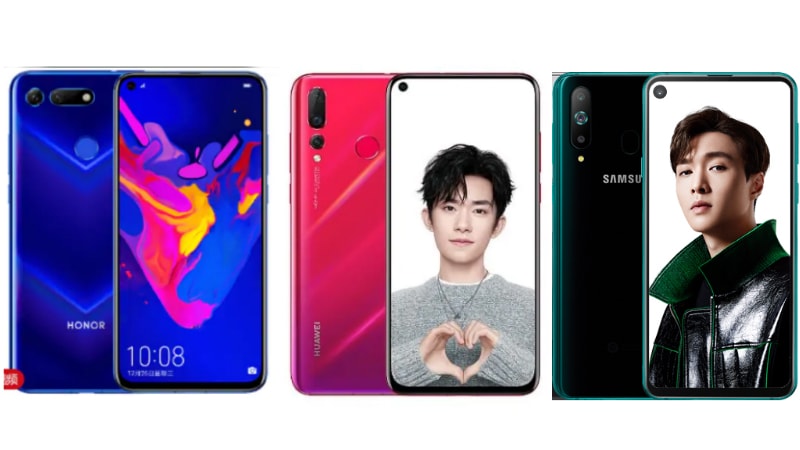 Huawei's sub-brand Honor has now launched the Honor V20 in China, after rolling out several teasers and building enough hype. The smartphone adopts the new display hole for selfie camera design trend, and sports a dual rear camera setup at the back. The rear setup packs a 48-megpaixel sensor, while the selfie snapper is at 25-megapixels. Other big highlight of the smartphone is that it is powered by the top-end HiSilicon Kirin 980 SoC based on the 7nm process. The Honor V20, looks great on paper, but it is set to compete with others in the market that have brought in the same selfie camera design.

Even though Honor unveiled the V20 first, Samsung was the first to launch this new design in the Chinese market with the Samsung Galaxy A8s, after which Huawei also launched the Nova 4 with a similar punch-hole selfie camera design. We pit these two smartphones with the Honor V20 to see how the new entrant fares on paper. Notably, the Honor V20 will be launched as the Honor View 20 globally, with a launch event scheduled for January 22.

The Samsung Galaxy A8s is also priced in China at CNY 2,999 (roughly Rs. 30,500) for the 6GB RAM/ 128GB storage variant, while the price of its 8GB RAM +128GB storage model is yet to be made available. Samsung's online store in China and JD.com have listed the handset for pre-orders. Moreover, the shipping and offline market availability of the smartphone is scheduled for December 31.

Lastly, the Huawei Nova 4 price has been set at CNY 3,399 (roughly Rs. 35,300) for the 48-megapixel rear camera variant, and CNY 3,099 (roughly Rs. 32,200) for the 20-megapixel variant. They are up for for pre-orders via Huawei's Vmall e-commerce site, and will go on sale on December 27. Huawei will make the smartphone available in Black, Blue, Red, and White colour variants.

All the three phones were launched this month itself, and they all support dual-SIM slots and run on Android Pie with skin customisations on top. As for display, both the Huawei Nova 4 and Honor V20 sport a 6.4-inch display size, while the Samsung Galaxy A8s sports a slightly smaller 6.2-inch display. All the three phones sport 1080p resolution with 19.5:9 aspect ratio.

Coming to optics, the Honor V20 sports a 48-megapixel Sony IMX586 sensor with f/1.8 aperture, 960fps slow-motion video recording support, autofocus, AI HDR, and LED flash support. There's a secondary 3D Time of Flight (ToF) sensor to capture the depth of an image, and can be used for such features as slimming subjects in photos as well as creating 3D avatars of users. At the front, there is a 25-megapixel front sensor with f/2.0 aperture and fixed focus support. Camera features include AI photo, night scene, portrait, fun AR, time-lapse photography, slow-motion, and more.

The Honor V20 packs the largest 4,000mAh battery, with the Huawei Nova 4 coming in second with 3,750mAh battery, and the Samsung Galaxy A8s sporting a 3,400mAh battery. Samsung is the only one that offers microSD card slot for memory expansion (up to 512GB). All the three phones support rear fingerprint sensors.