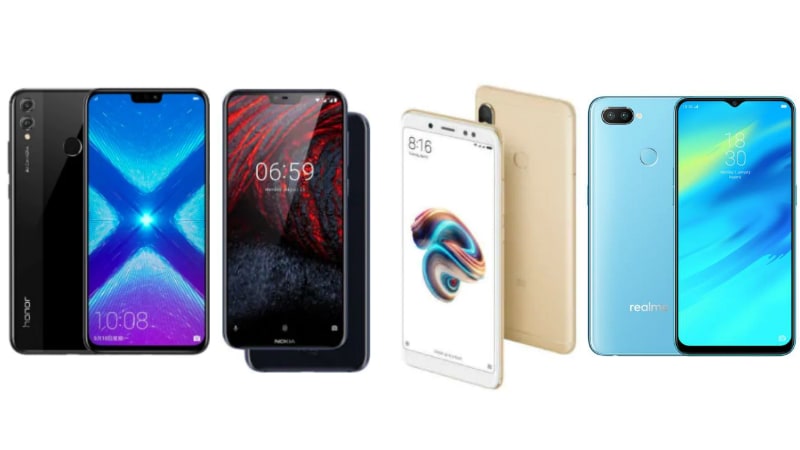 Honor 8X will compete with the likes of Redmi Note 5 Pro, Realme 2 Pro, and Nokia 6.1 Plus

After announcing it in China last month, Huawei sub-brand Honor has now launched the Honor 8X smartphone in the Indian market. The smartphone sports a premium look, glass-finish back, dual camera setup, a display notch, and supports the company's GPU Turbo Technology. At its [price point]https://gadgets360.com/mobiles/news/honor-8x-price-14999-india-launch-specifications-features-1932819), the Honor 8X is set to compete with a host of smartphones in the Indian smartphone segment. Honor will face stiff competition from companies like Xiaomi, Realme](https://gadgets360.com/mobiles/realme-phones), and Nokia in the fiercely contested mid-range segment.

Honor 8X vs Redmi Note 5 Pro vs Realme 2 Pro vs Nokia 6.1 Plus price in India

Starting with the newly launched Honor 8X, the smartphone is priced in India starting at Rs. 14,999 for the 4GB RAM + 64GB storage option, and it will go on sale exclusively via Amazon India from October 24 onwards. The smartphone will be available in Black, Red, and Blue colour options.

Meanwhile, the Redmi Note 5 Pro was launched in the country priced at Rs. 13,999, but it was later raised to Rs. 14,999 for the 4GB RAM, 64GB storage variant. Colour options for the smartphone are Black, Gold, Lake Blue, and Rose Gold, and it is sold across Flipkart and Mi.com.

Comparatively, the price in India of Nokia 6.1 Plus is Rs. 15,999 for the sole 4GB RAM + 64GB storage option. It comes in Gloss Black, Gloss White, and Gloss Midnight Blue colour options, and is sold via Flipkart and Nokia online store.

Lastly, the Realme 2 Pro price in India starts at Rs. 13,990 for the 4GB RAM + 64GB storage model, and is the cheapest of this lot. The smartphone comes in three colour variants - Black Sea, Blue Ocean, and Ice Lake, and is sold exclusively via Flipkart.

Honor 8X vs Redmi Note 5 Pro vs Realme 2 Pro vs Nokia 6.1 Plus specifications

All the phones support dual-SIM slots and run on Android 8.1 Oreo with customised skins on top, except for the Nokia 6.1 Plus which delivers the stock Android experience, and is also a part of the Android One program.

Realme 2 Pro vs Honor 8X vs Nokia 6.1 Plus vs Redmi Note 5 Pro comparison

Google to Charge Licensing Fee for Its Android Apps, Unbundle Chrome and Search in Europe
Facebook Now Says Data Obtained Through Portal Can Be Used to Serve You Ads