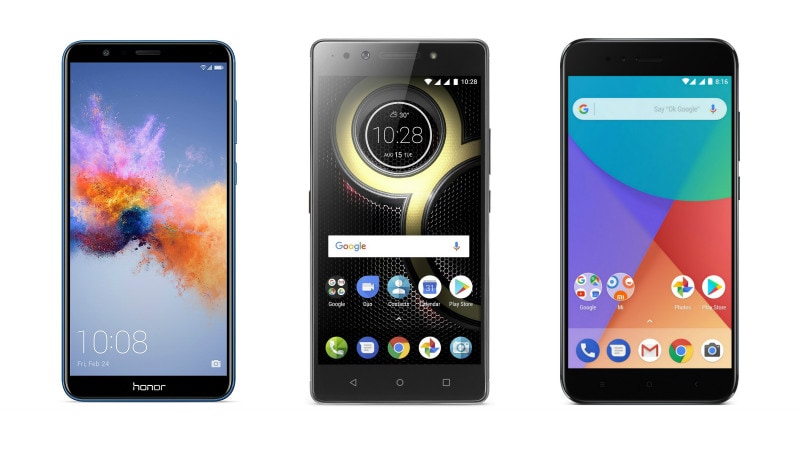 Earlier this month, Huawei's Honor brand launched the Honor 7X to offer features such as a dual camera setup and a thin-bezel display at an affordable price point. The new Honor smartphone is the successor to the Honor 6X, which gave tough competition to the compelling offerings by companies such as Samsung, Lenovo, and Xiaomi. The cost-efficient features of the Honor 7X make it a strong contender against the Lenovo K8 Note that was debuted earlier this year as a package for entertainment and photography lovers. The sub-Rs. 15,000 price of the Honor 7X even brings it against the Xiaomi Mi A1 that is the company's first Android One device. The Mi A1 is already one of the most popular models in the affordable segment and is a decent option with a twin back-facing cameras and a metal body. We are here taking a look at all major differences between the Honor 7X, Lenovo K8 Note, and the Xiaomi Mi A1 to help you choose the best option for you.

The Honor 7X price in India is Rs. 12,999 for the 32GB storage variant, while its 64GB variant is priced at Rs. 15,999. Both these variants so far available in the country via Amazon India through a flash sale model. Each of these variants comes in Black, Blue, and Gold colour options.

The Lenovo K8 Note, on the other hand, is available in two variants - 32GB variant at Rs. 12,999 and 64GB variant for Rs. 13,999. It is exclusively available on Amazon India and comes in Venom Black and Fine Gold colour options.

Similarly, the Xiaomi Mi A1, which was launched in India back in September at a price of Rs. 14,999, is currently available for Rs. 13,999. The smartphone is available for purchase through various online and offline channels in the country, including Flipkart, Mi.com, Sangeetha, Poorvika, Big C, LOT, and UniverCell among others. It comes in multiple colour options, including the latest Special Edition Red and the recent Rose Gold variant.

The Honor 7X runs Android 7.0 Nougat-based EMUI 5.1 and features a 5.93-inch full-HD+ (1080x2160 pixels) IPS display. Under the hood, the smartphone has Huawei's octa-core HiSilicon Kirin 659 SoC with four cores of Cortex-A53 clocked at 2.36GHz and four cores of Cortex-A53 at 1.7GHz, paired with 4GB RAM. There is a dual camera setup on the back with a 16-megapixel primary camera sensor and a 2-megapixel depth sensor, along with PDAF technology and an LED flash. On the front, there is an 8-megapixel selfie camera.

In terms of storage, the Honor 7X has 32GB and 64GB options that both have microSD card support to expand the onboard storage (up to 256GB). The smartphone has 4G VoLTE, Wi-Fi 802.11 b/g/n, Bluetooth v4.1, GPS/ A-GPS, 3.5mm headphone jack, and Micro-USB. Besides, there is a 3340mAh battery, and the smartphone packs a rear-facing fingerprint scanner.

The Android 7.1.1 Nougat-based Lenovo K8 Note has a 5.5-inch full-HD (1080x1920 pixels) display and a deca-core MediaTek MT6797 SoC with four Cortex-A53 cores clocked at 1.4GHz, four Cortex-A53 clocked at 1.85GHz, and two Cortex-A72 cores clocked at 2.3GHz. Also, there is either 3GB or 4GB of RAM. The smartphone has a dual rear camera setup with 13-megapixel and 5-megapixel depth sensor. The rear camera system has a dual-LED CCT flash module. On the front, there is a 13-megapixel camera sensor with an LED flash. Further, the smartphone has a dedicated microSD card to expand the built-in storage.

The Android 7.1.2 Nougat-running Xiaomi Mi A1 features 5.5-inch IPS display with full-HD (1080x1920 pixels) resolution. The smartphone has an octa-core Qualcomm Snapdragon 625 SoC, coupled with 4GB of RAM. On the imaging side, there are two 12-megapixel image sensors - one with a wide-angle, f/2.2 lens and in 1.25-micron pixel sensor and the other one with an f/2.6 aperture telephoto lens. The camera system offers 2x optical zoom and comes with a dual-LED flash. There is also a 5-megapixel camera sensor on the front with a real-time beautification mode.

Xiaomi has given 64GB onboard storage on the Mi A1 which is expandable via microSD card (up to 128GB). The smartphone has 4G VoLTE, dual-band Wi-Fi 802.11ac, Bluetooth, USB Type-C port, and a 3.5mm headphone jack. Moreover, the handset packs a 3080mAh battery.

Among the three, the Honor 7X has a FullView display that has minimal bezels and 18:9 aspect ratio. This gives the smartphone a similar size to its competitors while bearing a taller screen. There is also a proprietary EMUI 5.1 on top of Android Nougat that comes with a custom interface and includes apps such as HiCare customer support app and HiGame gaming app store. Further, the handset has a Pro Photo mode that helps you adjust your shots with preloaded manual settings before hitting the on-screen shutter button.

The Lenovo K8 Note, on the other side, comes with Dolby Atmos Audio enhancement support. The smartphone also has a water repellent design that is not equivalent to a water resistant build but survives light splashes. There is a vanilla Android experience with a pure interface, bundled with standard Google apps such as Duo, Play Movies, and Play Music. Additionally, the Lenovo smartphone has TheaterMax VR support that you can utilise to watch immersive content on a VR headset.

The Xiaomi Mi A1, amongst the three competitive models, is backed by Google's Android One programme that is aimed to deliver a bloatware-less Android experience. The smartphone sports an infrared emitter that transforms it into a universal remote controller. Also, the build of the Mi A1 is made with dual pyrolytic graphite sheets to dissipate heat effectively. There is a 10V smart power amplifier to enhance audio through earphones, and audio calibration algorithms come preloaded to enhance audio through a connected headset.