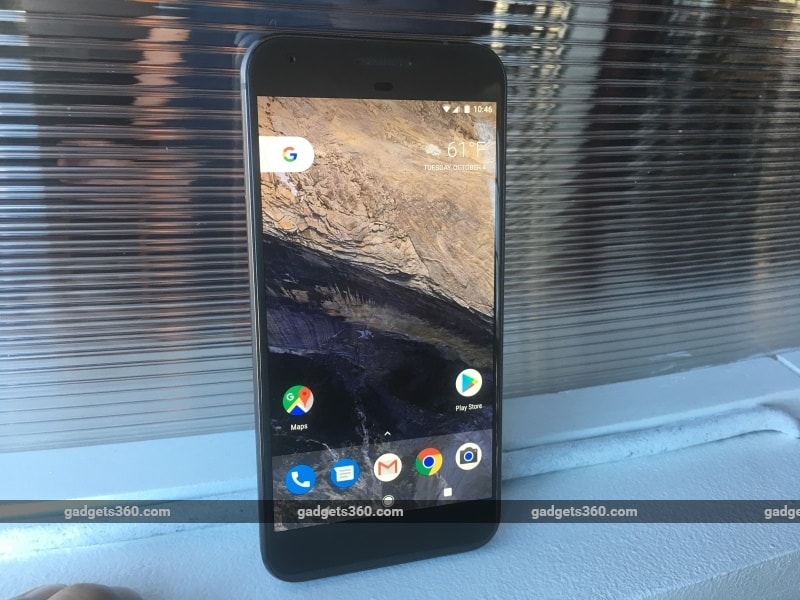 The Google Pixel smartphones come in three colours with rather descriptive names - Quite Black, Very Silver, and the limited edition Really Blue. Readers should note that the Really Blue colour variant will not be launched in India, at least initially, while Quite Black and Very Silver will be available for pre-orders starting October 13.

The Pixel retail box packs a Pixel smartphone, a USB Type-C cable for charging and media transfers, a Quick Switch Adapter for easy OS to OS data transfer, and a quick guide from Google.

As you can see, the Really Blue colour variant of the Pixel smartphone certainly does stand out. There is a fingerprint scanner mounted at the back with a 12.3-megapixel rear camera with its flash on the top, with the speaker fixed next to it in both Pixel and Pixel XL.

We also got our hands-on the Quite Black and Very Silver variants of the Pixel smartphones. The smartphones have an 8-megapixel front-facing camera with a Sony IMX179 sensor, an f/2.4 aperture and 1.4-micron pixels.

Under the hood, the Pixel smartphones share all the specifications except the display size. Both phones are powered by Qualcomm Snapdragon 821 processor, with two cores clocked at 1.6GHz, and two cores clocked at 2.15GHz. The Pixel and Pixel XL will pack 4GB of LPDDR4 RAM and sport the Pixel Imprint fingerprint sensor.

Notably, the Pixel and Pixel XL do have 3.5mm jack at the top, unlike Apple's 'courageous' iPhone 7 and iPhone 7 Plus launched in September, despite sporting a USB Type-C port.

Pixel smartphones are the first in a row to come with the all-new Google Assistant, a smart personal digital assistant to rival against Apple's Siri, Microsoft's Cortana and Amazon's Alexa.

The smartphones have USB Type-C for charging at the bottom, and the volume rockers and power button on the right.

Google Pixel and Pixel XL will be up for pre-orders starting Tuesday in the US, UK, Australia, Canada, and Germany. India is one of the first six countries where the Pixel phones will be launched.

Starting October 13, Flipkart, Reliance Digital, Chroma, and other retailers will begin taking pre-orders for the Pixel and Pixel XL smartphones. The price of the smartphones will start from Rs. 57,000 for the base variant in India. For more details on the pricing in India, read the India price list.

Google Home: What It Is, What It Does, and When You Can Buy It
Call of Duty: Modern Warfare Remastered - All You Need to Know