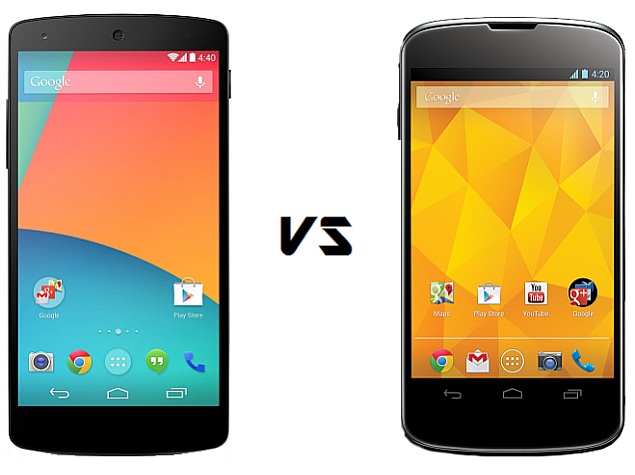 Google and LG finally unveiled the much-awaited new Nexus smartphone, the Nexus 5 with significant changes - they have made the smartphone more powerful, apart from lighter and thinner. The Nexus 5 is also meant to be the platform lead device for Android 4.4 KitKat, showcasing the potential of the new OS. Here is how the Nexus 5 squares up against the Nexus 4, its predecessor, and platform lead device for Android 4.2 Jelly Bean.

Display
Google and LG have decided offer a bigger display with the Nexus 5. It features a 4.95-inch full-HD (1080x1920 pixel) IPS+ LCD display which boasts a pixel density of 445ppi, and comes with Corning Gorilla Glass 3. On the other hand, the Nexus 4 sports a 4.7-inch HD (768x1280 pixels) IPS+ LCD display with a pixel density of 320ppi, and Corning Gorilla Glass 2. We've yet to get our hands on the Nexus 5, and for now, can't take a call on which display is better for now (in terms of viewing angles, colour accuracry, brightness and contrast), with both featuring the same display technology.

Camera
The Nexus 5 sports an 8-megapixel rear camera with OIS, a new addition to Nexus smartphone line-up. It also houses a 1.3-megapixel front-facing camera. On the camera front, the Nexus 4 was criticised for its relative average camera performance. However, Google has now acknowledged the issue and has introduced the optical image stabilisation (OIS) feature in the Nexus 5's camera, which should ensure sharper images and video. The rest of the imaging optics appears to be the same as the Nexus 4, with the same 8-megapixel sized rear camera, and 1.3-megapixel front camera. In addition, the camera app was also updated with Android 4.4 KitKat (which will make its way to the Nexus 4), with Photo Sphere for Panorama 360 degree shots; HDR+ mode for burst shots which automatically chooses the best shot.

Hardware
The Nexus 5 is powered by top-of-the-line 2.3GHz Qualcomm Snapdragon 800 processor, which is coupled with the Adreno 330 GPU. Its predecessor, the Nexus 4, is powered by 1.5GHz quad-core Krait Snapdragon processor with Adreno 320 GPU.

It seems for the Nexus 5, Google and LG decided to stick with the flagship tradition and chose the Qualcomm's latest processor, available on nearly all the recently launched flagship smartphones like the Samsung Galaxy Note 3, LG G2 and Sony Xperia Z1.

Notably, the Nexus 5 does not feature expandable storage with a microSD card slot, once again knocking the smartphone off a potential purchase list for some users - the lack of microSD card support was perhaps the biggest omission the Nexus 4 was criticized for. 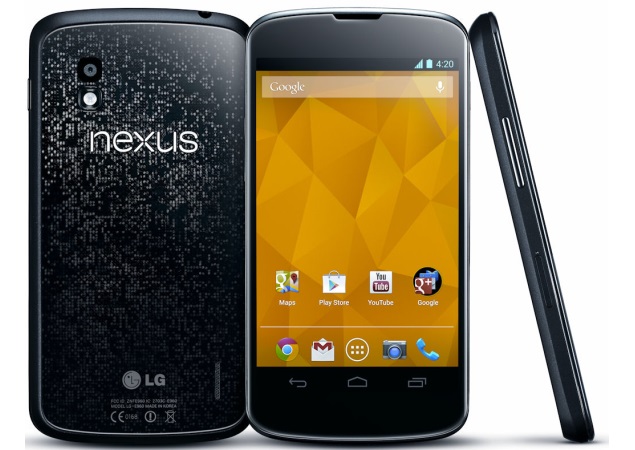 Design
The Nexus 5 at 8.59mm is definitely slimmer than the Nexus 4, which is 9.1mm thick. It is also lighter at 130 grams, compared to the Nexus 4's 139 grams. The overall design has been also re-worked and instead of the glass back seen on Nexus 4, the Nexus 5 comes with a Nexus 7 (2013) tablet style-panel, featuring a matte finish and prominent Nexus branding.

The Nexus 5 also features Android Beam, an NFC enabled feature which lets users share digital details with just a tap of smartphone. Other connectivity features included are wireless charging support, and Bluetooth 4.0, which are also available on the Nexus 4. T

Software
Google's new Nexus smartphone is the first device to run Android 4.4 KitKat out-of-the-box and is definitely an improved version of the Jelly Bean. The Nexus 4 will be receiving the update soon as well, and will have all the same features - so, only the preloaded aspect is different. The new features include a smart dialler, and Google-powered Caller ID. KitKat also brings the ability to wake the smartphone by just saying 'OK Google', a feature which was earlier seen on Moto X.

Overall
Those considering upgrading from the Nexus 4 to the Nexus 5 will get a better-specced device that will deliver much faster performance, new Android 4.4 KitKat software out-of-the-box, improved camera, upgraded battery and LTE support (though not for India).

Once again, like the Nexus 4, the Nexus 5 is a great deal for those looking for a value for money performance Android smartphone - just the Snapdragon 800 chipset at this price is a steal.

The Nexus 5 has now been listed on the Indian Google Play store with a pricing of Rs. 28,999, while the Nexus 4 has been removed from the store completely, though we expect online retailers to continue listing it for a while, without a price drop.