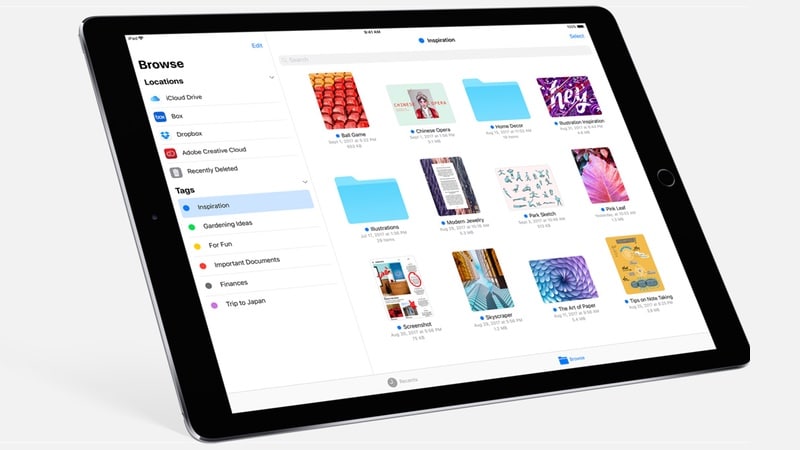 The Files app is one of the most significant changes in iOS 11. The iCloud Drive app no longer exists and instead we have an app called Files. With this, all of your files will be in one place — files from cloud storage apps such as Dropbox, and from other apps that expose documents such as PDF Expert 6, and even files on your local device. This provides a convenient way to manage all your files in one place and it works on both iPhone and iPad.

Files is still in early stages and if you are expecting a full-fledged file manager, you need to temper your expectations a little. At the moment, Files lets you access iCloud Drive and a local storage space called “On My iPhone” or “On My iPad” for files stored on your device. You can connect third-party services such as Google Drive to Files, but these open in a smaller pop-up screen and don’t take up the full screen. This lets you search through those files and copy them over to your local storage but it’s not an ideal solution for all your cloud storage services. You can’t select multiple files from Google Drive and copy them over to iCloud Drive, for example - you have to do this one by one. This is not Apple's fault, as it just requires developers to fully support files - just like how Dropbox did it.

Here’s what you need to do to get started with the Files app on iOS 11.

Now you will be able to see all of your files in one place. On our iPad, the Files app opened iCloud Drive files in the right pane, but some other apps opened in a pop-up. Files app lets you search for files inside other services such as Google Drive, but you can’t add tags to them, mark them as favourite, or add other metadata.

You can however save files from these other apps to iCloud Drive, or to your iPhone or iPad. From there, you can mark a file as favourite, add various coloured tags, and so on. The Files app can also open certain file types such as jpg and mp3, and if it can’t open a file you can always export the file to an app that can. If you save files locally on your iPhone or iPad, you can export them to other apps - so text documents could be sent to apps such as Ulysses or Microsoft Word, for example. Apps can't use Files to "share" documents with each other though, unlike with iCloud, where multiple apps can be used to edit the same file - here, you'll get a fresh copy of the document for the app it's been shared with.

In case you have installed apps that show up in Files, but are not signed in to those services, you can easily do that via Files. There’s no need to leave the app to sign in to Dropbox or Google Drive.

Can I create new folders inside Files?
At the moment, you can do that in iCloud Drive, but not on its local storage. We’re hoping that future updates will allow people to create folders in the “On My iPhone” or “On My iPad” folder.

Can I plug in a Lightning port-based pen drive and open it in Files?
No, at the moment you can’t do that. Lots of people have tried but the pen drive doesn’t show up in the Files app.

The Files app lets you quickly access files saved in multiple locations, but this is the first version of the app and it is quite limited in many ways. You can’t yet access files from your Dropbox folder the way you can access iCloud Drive files, and it’s not yet a central location for you to store all downloaded documents.