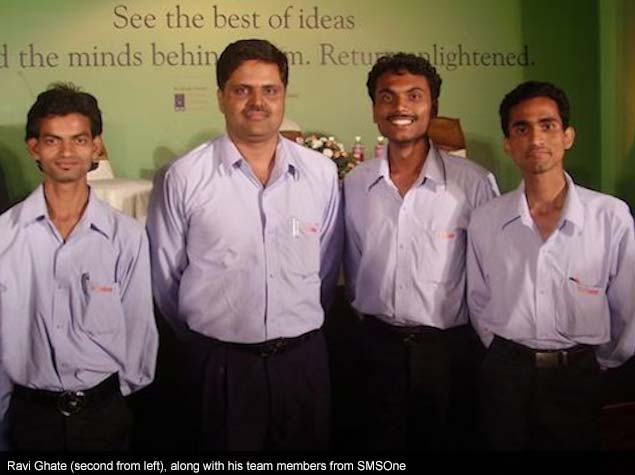 Ravi Ghate's office rooms, located off the busy Sadhu Vaswani Chowk in Pune, don't come across as the space of a successful entrepreneur who has touched a few lakh lives. But instead of developing a revenue model, he's developed not-for-profit projects instead.

Till 2004, Ghate was handling the ETH (Education To Home) network for the state of Maharashtra, where he had to spread educational content to 750 villages. But he found that he had to repeat the same basic instructions in each village so that they could use this new tool.

"It was frustrating to keep repeating the same thing to people. It was a waste of time and energy," he says. By the time he left ETH in 2005, he had devised the SMSOne project, which would use the SMS infrastructure to spread information in an effective manner.

Bridging the digital divide
His latest project is a not-for-profit, called eduVARTA. The project makes use of SMS as well, but as a way to connect students in rural areas, and urban areas. Ghate explains, "One of the most appalling things that we learnt about youngsters in the rural part of Maharashtra was that they didn't have a source for obtaining information, to study further. The problem of school dropouts is compounded, because even now youngsters have no clue how studying further will help them. The whole idea of studying further and improving their lives sounds redundant. And why wouldn't it sound so? No one there to guide them, no information about better prospects, and a massive inferiority complex, courtesy the caste system, economic backgrounds, and even a limited knowledge of English. That is when the eduVARTA project took shape," says Ghate.

Ghate started eduVARTA in 2012, and it runs from March to August. Ghate says that it is during this time every year that the board exams, and all major entrance and competitive exams take place in the state. Ghate says he has put up notices in schools in rural Maharashtra giving a helpline number for students, for higher education counseling. He says this number connects to students from almost 70 colleges in Pune.

"The students belonged to different streams - medicine, engineering, arts, science, commerce, management, computers, UPSC and MPSC," Ghate says. "This gives the school students in villages information directly from someone pursuing the course. It helped the students in the rural areas get information, but also become more confident," he adds.

For an annual price of Rs. 33, a student can register to get alerts on SMS about exam dates, results, and the like. Under it a total of 100 SMS messages would be sent. In 2012 there were 10,000 students who, Ghate reached out through the project and the number doubled in 2013. Ask him about his predictions about 2014 and he says, "I want to say we will reach out to 40,000 children but that is not me. We hope that we can reach out to as many students as we can."

Microblogging before Twitter
Like eduVARTA, Ghate's previous project was also not for profit, and despite a large reach in urban India, he's been replicating the model for others for free. In 2005, before Twitter made microblogging a thing for the world at large, Ghate had set up SMSOne, to solve the problem of reaching out to people in rural areas, in 160 characters or less.

He's been running SMSOne for seven years now and has been granted awards for the tool. The National Youth Award in 2007 at the hands of the then president Dr APJ Abdul Kalam, the Clinton Global Initiative Yes Fund Award in 2008, the NASSCOM Foundations Social Innovation Honour Award in 2009 are a small list of awards that he has won for his work. Modesty remains the name of the game for Ghate who still travels by the cheapest mode of transportation available, and prefers to live a simple life.

The concept of SMSOne is simple - Ghate organises micro-communities, of around 1000 families. Each of these communities gets a local representative who gathers news of interest to that small group, and sends his to Ghate. This news is then collated and sent back to the members of the community by Ghate, along with one commercial message per news SMS (this pays for the project).

Clarifying that the project is different from a mass SMS model Ghate says, "A micro-community newsletter has area of 10 kilometres and a local representative sends the message out to around 1500 families. The news in Pune district is different from that in Ratnagiri district, or from Amravati district." In contrast, he points out that a mass SMS is sent out to usually one lakh people, and is commercial in nature.

Ghate pays the local coordinators between Rs. 3,000 and Rs. 6,000, and has also been focusing on college dropouts as he sees this role as a chance for them to improve their standing in the community and gain respect by helping their own communities.

The first community newsletter began in Pune in 2006, reaching the semi-urban and rural areas of the district. "And it worked," says Ghate excitedly. "Back then, you have to understand that India was not connect as well as it is today by mobiles. And even the connectivity was limited to the urban areas. People in the rural areas were just deprived of information," he adds.

It might sound like a tall order, but the SMSOne project which began in 2006 eventually reached out to 750 communities across the state, and it has been replicated by him, with the help of local coordinators and volunteers in parts of South India too.

In fact just to show how important the work in the rural area done by Ghate is, a recent study by the Internet and Mobile Association of India (IAMAI) and IMRB International suggests that local language is the single largest driver of internet growth in rural areas. It also found that local language penetration was around 42 per cent amongst active internet users in rural areas and the most popular languages for local content were Hindi, followed by Marathi and Tamil.

Under the SMSOne Project, the local news reporters gathered information about weather, government policies, educational and health related news for their particular areas and Ghate would compose them into SMS messages which were then circulated in the respective communities. He says that for people who still don't have access to information as such this is helpful. Anyone who wishes to take up the SMSOne project for his or her area, now just contacts him, and Ghate helps set up the infrastructure, but that's all.

The changes in technology mean that it's not just urban users who have access to the internet on their phones anymore though, and this is something Ghate is excited about. With low-cost smartphones coming in big time, Ghate too has started altering strategies. He says cross-platform apps will be the next thing for social revolution and development. "I am working on using apps like WhatsApp and Facebook to reach out to more people in the rural areas. Another such app is the VIP-Common 10-digit helpline, where people can connect to their local political representatives to discuss their issues. Again problems in India are community specific. They have to be addressed in a similar manner. I have thought of tapping into village panchayats too, to create apps that will help them reach out to people in the villages," he says.