The Best Mobile Phones of 2018 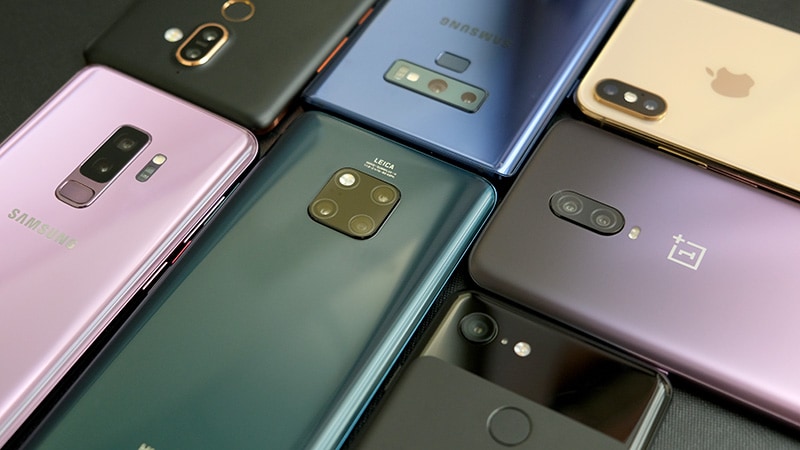 We've seen a lot of great phones in 2018 but only few have managed to pass our stringent tests and come out with flying colours. We have the usual suspects and some rather unsuspecting entries too, which have managed to wow us with their performance and versatility.

All the phones we've chosen have been reviewed by us and have ranked high in our ratings scale. So without further ado, let's take a look at some of the best smartphones that we came across in 2018, listed in no particular order.

1. Apple iPhone XS and XS Max
Apple rarely has a dull year with its iPhones but in 2018, the new iPhone XS (Review) and iPhone XS Max (Review)offer a significant upgrade over last year's iPhone X. Although both generations might look very similar, the iPhone XS Max is a bigger version of the XS, featuring the largest display Apple has ever shipped on a phone till date. It's also the first phones to ship with the company's first 7nm SoC — the A12 Bionic. But perhaps the biggest change comes in the form of a brand new primary camera.

2. Huawei Mate 20 Pro
Huawei saved the best for last with a masterstroke of a phone, which is the Mate 20 Pro (Review). The phone launched in October and only made its way to India last month, but boy, was it worth the wait. If we had to pick a near-perfect smartphone in 2018, then the Mate 20 Pro easily makes the cut. In fact, apart from the slightly inconsistent fingerprint sensor, it's really hard finding fault with this phone.

It features a gorgeous display, excellent built quality, a powerful CPU, and a very versatile trio of rear cameras. It's also the only phone right now that can wirelessly charge other phones. How's that for a headlining feature? At Rs. 69,990, it also offers tremendous value, as far as flagships go.

2. Google Pixel 3 and Pixel 3 XL
Google hit the mark with its third attempt at a flagship phone. The Pixel 3 XL (Review) and Pixel 3 (Review) boast of a more modern design compared to last year's models, but more importantly, they have managed to improve an already awesome set of cameras. However, the real start of the show in Pixel phones has always been the software, and this year, Android 9 Pie really shines.

From its intuitive UI features to cool camera modes like Night Sight, which completely changes the way we think of low-light photography. The phones themselves offer incredible performance, excellent build and battery life. The Pixel 3 starts at Rs. 71,000 while the Pixel 3 XL starts at Rs. 83,000.

4. Samsung Galaxy Note 9
Believe or not, people still love using a stylus with their smartphone, which is why Samsung's Galaxy Note 9 (Review) is going strong. In 2018, Samsung has elevated the S Pen experience by adding Bluetooth support to it so you can do things like remotely trigger the camera shutter for a group selfie.

Battery life still solid; the display is easily one of the best in the business and the cameras have been tweaked to deliver more neutral colours, which was a slight issue with the Galaxy S9 series. As premium as the phone looks and feels though, there's no getting round the fact that it's quite heavy and bulky to carry around. The Samsung Galaxy Note 9 starts at a price of Rs. 67,900 for the 128GB model.

5. OnePlus 6 and 6T
OnePlus has earned its reputation of being a disruptor in the smartphone space and in 2018, we got its finest offering yet. The OnePlus 6 (Review) launched in May this year and with it, brought the power of Qualcomm's finest mobile chip at a relatively affordable price. It also offers excellent build quality; smooth performance and one of the best Android skins around.

However, less than six months later, we have a little refresh in the form of the OnePlus 6T (Review), which offers refinements like a bigger battery, a smaller notch and an in-display fingerprint sensor, but at the cost of losing the 3.5mm headphone socket. You can still buy the Oneplus 6 on Amazon for Rs. 34,999, while the price of the OnePlus 6T starts at Rs. 37,999.

6. Asus Zenfone 5Z
The Asus ZenFone 5Z (Review) is a response to the OnePlus 6, which not only matches it pretty much every possible way, but the icing on the cake is that it costs a lot less. It offers the same powerful Qualcomm SoC, useful software features, superb build and design, very competent cameras and ships with some pretty good earphones in the box. The Asus ZenFone 5Z starts at a price of Rs. 29,999.

7. Samsung Galaxy S9 and S9+
Samsung's Galaxy S line has always been reliable as far as flagships go and this year's Galaxy S9 (Review) and Galaxy S9+ (Review) are no exception. The one thing that really grabs your attention is how good that look and feel in your hand. We also have to give props to Samsung for not falling prey to the whole ‘notch' trend and sticking to a design that has worked well for it in the past.

Both phones offer excellent features, battery life, snappy performance, killer displays and great cameras. These two are also the first phones to feature a physically variable aperture in a phone camera. The bigger, plus model, will get you a second telephoto camera for optical zoom, slightly better battery life and of course, a bigger display. The Samsung Galaxy S9 starts at Rs. 57,900 while the Galaxy S9+ starts at a price of Rs. 64,900.

8. Xiaomi Redmi Note 5 Pro
Xiaomi has launched a couple of landmark phones which have changed the landscape of the mainstream segment. The Redmi Note 3 (Review) was one such phone that comes to mind and in 2018, we have another killer smartphone called the Redmi Note 5 Pro (Review). This was the first phone to debut Qualcomm's Snapdragon 636 SoC — a chip that's now easily found in many top-ranking phones in the Rs. 15,000 segment.

If you can look past Xiaomi's bloated custom skin, there's a lot to like here. The phone has a great display, very good build, a good set of cameras and at the time, offered the best value any budget-shopper could ask for. Despite Xiaomi rolling out the Redmi Note 6 Pro, the Redmi Note 5 Pro is still going strong at a starting price of Rs. 13,999.

9. Asus ZenFone Max Pro M1
After seeing the massive success that was the Redmi Note 5 Pro, Asus decided to try its hand at the same formula and delivered a winning smartphone. The Asus ZenFone Max Pro M1 (Review) excels when it comes to the build and design, has a bright and vibrant display, good cameras, speedy performance and best of all, starts at Rs. 10,999, thereby undercutting Xiaomi's offering. A few months later, Asus launched a new version of the phone with 6GB of RAM and upgraded front and rear cameras, which is priced at Rs. 14,999.

10. Huawei P20 Pro
The Huawei P20 Pro (Review) was the first phone to launch with three rear camera sensors, which really set the ball rolling for many other flagship phones to come. The big highlight is the 40-megapixel primary sensor which delivers amazing pictures under pretty much any lighting. It also has a monochrome sensor to help out with details and a telephoto sensor, for some optical zoom action.

More than the cameras, the phone also feels incredibly premium, has a feature-rich Android skin, and good overall performance. The smartphone is currently selling for Rs. 59,999 on Amazon but honestly, with the Mate 20 Pro around, we'd recommend ponying up the extra cash and getting that instead.

11. Nokia 7 Plus
The Nokia 7 Plus (Review) is an incredibly likeable smartphone and packs in all the necessities one would expect from a Rs. 25,999 smartphone, without short-changing you. Even though it lacks a notch, the design still looks very good and it feels every bit as premium as its higher-end siblings. It also packs in powerful processor, is part of the Android One program, which guarantees timely updates and has a decent camera to boot.

12. LG G7+ ThinQ
LG took its time in getting the G7+ ThinQ (Review) to India but when it did, it did it with a ridiculously good price. At Rs. 39,990, it now competes directly with the OnePlus 6T and offers flagship-level features too like wireless charging and IP68 waterproofing — two things the Oneplus 6T still lacks. It also has a good display, a very loud speaker, above-average cameras, and reliable all-round performance.

13. Apple iPhone XR
Besides its staple flagship duo, Apple also launched its “affordable” iPhone XR (Review) with a starting price of Rs. 76,900. Size-wise, the phone sits in-between the iPhone XS and the iPhone XS Max and due to this, it enjoys a bigger battery compared to the XS.

While it shares many of the main features with its more premium siblings, such as the processor and cameras, it ditches the stainless steel body for an aluminium one; a lower resolution LCD display in place of an OLED one and doesn't have a telephoto camera. Just like the bigger iPhone XS Max, battery life is excellent.

These were our top picks of what we thought were some of the best phones in 2018. We'd love to hear your favourites in the comments.