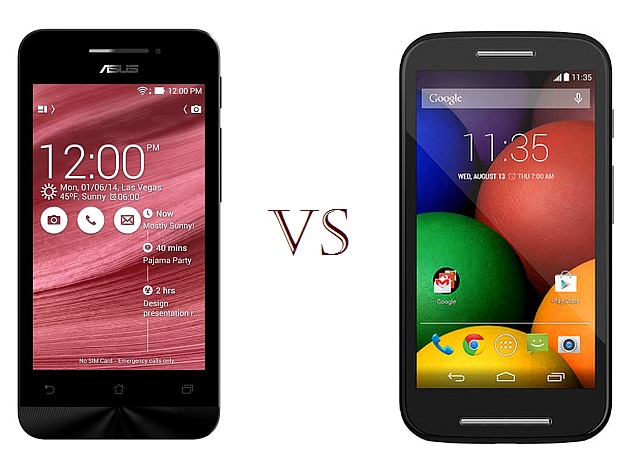 Asus launched the ZenFone 4 in India on Wednesday, priced at Rs. 5,999 for the 4-inch variant (A400CG). We decided to compare it to its closest competitor in the Indian market, the Moto E (Rs. 6,999), which has a very similar feature set.

Comparing the Asus ZenFone 4 A400CG and the popular Motorola Moto E, we see the Moto E has a slightly larger display (4.3-inch) and a slightly better resolution (540x960 pixels), and this also means the pixel density of the ZenFone 4's display is lower (233ppi vs the Moto E's 256ppi).

The Asus ZenFone 4 A400CG and Motorola Moto E are both dual-SIM devices, and both feature slots for Micro-SIM cards. Both the phones feature 1.2GHz dual-core SoCs, with ZenFone 4's Intel-based chipset providing 4 threads, compared to the 2 threads the Snapdragon 200 onboard the Moto E offers. Both feature 1GB of RAM.

While on paper this might mean the ZenFone 4 comes out ahead in terms of the chipset, we'll have to compare benchmark scores once the device comes in for review to see if it actually performs better than the Moto E.

The ZenFone 4 also features more inbuilt storage at 8GB, compared to the Moto E's 4GB. Notably, the Zenfone 4 offers microSD expandability up to 64GB, unlike the Moto E, which allows for a maximum of 32GB.

Another bone of contention, is the Android version onboard. The ZenFone 4 ships with Android 4.3 Jelly Bean, with a promised Android 4.4 KitKat upgrade (but no timeline provided). The Motorola Moto E on the other hand, comes with Android 4.4 out-of-the-box, and has already received an update to Android 4.4.4 KitKat, and may just be in line for the Android L update.

An important point of consideration, with the prevalence of selfies and video-calling, is the front-facing camera, and the ZenFone here comes out on top, featuring a 0.3-megapixel offering, while the Moto E has does not have one. Both phones feature 5-megapixel rear-facing camera.

In terms of connectivity options, both the Asus ZenFone 4 and Motorola Moto E are nearly identical, however, a big difference is the lack of FM radio connectivity on the ZenFone 4. This is an important feature for a country like India, where with the lack of widespread data connectivity, users look to radio airwaves for their news and entertainment. The Moto E has this feature.

Coming to the battery, the Moto E is the clear winner, featuring a 1980mAh battery compared to the Asus ZenFone 4's 1600mAh battery. Another small difference is the lack of an ambient light sensor on the ZenFone 4, or at least, the lack of a listing of the same. The Moto E does have the feature.

Another really minor difference is lack of colour options on the Moto E, which only comes in Black and White variants, while the ZenFone 4 comes in Black, White, Red, Gold and Blue. Of course, the Moto E does come with the option of interchangeable back covers, however, these are relatively expensive, currently retailing for Rs. 660 on Flipkart.