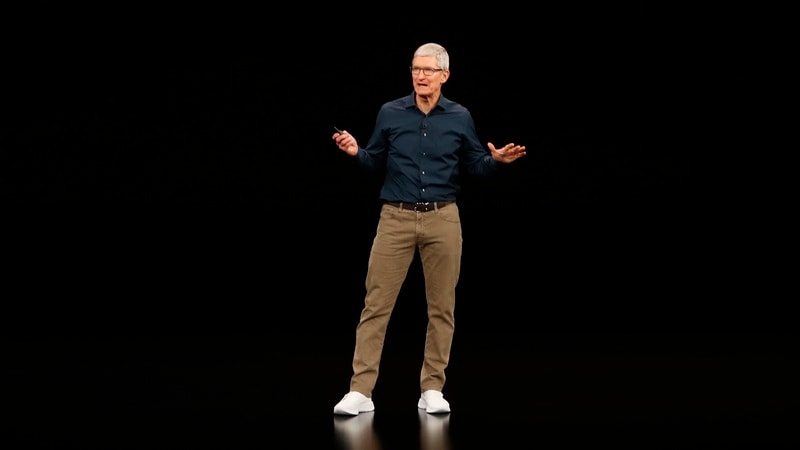 Apple's Tim Cook confirmed Wednesday that the latest iPhones, his flagship product, are not selling up to expectations. The news exposes his toughest challenge since taking over as chief executive officer from the legendary Steve Jobs: how to take the company forward when it's top product has lost lustre with consumers.

Cook has dealt with a series of controversies during his more than seven years in the role, ranging from the company's failed Google Maps replacement launch and the need to oust the head of iPhone software in 2012, to concerns over labour and tax practices. He has calmly navigated the politics of President Donald Trump's administration, and so far has avoided tariffs on the company's key devices as the US-China trade war widens.

Now comes the disclosure in a letter to investors that Apple sold fewer than anticipated new iPhones, and would cut its holiday quarter sales outlook by as much as $9 billion (roughly Rs. 83,000 crores). Cook plans to address Apple staff about the situation on Thursday at an all-hands meeting where he will take questions from workers, according to a person familiar with the matter.

“This is probably one of the hardest things Tim Cook has had to do as CEO, putting out that letter today,” said Michael Gartenberg, a former Apple marketing executive who has followed the company for decades. Daniel Ives, an analyst at Wedbush Securities, said “this is going to be the most defining moment of Cook's career.”

When he succeeded co-founder Jobs in 2011, Cook was well regarded for his supply chain mastery. He's leaned on lieutenants like design chief Jony Ive and marketing head Phil Schiller to dream up new devices.

He's also benefited largely from the success of the iPhone. It generates about two-thirds of the company's sales, but it produces much more revenue when accounting for services like Apple Music and attached devices like the AirPods and Apple Watch.

The stock price has gained 194 percent since Cook took the top job, share buybacks have been strong, and annual revenue has more than doubled. The iPhone's average sales price, revenue and unit sales have increased. That has allowed investors and analysts to mostly ignore the lack of new ground-breaking products like the iPhone across the Cook era and his delegation of product development to his staff.

The disclosure of lower-than-anticipated iPhone sales due to an economic slowdown in China and fewer upgrades to new models by existing users calls into question Apple's strategy of being so reliant on the device. The company's shares fell as much as 8.5 percent in extended trading. Apple's US and Asia suppliers also declined.

“It's a two-fold challenge: they need to prove that this is a blip, not a trend,” Gartenberg said. “We'll see a lot of efforts from Apple from marketing and PR to show that. For Tim, the other part is: How does Apple juice iPhone sales?”

Gartenberg said Apple may try to highlight its other products and reduce the attention on the iPhone “since the next major model isn't expected until September. We'll see Apple try to position the iPhone as more affordable.”

Wedbush's Ives said Cook has two choices: “Cut prices and figure out China and realise recent iPhone pricing was a mistake or they can have a sense of hubris and continue the current strategy.” He expects Cook will steer Apple toward the former.

Apple needs to look beyond its core product. Smartphone sales have stagnated and are virtually unchanged worldwide the past two years. Under Cook, Apple has launched a few new types of products, including AirPods and Apple Watch. Both, however, are glued to the iPhone. The company has talked about its services business as a significant new source of revenue - Cook said sales increased to $10.8 billion in the holiday quarter - but those are best used on an iPhone. Wholly new categories like self-driving car technology and augmented reality glasses still appear years away, while a major new iPhone for fifth-generation networks isn't expected until 2020.

For now, it appears Apple's iPhone sales problem is China-focused. According to analyst Shannon Cross of Cross Research, as long as the problem doesn't spread to other regions, Cook can weather the storm.

“It's going to rely on understanding the supply chains, how to make sure costs are efficient and effective,” which are Cook's strengths, Cross said.

Cook could also use this as an opportunity to reassess the company's reluctance to make industry-shattering acquisitions. His biggest deal to date was for Beats Electronics and Beats Music, which sold for a combined $3 billion in 2014.

For several years, analysts and investors have predicted that Apple could use its giant cash holdings to quickly break into new categories. Over the years, takeovers of Tesla Inc. and Netflix Inc. have been investor dreams.

“I've always been very clear,” Cook said in an interview Wednesday with CNBC. “We look at many, many companies including very large companies. We've elected so far not to do those because we haven't found one that we said, ‘wow, that's a nice intersection of Apple.' But I'd never rule it out.”