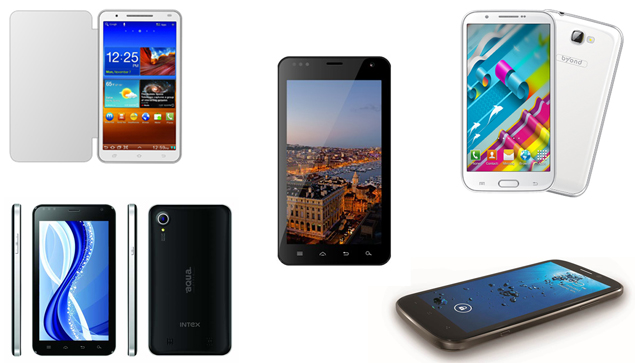 Phablets are the latest trend in the smartphone industry - thanks to Samsung which started the once-upon-a-time 'niche' category. After the success of the original Galaxy Note, many Indian manufacturers followed suit offering decent specs with larger screen sizes.

In case you're unaware, phablets are smartphone-tablet hybrids with screen sizes of 5-inches and above. This new category has created a lot of hype and to get you acquainted with it, we've put together a list of 5 devices over 5-inch screens. We decided to leave out the ones that have exactly 5.0-inch displays, in case you're looking to move on to 'bigger things in life'. The best part, all these devices cost less than Rs. 15,000, so they won't hurt your pocket either. 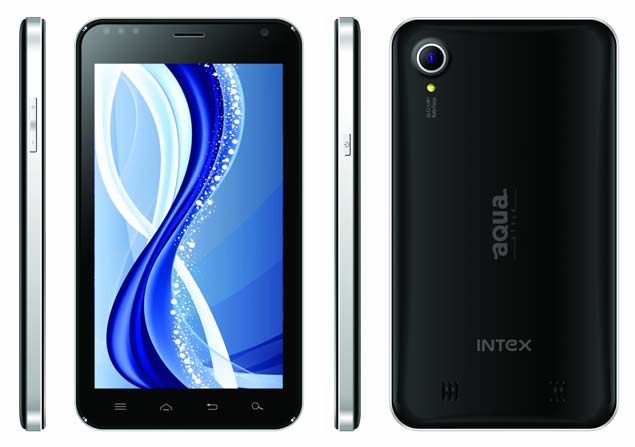 Intex is the latest company to join the above 5-inch pool of phablet offerings. The company has marked its spot in the category with the AQUA Style sporting a massive 5.9-inch capacitive touch display with a resolution of 480X800 pixels. The dual-SIM device comes with Android 4.0 pre-installed and features an 8-megapixel rear camera with flash and a 1.3-megapixel front camera as well.

It is powered by a 1GHz dual-core processor along with 512MB RAM, has 4GB of internal storage expandable up to 32GB via microSD and a 2,500mAh battery. Standard connectivity options include Bluetooth, Wi-Fi, 3G and GPS.

Pre-loaded apps on the AQUA Style include Gmail, Nimbuzz, Facebook, WhatsApp, Google Maps and YouTube. The Intex AQUA Style will be available in black and white colours, through Intex's exclusive retail stores (Intex stores) and popular multi-brand outlets. It was priced at Rs. 11,200 during launch but is now available for Rs. 10,799, making it the cheapest phablet in our list. 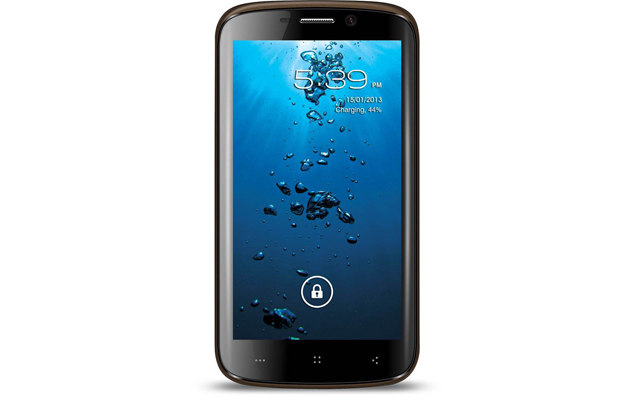 Spice is known for its Stellar series of phones that are offered at budget prices. The company recently added a phablet to the series in the form of the Stellar Pinnacle Mi-530 priced at Rs. 13,999.

Specs wise, the dual-SIM device (3G+3G) boasts a 5.3-inch qHD IPS display and runs on Android 4.0, though the company says it is upgradable to Jelly Bean. Imaging needs are taken care of by an 8-megapixel rear auto focus camera. However, the key highlight of the device is that it is the first ever budget smartphone to don a 5-megapixel auto focus front camera.

Underneath, the device is powered by a 1.2GHz dual-core processor with 1GB RAM. It comes with 16GB of internal storage that can be expanded by an additional 32GB via microSD. The 2,550mAh Li-ion-Polymer battery claims a talk-time of more than 4 hours.

Connectivity options include Wi-Fi, 3G/HSPA, Bluetooth 4.0 and an array of sensors. 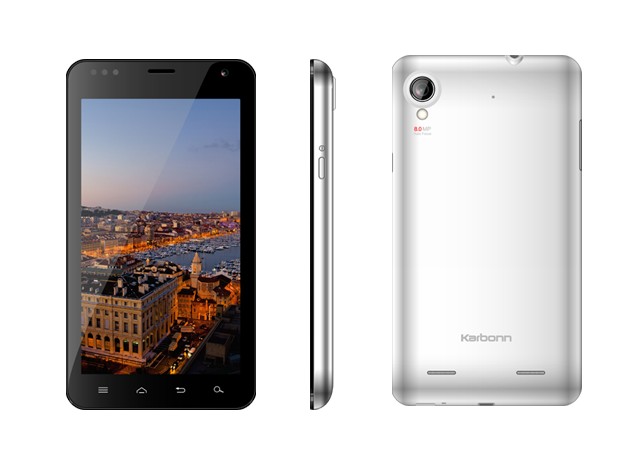 Karbonn is another home grown manufacturer known to launch products in quick succession. It was the first Indian manufacturer to enter the phablet scenario with the A30 Ta-Fone. The device was initially launched for Rs. 12,990 but can now be availed at a best buy price of Rs. 11,100.

The device directly competes with the Intex AQUA Style with almost identical features. It has a 5.9-inch capacitive touch display with 480x800 pixels. It also runs on Android 4.0 and features an 8-megapixel autofocus camera with LED flash and a 1.3-megapixel front-facing camera on-board as well.

On the inside, the device is powered by a 1GHz dual-core processor alongside 512MB RAM. It comes with 4GB of internal storage with external expansion options of up to 32GB.

Connectivity options on the Karbonn A30 - Ta Fone include, Wi-Fi, 3G, Bluetooth and USB.

The device supports dual-SIM functionality (3G+2G) and comes with a 2,500 mAh battery claiming up to 10 hours of talk time. Apps such as Facebook, WhatsApp, PayTM, Saavn and Karbonn Smart come pre-loaded on the Karbonn A30 Ta-Fone. Swipe is a California based company that has many tablets under its brand name. Now the company has partnered with MTV India and launched the MTV Volt boasting a 6-inch (854x480 pixels) capacitive 5-point multi-touch display. The device is priced at Rs. 12,999.

Unlike most other devices in this list, MTV Volt runs on Android 4.1 Jelly Bean out of the box. Like other phablets we mentioned here, it has an 8-megapixel rear camera with LED flash and a 1.3-megapixel front facing camera too.

Under the hood, this beast is powered by a 1GHz dual-core MTK 6577 processor with 512MB DDR3 RAM. There's 4GB of internal storage that can be expanded by another 32GB via microSD card. Another feature that makes this device stand apart is an inbuilt TV-player that offers on-the-go access to MTV and also features FM Radio with FM Transmitter. 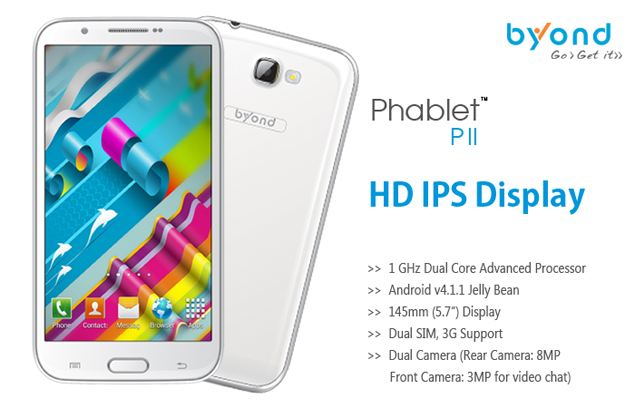 Here is a company that has launched not one but two phablets within a short span of 2 months. Byond was the first company to launch a 6-inch phablet literally named Phablet PIII priced at Rs. 14,999 (now available for Rs. 12,999), completely blurring the divide between smartphones and tablets. The company recently launched the Phablet PII as well at a best buy price of Rs. 14,999 that made it to this list.

The Phablet PII seems like an improvement over the PIII with a slightly trimmed down screen size and offering an HD resolution, though camera, processor, RAM and storage specs remain the same. It sports a 5.7-inch multi-touch HD IPS capacitive display with a 1280x720 pixel resolution. It also comes with Android 4.1.1 Jelly Bean. Again this was the first company in the under 15k category to launch a phablet with Jelly Bean straight out of the box.

The device is powered by a 1GHz dual-core processor alongside 1GB RAM. There is 4GB of internal storage that can be expanded by an additional 32GB via microSD. It comes with a 2,500 mAh battery claiming 100 hours of stand-by time.

The dual-SIM (GSM+GSM, single active, 3G-enabled) device features connectivity options like Wi-Fi, 3G, GPS and Bluetooth amongst an array of other sensors. It comes with social media apps like Facebook, Twitter, LinkedIn and Skype and games such as Angry Birds Rio and Temple Run are also pre-installed on the device.

This concludes our list of the 5 homegrown devices sporting over 5-inch screen sizes. That said, this is an upcoming category and is expected to attract more than a fair share of attention this year. Samsung has certainly sparked a trend with the Note and the Note II, which it launched in September 2012, motivating other device makers to come up with their own versions.

It wouldn't hurt to mention that the company also recently launched the Galaxy Grand Duos (Review I Pictures) in the country, which is the dual-SIM version of the Galaxy Grand, with a 5-inch screen indicating it's urge to compete with many Indian manufacturers on similar grounds.
Comments

Strong passwords and other security tips to protect yourself from hackers
NATO, European governments, hit by 'MiniDuke' cyber-attack