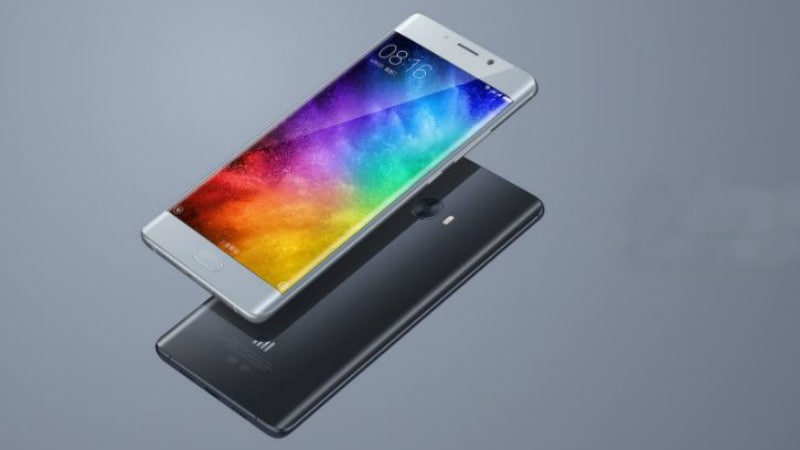 Xiaomi's new Mi Note 2 and Mi MIX phablets are the latest to tout 6GB of RAM under the hood, joining a small but growing club offering more memory than many laptops you will get on the market. There's only one smartphone with 6GB RAM in India right now, but if you're willing to import your phone, then there are now a number of different options. Here's a list of smartphones with 6GB RAM that have been released so far.

1) Xiaomi Mi Note 2
Xiaomi's new Mi Note 2, up for pre-orders in China presently at CNY 3,299 (roughly Rs. 34,000), is the latest smartphone with 6GB of RAM onboard, and is the only one on this list with a dual curved screen. The Android 6.0 Marshmallow-based smartphone sports a 5.7-inch full-HD (1080x1920 pixels) Oled display, comes with 128GB storage, and is powered by the 2.35GHz quad-core Snapdragon 821 Performance Edition SoC. It bears a 4,070mAh battery and Quick Charge 3.0 fast-charging technology, along with a fingerprint sensor on the home button.

For photography, the Galaxy C9 Pro has a 16-megapixel camera on both front and rear. The rear 16-megapixel camera comes with an aperture of f/1.9 and a dual-LED flash. The selfie camera too has the same aperture, sans the flash module. The phone comes with inbuilt storage of 64GB that is expandable via a microSD card (up to 256GB). It has a 4000mAh battery, with fast charging support.

3) OnePlus 3
Available at Rs. 27,999 in India, the OnePlus 3 (review) has 6GB RAM along with a Snapdragon 820 processor (two cores clocked at 2.2GHz, and two cores clocked at 1.6GHz). The smartphone features a 5.5-inch Amoled display running at full-HD resolution, and Gorilla Glass 4 protection. It runs OxygenOS based on Android 6.0.1 Marshmallow, and comes with 64GB internal storage (non-expandable). It has a home button with an integrated fingerprint sensor.

On the imaging front, OnePlus 3 has a 16 megapixel rear camera with a Sony IMX298 sensor, f/2.0 aperture, OIS and EIS, and PDAF autofocus, RAW image support, 4K video recording, and Smile Capture mode. The front camera bears a Sony IMX179 sensor, f/2.0 aperture on the fixed focus lens, and EIS. The smartphone has connectivity options like Wi-Fi, 4G LTE (support for all bands in India), Bluetooth 4.2, NFC, GPS/ A-GPS, and USB 2.0 Type-C port, along with a 3.5mm headphone jack. It is powered by a 3000mAh battery with Dash Charge fast-charging technology.

4) Asus Zenfone 3 Deluxe (ZS570KL)
Another smartphone with 6GB RAM that has been launched in India is the Asus Zenfone 3 Deluxe (ZS570KL), priced at Rs. 62,999. Despite unveiling the device in the country, Asus has not released it in the Indian market yet, though you can get one in the US at $499 (approximately Rs. 34,000). The smartphone has a 5.7-inch full-HD screen and runs on Android 6.0 Marshmallow-based ZenUI. Keeping everything running is a Snapdragon 820 processor. There's 64GB internal storage and users can expand this by another 256GB via microSD card.

Coming to photography, the Asus ZenFone 3 Deluxe (ZS570KL) packs a 23-megapixel primary camera on the rear and an 8-megapixel front shooter for selfies. The connectivity suite of the dual-SIM smartphone includes Wi-Fi, 4G-LTE, Bluetooth 4.2, USB OTG support, USB Type C and fingerprint sensor. It is powered by a 3000mAh battery.

5) LeEco Le Max 2
LeEco also announced the Le Max 2 (review) with 6GB RAM and 64GB internal storage in the Indian market, at Rs. 29,999. The phone was announced in June this year, but there has been no further word on when the device will go on sale; on the other hand, it is available in China at present for CNY 2,499 (roughly Rs. 25,000).

The LeMax 2 smartphone has a 5.7-inch QHD (1440x2560 pixel) screen, Snapdragon 820 chipset, Android 6.0 Marshmallow-based software, dual-SIM support, and fingerprint sensor. On the back, it sports a 21-megapixel camera with f/2.0 aperture OIS, phase-detection autofocus (PDAF), and two-tone, dual-LED flash, while an 8-megapixel selfie shooter with f/2.2 aperture is placed in front.

6) Xiaomi Mi MIX
Xiaomi Mi MIX, the concept smartphone unveiled by the Chinese brand in October 2016, is another smartphone with 6GB RAM. However, getting your hands on it will be rather difficult for you as only limited units of the device will be available when it goes on sale on November 4. The variant with 6GB RAM is priced at CNY 3,999 (roughly Rs. 40,000) and bears 18k gold trim on the rear camera and fingerprint sensor, which is not seen on the 4GB RAM model.

The Mi MIX has a 6.4-inch display with nearly no bezels on the side (91.3 percent screen to body ratio), 1020x2040 pixel resolution, and 302ppi pixel density. It sports a ceramic body as well as a piezoelectric acoustic ceramic earpiece speaker and ultrasonic proximity sensor. The smartphone has the 2.35GHz quad-core Snapdragon 821 processor under the hood and 256GB internal storage, and is powered by a 4400mAh battery with Quick Charge 3.0 fast-charging. On the back of the dual-SIM (Nano+Nano) smartphone is a 16-megapixel camera with phase detection autofocus, f/2.0 aperture and dual-tone LED flash, while a 5-megapixel snapper is in front for selfies.

7) Xiaomi Mi 5s Plus
In China this September, Xiaomi announced the 128GB variant of the Mi 5s Plus, its first smartphone with 6GB RAM; available only in China, the device is priced at CNY 2,599 (close to Rs. 26,000). The smartphone features a 5.7-inch pressure-sensitive display with full-HD resolution capable of 550 nits brightness and NTSC 94 percent colour gamut. It runs the MIUI 7 software based on Android Marshmallow, and is powered by the new 2.3GHz Snapdragon 821 processor.

The Mi 5s Plus bears a dual rear camera setup, with two 13-megapixel sensors - one for colour, and the other for black and white; it supports PDAF and two-tone, dual-LED flash. On the front is a 4-megapixel camera with 2-micron pixels and f/2.0 aperture for selfies. Connectivity options on board include 4G LTE connectivity with 3x carrier aggregation support, NFC, Wi-Fi 802.11ac, Bluetooth v4.2, fingerprint sensor, and GPS/ A-GPS. It has a 3800mAh battery with Quick Charge 3.0 technology that takes the battery from zero to 83 percent in 30 minutes.

8) LeEco Le Pro 3
Unveiled in the US and China and priced at $399 and CNY 2,999 respectively (around Rs. 30,000), LeEco’s Le Pro 3 (first impressions) is another 2.35GHz Snapdragon 821-powered smartphone with 6GB RAM. It has a 5.5-inch full-HD display with 2.5D curved glass, Android 6.0-based EUI 5.8 custom interface, and comes in 64GB and 128GB storage options. Its battery capacity stands at 4070mAh and it supports Quick Charge 3.0 for fast charging. The smartphone also has a fingerprint sensor on the back.

The 16-megapixel rear camera of Le Pro 3 has f/2.0 aperture, PDAF, two-tone, dual-LED flash, and HDR support; its 8-megapixel front camera has a 1.4-micron sensor and f/2.2 aperture. For connectivity, the smartphone has dual-band Wi-Fi, 4G-LTE, Bluetooth 4.2, NFC, Infrared, USB Type C and GPS/ A-GPS/ Glonass; however, it misses out on the 3.5mm earphone jack.

9) ZUK Z2 Pro
Lenovo’s Cyanogen-only brand ZUK unveiled the Z2 Pro smartphone with 6GB RAM and 128GB storage in April this year; the smartphone is available at CNY 2,699 (roughly Rs. 27,000). The smartphone has a 5.2-inch display with full HD resolution and Gorilla Glass protection and runs the Android 6.0 Marshmallow based ZUK 2.0 UI. The Snapdragon 820-powered handset has a fingerprint sensor in the hardware Home button.

10) Oppo R9s Plus
Oppo in October unveiled the R9s Plus phablet with 6GB RAM in the Chinese market at CNY 3,499 (approximately Rs. 35,000). The smartphone, featuring a 6-inch full HD screen, is powered by a 1.9GHz Snapdragon 653 octa-core processor and comes with 64GB built-in storage and microSD support up to 128GB. It runs Android 6.0 Marshmallow with Color 3.0 skin on top out-of-the-box and has a fingerprint sensor below the screen in the Home button.

There's a 16-megapixel Sony IMX398 camera sensor with f/1.7 aperture, dual-core focus, OIS, and LED flash. An additional 16-megapixel sensor is also housed in the front for selfies. It has a hybrid dual-SIM dual-standby card slot and supports connectivity features such as dual-band Wi-Fi, Bluetooth 4.0, A-GPS, and microUSB 2.0. The Oppo R9s Plus comes with a 4000mAh battery with VOOC fast-charging technology.

11) ZTE Nubia Z11
The ZTE Nubia Z11, unveiled in China and expected to launch in India soon, comes in a 6GB RAM variant priced at CNY 3,499 (around Rs. 35,000). The smartphone has a 5.5-inch full HD screen and is powered by a 2.15GHz quad-core Qualcomm Snapdragon 820 processor. The Android 6.0 smartphone packs 64GB of internal storage that can be expanded up to 200GB via a microSD card.

As far as the cameras are concerned, the ZTE Nubia Z11 comes with a 16-megapixel primary camera with PDAF, f/2.0 aperture, OIS, two-tone, dual-LED flash, and a 1.28-inch sensor with 1.12-micron pixels on the rear. Its 8-megapixel front shooter has aperture of f/2.4, while the pixel size is 1.4-micron. The dual-SIM smartphone has connectivity options for dual-band Wi-Fi, 4G-LTE, GPS, Bluetooth 4.1, NFC, Infrared and USB Type C. It has a fingerprint sensor as well as a 3000mAh battery with support for Quick Charge 3.0 technology.

12) Vivo XPlay5 Elite
The world’s first smartphone with 6GB RAM, the Vivo XPlay5 Elite, was launched in China at CNY 4,288 (approximately Rs. 43,000) has a 5.43-inch dual-curved Super Amoled screen with QHD resolution, and a metal body with Gorilla Glass coating. It is powered by a 2.15GHz Snapdragon 820 chip and runs the Android Marshmallow-based Funtouch OS 2.6 software. It has 128GB internal storage, but does not support microSD cards for storage expansion; on the back is a fingerprint sensor.

You can look forward to many more smartphones with 6GB RAM, with Samsung Galaxy S8 expected to join the league early next year and rivals such as HTC, Sony, LG likely to join the fray after that.