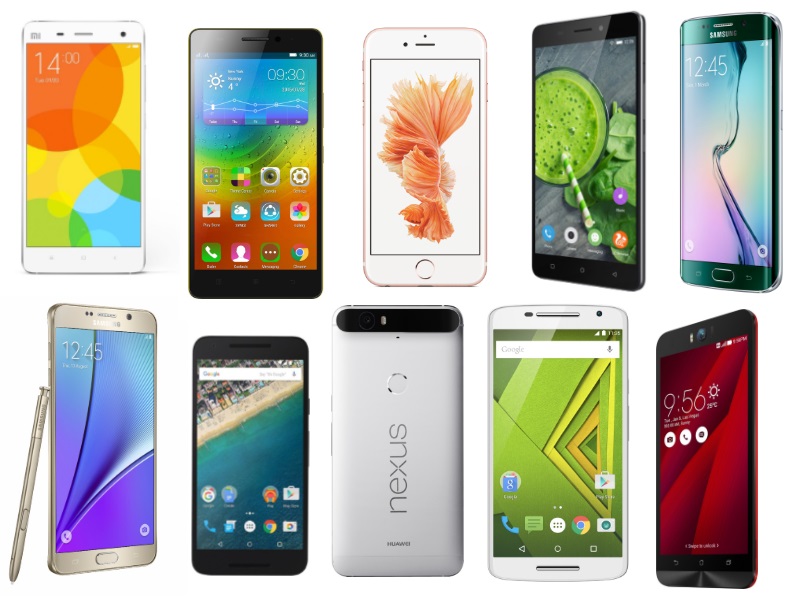 It's hard to whittle down the hundreds of smartphones launched this year into a list of just 10 favourites. We've seen some phenomenal advances, not just at the top end, but in every segment of the market. Speeds and resolutions always improve, but it seemed as though manufacturers wouldn't let even a few weeks pass between product launches this year - competition is so fierce that product recommendations can change from one day to the next.

A lot happened in 2015: fingerprint sensors went mainstream, metal displaced plastic in nearly every premium offering, big displays became normal, screen resolutions jumped off the charts, and cameras became seriously good. Features that were restricted to phones which cost over Rs. 40,000 not too long ago started turning up in models that sell for less than Rs. 10,000.

Here are our picks of the 10 phones that shaped the landscape of 2015 in India, in no particular order.

1) Samsung Galaxy S6 Edge
Easily on of the most beautiful consumer products of 2015, this is one smartphone you can't take your eyes or hands off. Samsung's display engineering, and manufacturing expertise clearly has no match, and the rest of the metal body is just as stunning. The processor is fast, the camera is fantastic, and even the software is appealing. If you want to be seen and noticed, this phone is well worth the premium over the equally capable Galaxy S6.

2) iPhone 6s
What list would be complete without an iPhone? Apple's 2015 model retains the styling of its predecessor, but a new force-sensitive touchscreen and significantly improved camera keep things fresh. The new iPhone's speed improvements are tangible, and the iOS ecosystem has plenty of diehard fans. While not a huge jump over its predecessor, the new iPhone is still an impressive device with few alternatives available that beat it.

3) Google Nexus 5X
Its bigger sibling, the Nexus 6P, might be getting more attention, but we love this phone for offering nearly all the same features at a much lower price and in a regular-sized body. It's fast, has a great screen, and a fingerprint sensor that just works. Of course, Android Marshmallow is one of the biggest draws. We'd go with the 32GB model since non-expandable storage is one of its very few major flaws.

4) Lenovo K3 Note
Chinese giant Lenovo made huge strides in the Indian smartphone market this year with a variety of models that flew off store shelves, but perhaps none more so than the K3 Note. This phone represents the best value you can get under Rs. 10,000, with specifications and performance that rival many phones that cost twice as much. It's a great device for anyone who needs a little more than the basics.

5) Xiaomi Mi 4
The Xiaomi Mi 4 burst onto the scene at the beginning of this year, with the company's trademark fanfare. The high-end hardware and lowball pricing had an immediate impact on competitors, and long after other phones would have been retired, the Mi 4 still feels premium. A promised update to Android 6.0 and a significant price cut will keep this one on our radar for some time still.

6) Moto X Play
The Moto X Play is an easy choice due to its dependability. It's not flashy or over-the-top but a solid smartphone that simply works. Being a Motorola, you can be assured of good build quality and timely software updates. The Moto X Play offers a Nexus-like near-stock Android experience, excellent all-round performance, improved battery life, and good camera. More importantly, it offers one of the best value propositions in the sub-Rs. 20,000 segment.

7) Samsung Galaxy Note 5
The Galaxy Note 5 is easily the best smartphone with a stylus in the market and one of the best high-end phones currently available. We love the Galaxy Note 5 for its aluminium-and-glass body and striking design. It also happens to have one of the best cameras of any phone today. The highlight of the Note 5 is its stylus, which can be used to boost productivity or simply get creative thanks to its pressure sensitivity.

8) Gionee Marathon M5
The Marathon M5 is the latest weapon in the war against bad battery life. With a 6020mAh battery, the M5 will easily let you do a 24-hour movie marathon on your phone. With regular use, one can go multiple days without needing a charge. The Marathon series from Gionee is all about battery life so other aspects of the phone take a back seat. The M5 makes it to our list purely because of its ability to outlast any other smartphone in the market.

9) Google Nexus 6P
The Huawei-built Google Nexus 6P is the kind of device that other smartphones look up to. Featuring Android Marshmallow with the stock user interface, the Nexus 6P is premium in every way. From the beautiful metal build, to the gloriously detailed screen, to the absolute power under the hood, the Nexus 6P is one of the best Android smartphones you can buy right now. The Nexus 6P also features an excellent set of cameras. And the icing on the cake? The ability to shoot in 4K or at 240fps 720p.

What was your favourite phone of the year? Tell us what you think in the comments below.

ASCI Upholds Misleading Advertisement Complaints Against Airtel, Flipkart
Your Phone Is a Lightsaber in This New Game From Google