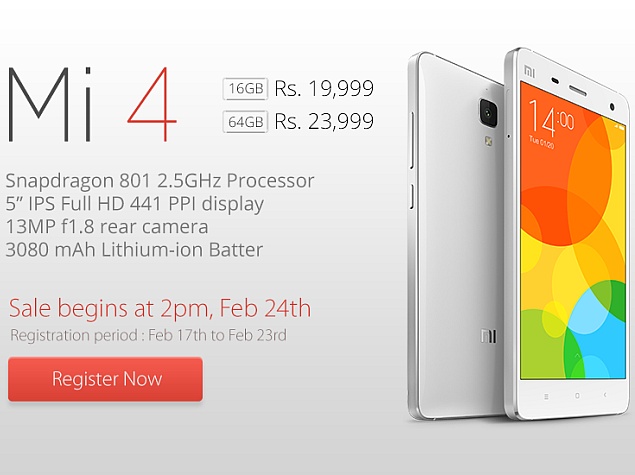 Xiaomi is making the 16GB and 64GB variants of the Mi 4 smartphone available for purchase in two separate flash sales on Tuesday via Flipkart. The Chinese company has not announced how many units of each variant will be available for the sale.

Update: Xiaomi India Head Manu Kumar Jain posted on Twitter that it took less than a minute for the 64GB Xiaomi Mi 4 to go out of stock in its first sale. No details about how fast the 16GB variant went out of stock were provided, nor the number of units that were on offer of both variants.

The previous Mi 4 flash sale also saw the company crack down on profiteers, cutting down on the time to buy the phone for those who added the phone to their carts. Users now have only half an hour to complete the purchase, as opposed to 4 hours earlier, which gave people enough time to 'sell' the unit to others for a premium and have it shipped to the buyer directly via Flipkart.

The Xiaomi Mi 4 runs on Android 4.4 KitKat with the company's MIUI 6 skin on top. It is powered by a quad-core Qualcomm Snapdragon 801 processor clocked at 2.5GHz alongside 3GB of RAM. The Mi 4 sports the same 5-inch full-HD display (1080x1920 pixels) found on the Mi 3; although this time the company has used a JDI OGS full lamination display.