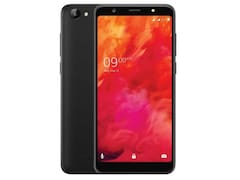 Lava Z81 mobile was launched in November 2018. The phone comes with a 5.70-inch touchscreen display offering a resolution of 720x1440 pixels at a pixel density of 282 pixels per inch (ppi) and an aspect ratio of 18:9. The display sports Gorilla Glass for protection. Lava Z81 is powered by a 2GHz quad-core MediaTek Helio A22 (MT6761) processor. It comes with 2GB of RAM. The Lava Z81 runs Android 8.1 Oreo and is powered by a 3000mAh battery.

Connectivity options on the Lava Z81 include Wi-Fi 802.11 b/g/n, GPS, Bluetooth v4.10, Micro-USB, FM radio, 3G, and 4G (with support for Band 40 used by some LTE networks in India) with active 4G on both SIM cards. Sensors on the phone include accelerometer, ambient light sensor, proximity sensor, and fingerprint sensor. The Lava Z81 supports face unlock.