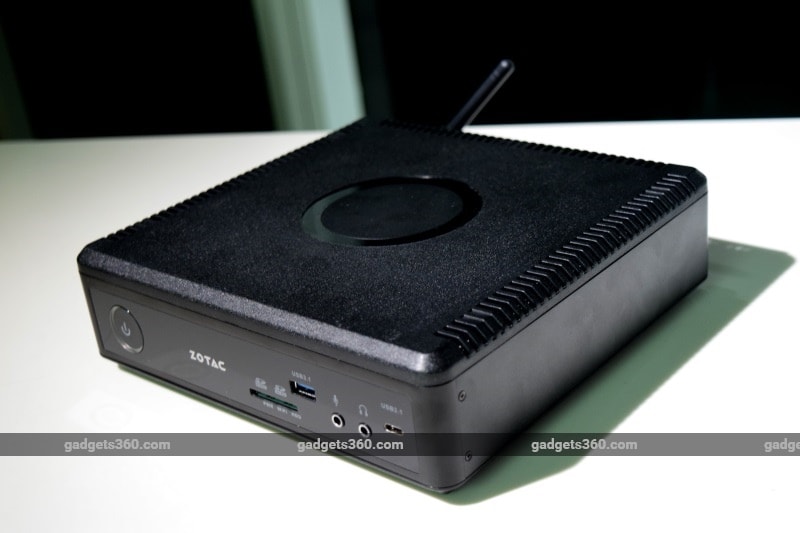 One of the most obvious differences between PCs and game consoles is that you can’t practically set up a full-sized PC in your living room and use it with your big-screen TV. On the other hand though, consoles lock you in to their ecosystems and aren’t very versatile. Enter Zotac, one of the world’s best known Nvidia partners, with its Zbox Magnus series of compact PCs designed specifically to fit in where no ordinary PC would be welcome.

With a device like this, Zotac hopes it’s giving you the best of both worlds. You get the flexibility of a gaming PC, and the convenience of a console. The company sells these boxes as barebones, which means you get only the motherboard, CPU and GPU which are pretty much fixed and not upgradable. You have to add your own storage, RAM and OS.

The current Zbox Magnus range comprises of models built around mobile versions of Nvidia’s GeForce GTX 1060, 1070 and 1080 GPUs. Note that Nvidia has dispensed with the M suffix for its mobile parts – you’re still getting slightly constrained versions of each. We have with us today the smallest and most affordable of the trio, the Zbox Magnus EN1060.

Zotac Zbox Magnus EN1060 look and feel
While today’s top consoles are slick glossy boxes with distinctive designs, the Zbox Magnus EN1060 looks a bit plain. It’s all black matte plastic except for the usual Zotac ‘O’ on top (which doesn’t light up) and a glossy front panel. The look might pass for industrial, thanks to the vents around the top and general boxiness of the whole unit, but we think that Zotac missed a bit of an opportunity here. It’s neither minimalist nor distinctive; somewhat like an oversized router or maybe a DTH set-top box.

However, it certainly is compact and light. If you need to travel a lot and take a PC with you, the EN1060 would work well. It does have a fairly large external power brick, like most powerful laptops, though. If you aren’t thinking of a living room setup but just want a compact non-AIO PC, this box would be extremely unobtrusive on a desk. It could also work very well for a kiosk or similar kinds of applications. The only thing it lacks is a VESA mounting option, even in the form of a bracket or sled.

The front panel has a large power button with an orange LED ring around it, an exposed SD card slot, USB 3.1 Type-A and Type-C ports, and two 3.5mm audio sockets. Hidden but also present is an Infrared receiver which should work with standard programmable remote controls (no remote is included). The front panel layout is a bit haphazard, and the text labels aren’t printed very cleanly – it’s this kind of attention to detail that Zotac needs to work on if it’s aiming for general consumer acceptance in this day and age.

On the back, there’s a DC power inlet, two USB 2.0 ports, two USB 3.0 ports, two HDMI 2.0 and two DisplayPort 1.3 video outputs, two Gigabit Ethernet ports, and a Wi-Fi antenna terminal. A short antenna is included in the box and can be screwed on within seconds. The fact that there are so many display outputs and Ethernet ports reinforces our opinion that Zotac was thinking of embedded and industrial applications for this model – all four video ports can apparently be used simultaneously which could be particularly interesting for full-motion high-resolution digital signage.

After removing two thumbscrews on the back, the bottom of the Zbox Magnus EN1060 slides off with very little effort. You have immediate access to the two SO-DIMM RAM slots, a 2.5-inch SATA bay, and an M.2 slot. We love the fact that we can have two SSDs or a secondary hard drive for bulk storage – obviously, we recommend going for a PCIe-based M.2 SSD for the highest possible performance. You’ll also see a mini-PCIe slot pre-populated with a Wi-Fi/ Bluetooth card. The fact that this is removable gives us another potential upgrade path.

Zotac Zbox Magnus EN1060 specifications and setup
While the star of the show is the GeForce GTX 1060 with its 6GB of dedicated VRAM, the CPU is no slouch either. It’s an Intel Core i5-6400T, which is interestingly a socketed 35W desktop part, with four cores running at between 2.2 and 2.8GHz. While it might be technically possible to upgrade the CPU and GPU, the EN1060 is not designed with access to those components in mind, and its thermal management capabilities are not likely to be able to scale very much.

You can have up to 32GB of DDR4 RAM and whatever combination of storage devices you like as per the slots available. Zotac has partnered with Mumbai-based hardware distributor PrimeABGB to offer SSD and RAM combo deals, and we tested our EN1060 sample with one such bundle – a single 16GB stick of Kingston HyperX Impact DDR4 RAM and a 480GB Kingston HyperX Predator M.2 SSD. These are both high-end units, and this particular combination costs Rs. 42,401, pushing the total price of the Zbox Magnus EN1060 as we tested it up to Rs. 1,16,000.

It took us less than two minutes to install our RAM and SSD, and we don’t think anyone should have a problem getting that done. Of course, you’ll have to install Windows (or your choice of OS) from scratch, and that’s potentially an extra cost as well. Zotac includes all drivers on a USB stick in the box, which is a nice touch, but we still downloaded all the latest ones from the company’s website. Everything went off without a hitch.

The USB 3.1 ports on the front work at full Gen 2 (10Gbps) speed, and each of the HDMI and DisplayPort outputs can handle up to 4K 60Hz displays as long as you have the right cables. There should be enough ports for anyone, and we’d recommend using a wireless keyboard and mouse or even a gamepad if you prefer a clean look.

Zotac Zbox Magnus EN1060 performance
We were hoping that the Zbox Magnus EN1060 would run cool and quiet, and for the most part, it does. There’s a very soft high-pitched whine which we could hear from up to a few feet away, but there’s no massive exhaust noise. At the most, you’ll hear the fans flutter when they come to life. The outside of the box stays cool at all times.

Windows 10 booted up quickly, and our 4K Asus PB287Q monitor ran at its native resolution and refresh rate as soon as we had the Nvidia drivers loaded. General performance was snappy, thanks to our SSD, and we had no trouble whatsoever with normal PC usage. We dipped into the BIOS for a look and found that it was a bit old-school in terms of layout and navigation. There are no deep tweaking options for fans, voltages and speeds, but no casual user should really miss these.

Performance benchmarks showed us scores in line with those of a modern mid-range desktop. We got 3,738, 6,129, and 2,586 in PCMark 8’s Home, Creative, and Work suites respectively. Cinebench gave us 422cb points, and POVray ran its render benchmark in 4 minutes, 9 seconds. If you buy the same SSD we tested with, you should expect performance in line with our SiSoft SANDRA scores of 938.67MBps and 899.1MBps for sequential read and write speeds.

We then played through a number of games manually to get a feel of the EN1060’s real-world performance. Doom (2016), as expected, ran like butter. We switched to the low-level Vulkan renderer and used the game’s built in diagnostic display, and observed performance in excess of 120fps at 1920x1080 using the Ultra quality setting. Feeling adventurous, we bumped the resolution up to 4K, which caused the frame rate to plummet to 30-40fps on average with a few dips below that level. The game was still playable, but not as enjoyable – we would settle at 2560x1440 as a happy medium.

Far Cry 4 is well suited to the capability level of this hardware. We also tried this game at various settings, and settled on 1920x1080 with the High quality preset. At this point, we logged a comfortable 76fps average using FRAPS. What’s interesting though is that examination of the frame pacing graph shows a highly irregular pattern, with a significant number exceeding the average frame time of 12.3ms. This wasn’t visible to the naked eye and is still within reason, with just a few outliers beyond the 33ms threshold.

Battlefield 4 did somewhat better, with an average of 57fps even at 4K using the High preset. Gameplay was smooth, and the average frame times were quite tightly packed around the 17.7ms average. If you stick to low-impact or older games, you’ll definitely have a much better time.

Verdict
There is an impressive amount of power on tap for a box this small, but Rs 73,599 is a lot more than today’s gaming consoles cost - and that’s before considering the money you’ll need to spend on RAM, SSDs, and an OS. The components we tested with push the price up to well over what a solid gaming laptop such as the MSI GP62 7RD Leopard Pro would cost. Even if you go with only a basic 240GB SATA SSD and a single 8GB stick of DDR4 RAM, you're spending at least Rs. 82,000 in total - plus you'll need a Windows license, monitor, keyboard, mouse, headset, etc. This well exceeds the cost of what we would consider a solid value-focused gaming desktop.

Because of this cost, we’re just a little unsatisfied. If you want to play current- or previous-gen games at full-HD and don’t plan on buying a 4K TV anytime soon, the EN1060 could work out. We would personally prefer something with a bit more room to grow as newer titles come out, and we don’t want to have to settle for the Low quality setting just a year down the line.

If we consider use cases beyond gaming, we can’t really slot the EN1060 into any single role. Its hardware is overkill for an HTPC or even a media server, and those are limited purposes for something this expensive. We’re more inclined to see this device as a compact PC for a desk, when space and looks both matter but an AIO won’t do because you want to be able to play games. If you’re really sure that the size and convenience of such a device are worth spending so much on, there’s nothing else like it which can deliver this much power. Just remember that if and when you feel that the CPU or GPU need to be upgraded, you’re going to have to replace the entire box.

We wish there were more small-form-factor PCs in the market. The EN1060 makes us feel like we aren’t getting enough bang for our buck, but at the same time, there aren’t many other choices, especially ones this small and convenient. Zotac is serving a very niche market here, and needs to figure out different balances of size, cost and power if it wants to make a dent in the mainstream.