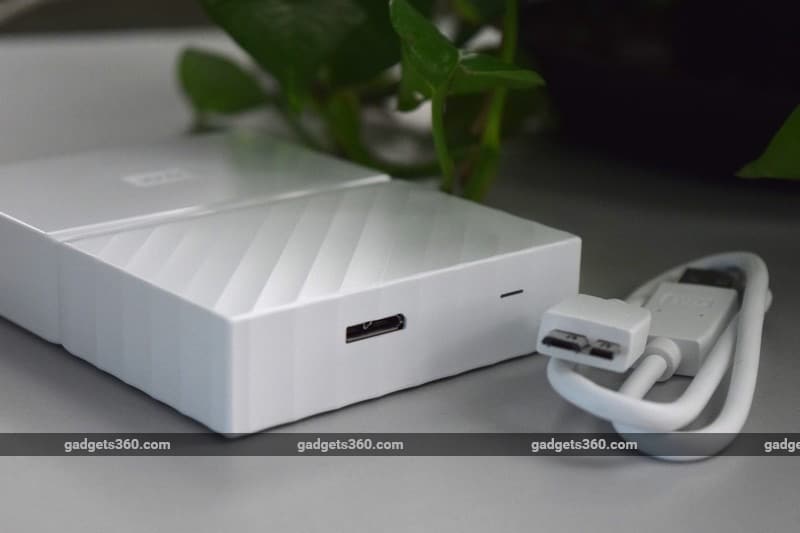 External hard drives have turned into commodity items, and lots of people are happy to buy whichever model is priced the lowest at any given point of time. Both two major brands, Seagate and WD, are positioned right up against each other with their offerings segmented into value, mainstream, and premium tiers. While premium hard drives aren’t necessarily faster or technologically better, they have some sort of premium design, or are super-slim, which sets them apart.

It is that latter category into which WD’s new My Passport series falls. These are redesigned versions of the very popular My Passport Ultra range, and are priced slightly higher. These drives look totally unique, but let’s see if that makes them worth paying more for.

WD My Passport look and feel
In India, WD has launched only four of the six colours that were shown off when the new My Passport range debuted internationally. We lose the most distinctive two, orange and yellow, leaving white, black, red ,and blue – the same as the existing My Passport Ultra range. We received a white unit for review.

The new design is like nothing WD has done before, and is a complete departure from the book-shaped units which inspired the original Passport names. Everything from the drives themselves to the new packaging was created by fuseproject, a design firm founded by the legendary Yves Behar. Each drive is visually segmented into halves, with the upper half totally plain and the lower half featuring a diagonal scalloped pattern. We were intrigued by the idea of all this, but while nice to look at, it doesn’t really do anything functional for the drive.

In fact, we’re not sure we prefer this design over the conventional My Passport look. For one thing, the edges and corners are sharp, which makes the new drive less comfortable in a pocket or hand. There’s also the fact that the plastic is extremely glossy, and our shiny white review unit picked up lint and smudges within minutes of being unpacked.

The new drives are under 1mm thicker than their predecessors, but other dimensions are unchanged. WD doesn’t publish the models’ weight but retail listings show that the new one is about 15g heavier. While that’s hardly noticeable, it’s mainly the lack of rounded edges that makes them feel bulkier.

The new My Passport drives use the common Micro-USB 3.0 connector, and while that isn’t a problem, this redesign could have been an opportunity to move to USB Type-C. The port and a white LED are on one side, and the other sides are all blank. Four tiny rubber feet keep the drive steady on a table, and while you can balance these units on their sides, we’d recommend against that, especially while in use.

WD My Passport features and performance
WD sells the new My Passport in 1TB, 2TB, 3TB, and 4TB flavours. All of them are preformatted in NTFS but can easily be reformatted if you’re using a Mac. You get a short USB 3.0 cable in the box, in the same colour as your drive. Specifications of the drive itself have not been published, but diagnostics showed our unit to be spinning at 5,400rpm. We measured read and write speeds using SiSoft SANDRA 2016, which showed 120.38MBps sequential reads and 87.66MBps sequential writes. Random read and write speeds are more accurate in reflecting how hard drives handle lots of small files, and those scores were 112.66MBps and a surprisingly high 142.17MBps respectively.

We tested the WD My Passport on our standard test bench with the following components:

WD My Passport software
The emphasis is on software, and WD ships three Windows tools on the drive itself. WD Drive Utilities lets you do a quick SMART status check as well as run diagnostic tests. You can choose to scan only for simple problems or check each individual sector – which on a drive this size, would take several hours. The tool also lets you erase the contents of your drive, though the documentation doesn’t make it clear whether data is scrubbed and overwritten securely. Finally, you can disable your My Passport’s LED and choose how long it should wait before spinning down to save power. For some reason, you can’t toggle encryption or change the drive’s name from this tool.

That’s where WD Security comes in. This is a separate program that lets you set up the drive’s 256-bit hardware encryption feature. You have to specify a password, but can also tell the software to recognise that it’s plugged into the same PC using the same Windows user account you set it up with, and decrypt itself automatically. There’s a warning that there is no way to recover a password if you forget it, and that encryption doesn’t prevent the drive from being reformatted – you might lose your data, but at least you can take steps to prevent it from falling into the wrong hands.

Your drive will be locked automatically when you eject it or shut down your PC with it still connected. Interestingly, you don’t have to install the WD Security program on every PC you use the drive with. When encrypted, a small, unencrypted virtual CD drive is created and appears in Windows Explorer as a separate drive. On it, you’ll find an executable called WD Drive Unlock, which does exactly what its name suggests. If anyone enters the wrong password five times, they’ll be prompted to eject it or erase it. That means your data will be destroyed, which again keeps it private, if not safe.

WD Backup is a very basic folder synchronisation tool. It lets you specify folders on your PC to back up. The scheduler has only three options: hourly, daily, and monthly. The tool can also sync to or from a Dropbox account.

Verdict
Hard drives sell for well below their official MRPs in India, and the new WD My Passport series is no exception. For example, 1TB units are selling for around Rs. 4,500 in the market as opposed to their sticker price of Rs. 7,980. However, the older models are still available for a few hundred rupees less. What it all comes down to is the design. If you like the look of these new drives, then by all means, go ahead and pick one up. If value is more important, choose whichever you can find for the lower price, because you won’t lose anything by buying one of the older models instead.