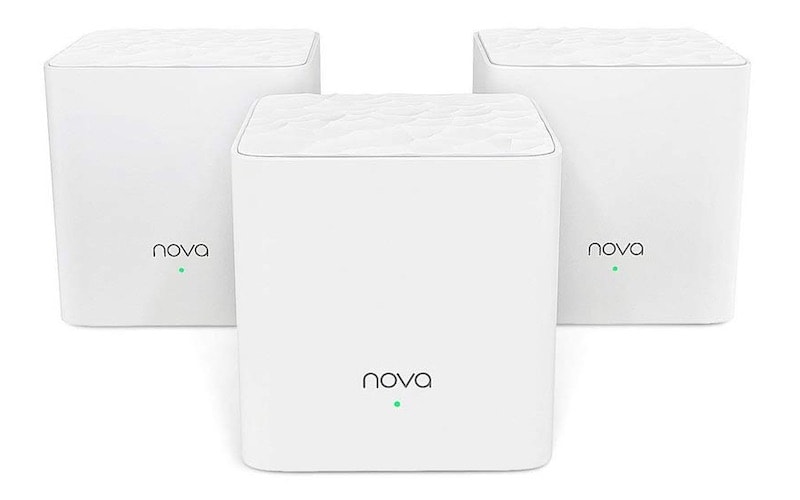 Founded in 1999, Chinese company Tenda Technology may not have the same brand recognition in India that the likes of Netgear and D-link enjoy, but it's been working hard to change that. The company has been active in the Indian market for a few years now and some of its budget routers find themselves on the best selling list on Amazon.

Tenda recently introduced its Nova range of mesh Wi-Fi routers in India. Mesh Wi-Fi router systems are getting increasingly popular as the number of devices in an average household goes up, underscoring the need to have good wireless coverage everywhere. The days when only one “main” PC was connected to the Internet are well and truly gone, and the focus is now on ensuring seamless Wi-Fi coverage throughout the house.

This is where mesh Wi-Fi router systems, consisting of two or more nodes that work in tandem, come in. They are ideal for blanketing large areas with Wi-Fi signal. As is often the case with new technological solutions, mesh routers started as expensive products such as the Netgear Orbi though recent months have seen the launch of more affordable systems such as the D-Link Covr-C1203 that we reviewed recently.

Today, we have in for review the Tenda Nova MW3, a mesh Wi-Fi router system that starts at around Rs. 8,000 for a pack with two nodes. So is this the budget mesh Wi-Fi system you've been waiting for? Let's find out.

The Tenda Nova MW3 Wi-Fi system consists of two (or three, depending upon the pack you buy) little cubes that form the backbone of your Wi-Fi network. There's not much in the retail package apart from the nodes, their respective power adapters, a quick install guide, and an Ethernet cable.

The nodes themselves are rather small (90mm x 90mm x 90mm), and can easily be hidden away. They are extremely light and feel rather empty and hollow, and the overall build quality doesn't inspire a lot of confidence. With that said, routers are devices that are meant to be put in one place and forgotten about, so this isn't really an issue, but just something that struck us as odd. White is the only colour option available.

All nodes are identical, which means there's no concept of main and extender nodes, as we've seen in other mesh Wi-Fi systems that we've tested. Each node has one LAN port and a LAN/ WAN port, and you connect your modem to the LAN/ WAN port on any one of the nodes to have the Internet connection shared across the network.

Unfortunately, both Ethernet ports max out at 100Mbps, which makes the Nova MW3 a non-starter if you have an Internet connection that's faster than 100Mbps. It's true that most broadband connections in the country are nowhere near that speed, but on the flip side, ISPs across the country are now offering faster plans, which means this router system isn't exactly future-proof. If you are someone with a desktop PC or a NAS, and you rely on Ethernet for fast file transfers within the network, this router system isn't for you either.

Thankfully, wireless connectivity is faster (at least on paper), with claimed maximum speeds of up to 867Mbps using the 5GHz band and 300Mbps on the 2.4GHz frequencies, with dual band support.

Setting up the Tenda Nova MW3 is pretty straightforward, though you will need a smartphone. That's right, to start using the router — and even manage it as and when necessary — you will need to download and use the Tenda WiFi app for iOS or Android as there's no Web-based interface. This didn't bother us much, but it's something that's worth noting for sure.

The router automatically detected our Internet connection type (as we would expect from any modern router), and guided us through setting up the additional nodes. The next step was to place the additional nodes across our home, with each node having an advertised coverage area of about 1000 sq. ft.

Initially, we placed all three units across our 1750 sq. ft. duplex apartment, but later we also tested with just one unit on each floor (i.e. two in total) and there was no drop in range or performance, which suggested they live up to their claim, at least as far as the range is concerned.

The Tenda Nova MW3 mesh Wi-Fi system has most features you would expect in a home router including guest network support, port forwarding, UPnP, QoS to prioritise certain types of Internet traffic, and more. You log in to the app to be greeted by an overview of the network, showing you the state of each node, and the overall upload/ download Internet bandwidth being used right now, as well as the number of connected devices.

The app lets you give a name (like living room, bed room etc.) to each node to help you identify them, and you can turn the status LED on each node on or off if they bother you, though they weren't bright enough to be bothersome in our experience.

With the app, you can see the name of each device that's connected to the network at the time, how long it's been online, and other details like its IP and MAC addresses. You can club your devices into “groups” and define periods when these devices can and cannot access the Internet, or block Internet access for an entire group with just one tap. Tenda says this feature can be used for controlling the Internet access of your kids' devices, for example.

You don't need to create a Tenda account to manage the router, which is a bit of relief in an age where every company wants your personal information. You will, however, need to sign in to the router if you want to be able to manage it remotely i.e. when you are not on the home network. Strangely, the router is set to reboot itself at 3am every day by default, but you can change that via the app. Software updates can be managed via the app as well.

As we stated earlier, the Tenda Nova MW3 does a good job of actually making sure each and every corner of your house has a Wi-Fi signal. However, the actual performance isn't great. With our laptop connected to the “main” node (the one with the Internet cable plugged in), we recorded Internet speeds of 95Mbps on our line, but this dropped to anywhere between 36Mbps and 45Mbps when we were connected to the “secondary” nodes. As a comparison, we recorded speeds of 110Mbps (using fast.com) throughout the apartment when using the D-Link Covr-C1203 and the Netgear Orbi.

Our experience transferring large files across the network was pretty similar. With two computers placed right next to the “main” node in both cases, we could transfer 1.87GB of data in 3 minutes while using the Tenda Nova MW3, while the Orbi allowed transfer of 3.94GB data in the same time.

As we noted before, the Ethernet ports on the Nova max out at 100Mbps, so it was no surprise then that the gap between the Orbi and Nova was even wider when we tested transferring data between a wired and a wireless computer. The Nova clocked 1.92GB in 3 minutes, while the Orbi, which has Gigabit Ethernet ports, allowed the transfer of 7.88GB in the same time. In other words, using the Ethernet ports on the Tenda Nova MW3 offers no real advantage over Wi-Fi in terms of performance.

Verdict
The Tenda Nova MW3 is priced at around Rs. 8,000 for the pack with two units and Rs. 11,150 for the three-pack, which makes it a relatively affordable entry point into the world of mesh networking. With that said, some of the decisions made in a bid to keep the costs down hold us back from whole-heartedly recommending the product.

While the range is excellent and the feature-set is decent, the overall performance is not good enough. What's worse, with the WAN ports capped at 100Mbps, it's not future-proof at all, not that you'd come close to anywhere near full speed over Wi-Fi, based on our experience with the system. If you are in the market for a mesh Wi-Fi system on a budget, we recommend you spend a little bit more and get the D-Link Covr-C1203 instead.