The perfect device for your small business. 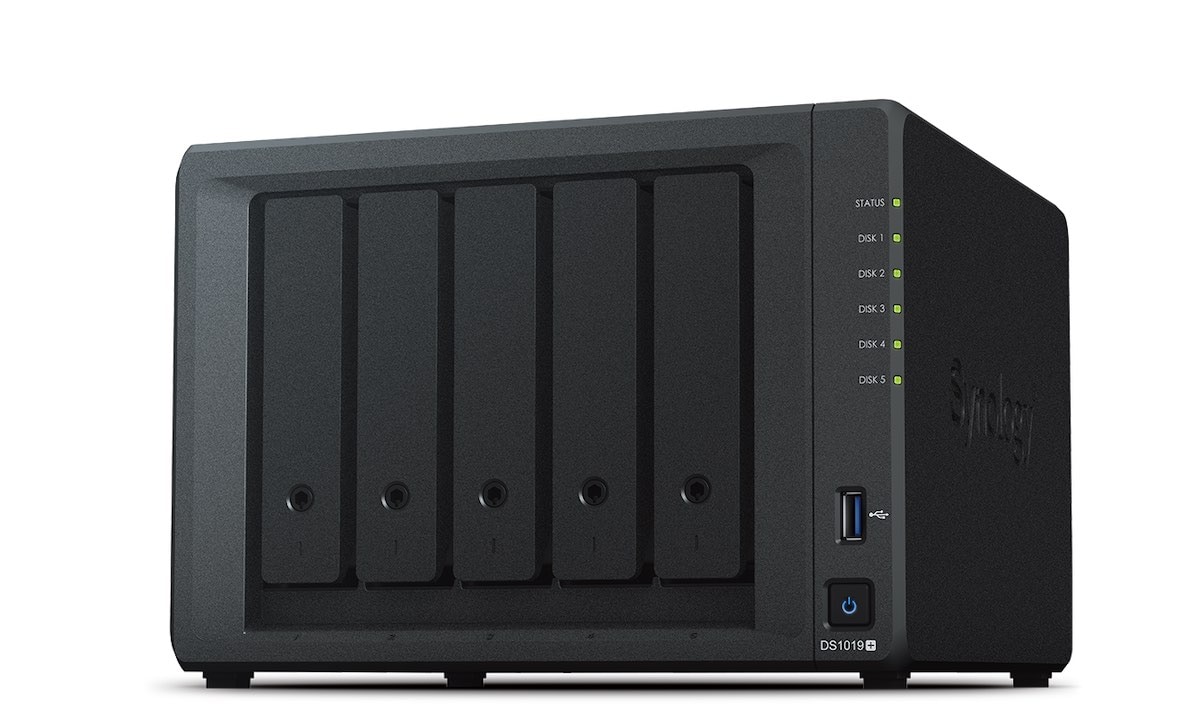 Network Attached Storage or NAS devices have evolved from being plain data storage boxes to special-purpose computers that come in many shapes and sizes. From basic, two- (and even one-bay) devices targeted at home users, to multi-bay devices with specifications that can rival some enterprise servers, NAS devices serve various functions and are available at various price points.

The DiskStation DS1019+ is a five-bay NAS that Synology says is targeted at “small offices and IT enthusiasts”, and a quick look at its specifications shows it's by far the most powerful NAS that we've come across till date. The DS1019+ is powered by an Intel Celeron J3455 processor, a 64-bit desktop class chip that was launched nearly three years ago. The J3455 is a quad-core processor with a base clock speed of 1.5GHz and a burst speed of 2.3GHz, backed by 2MB of cache memory.

The DiskStation DS1019+ packs 8 GB of DDR3L RAM, a big step up from the 2GB RAM in the likes of the DiskStation DS716+II and DiskStation DS218+ that we've reviewed previously. This makes the DS1019+ ideal for virtualisation needs, an aspect we will look at it in detail later in this review.

Physically, the DS1019+ looks a lot like the DS716+II, except that it's obviously larger due to the greater number of bays. The front is dominated by the drive bays, with the various status indicator LEDs on the right. There's a USB 3.0 port to plug in external drives and peripherals right above the power button.

Two large fans dominate the back of the Synology DS1019+, with two Gigabit Ethernet ports right below them. While we appreciate the redundancy on offer, we would've liked to see 10GbE ports at this price point. An additional USB 3.0 port, an eSATA port, and a Kensington security slot are also present at the back of the unit.

Perhaps the most interesting hardware feature of the DS1019+ is the presence of two M.2 NVMe SSD slots located on the bottom. You can put a M.2 NVMe SSD in one or both of these slots and enable a SSD cache to improve I/O speeds. Synology has published a whitepaper detailing how this technology works and the kinds of gains you can expect. Though most M.2 NVMe SSDs should work, the company has also published a list of models that it recommends for use.

The Synology DiskStation DS1019+ has two M.2 NVMe SSD slots that can be used to setup a cache

Unfortunately, it seems as though these NVMe SSDs can only be used as a cache, and not as drives themselves (which would make the DS1019+ effectively a seven-bay NAS). With SSDs becoming more affordable by the day, we hope this is a limitation that Synology can remove via a future software update. Of course you can insert 2.5-inch SATA SSDs in any of the five bays of the DS1019+ even today, but it would be nice to be able to use the faster M.2 NVMe slot sometime in the future.

Hardware specifications aside, what makes Synology systems special is the Disk Station Manager (DSM) software that takes away most of the complexity required in dealing with a NAS. In the past, we've spoken at length about the Package Center, which is sort of an app store for your NAS, and makes adding features to it as simple as pressing a few buttons.

We've also reviewed in depth Synology's suite of media management apps, which make running your own photo or video servers a breeze. The switch to streaming services such as Prime Video and Netflix means we don't watch local media as much as we used to, but on the odd occasion that we do, Synology's DS Video is still our go-to app on both mobile devices as well as the Apple TV.

Talking about video streaming, the DS1019+ is capable of transcoding two channels of H.264/H.265 4K video at the same time, which should satisfy even the most demanding of users. Like before, you can have dozens of simultaneous streams of videos that don't need to be transcoded i.e. converted to a different format while streaming. If Video Station doesn't do it for you, installing popular streaming server Plex is as simple as a couple of clicks, and you can even make your library accessible from anywhere in the world without too much effort.

Shifting gears, we've also covered in the past how Synology's MailPlus Server and Drive offer self-hosted alternatives to services that the likes of Microsoft, Google, and Dropbox offer, as well as their relative strengths and weaknesses. So, for this review, we decided to focus on a few other aspects of the Synology suite of products that we haven't covered before.

Let's start with Active Backup, a full-fledged backup solution that lets you take control of backups in your organisation. Using this package, you can have Windows, Linux, and Mac machines on your network, as well as servers and other storage locations, back up to your Synology NAS.

Backing up a Windows machine to your NAS, for example, is pretty simple. You just need to install the Active Backup for Business client on your Windows machine and point it to your Synology NAS on the network. Each backup task has a template associated with it that lets you define the schedule of the backup as well as the retention policy for old backups.

This template resides on your NAS, which means you can implement policy changes such as increasing or decreasing the retention period and/ or changing the backup frequency with a couple of clicks, and have it instantly reflect across the entire organisation.

For our tests, we ran Active Backup for Business on a couple of Windows clients, including a Virtual Machine running Windows on the Synology device itself. We also set up Active Backup to back up select folders on a Mac by setting it up as File Server within the package. Backups can be of different kinds — Incremental, Mirrored, or Multi-Version.

We had all the machines run their backups on different schedules and they ran without any issues during our test period consisting of several weeks. The best part is that everything ran automatically, without any manual intervention, which is one of the key parts of any successful backup strategy.

The Active Backup for Business package dashboard gives an excellent overview of the backup status of all devices configured to use Active Backup, including the Last Backup Time, which can be an excellent way to identify potential issues with machines. You can check the Activities tab in the Active Backup for Business package to get a log of various backup related activities. You can even have the NAS unit email you periodic reports summarising the backup activities for the time period.

Restoring data is pretty straightforward as well. On Windows, for example, you need to open the Active Backup for Business app and click on the Restore Portal button. This will present you with a Web-based view complete with the directory structure of your machine, which can be used to restore files as necessary. Old files — and even old versions of existing files — will be available based on the retention policy of your backup task.

Admins can see all backups via the Active Backup for Business package on the Synology NAS, which provides a nice user interface that lets you quickly jump from one machine (backup task) to the other, as well as see different backup snapshots in time thanks to a timeline view at the bottom.

Active Backup for Business also makes it easy for you to restore data to physical media. You can also connect your VMware vSphere with your Synology NAS and simplify the task of backing up and restoring your virtual machines.

Next up is a package called Hyper Backup that can be used to create a backup of the data on your Synology NAS itself. You can use it to schedule periodic copying of data from one volume on the NAS to another, or backing up the entire (or selected) contents of the NAS to the cloud or an external volume. There's support for client-side encryption and compressed backups as well.

Hyper Backup supports backing up to popular cloud services such as Amazon Drive, Google Drive, Dropbox, AWS S3, Microsoft Azure, and others. You can also use rsync to copy data to other file servers. For our tests, we subscribed to a trial of Synology's own C2 cloud backup service.

We configured our NAS unit to automatically back up to Synology C2 at 8pm every day, and the process worked as expected throughout the length of our trial. Synology C2 plans start at EUR 9.99 per year for 100GB of storage and support daily backups. 1TB cloud storage plan with support for hourly backups and data deduplication as well as client-side version control is priced at EUR 6.99 per month (or EUR 69.99 when billed annually).

We mentioned earlier that Active Backup for Business lets you back up your VMware vSphere virtual machines to your NAS, but a powerful NAS like the DiskStation DS1019+ can go a step further and let you use the NAS itself for your virtualisation needs. You can install Windows, Linux, or even run a virtual instance of Synology's own DSM on it.

Thanks to the generous amount of memory on the DiskStation DS1019+, we could allocate 4GB of RAM to this virtual machine and still have enough left over for everyday tasks. Setting up the virtual machine and installing Windows on it was as simple as performing a few clicks, and in no time at all we had a Windows machine to fall back upon in a network largely full of Macs.

Virtual Machine Manager even provides a Web-based interface that gives you a full-fledged desktop for your virtual machine within a browser window, though you can obviously also install a VNC server on your virtual machine and access it via a native VNC client on any platform.

Look Ma, a Windows desktop inside my Mac's browser!

Virtual Machine Manager also provides a host of advanced features such as Cluster Management, Snapshot Retention, Remote Replication, and more, though some features might require you to purchase a Synology VMM Pro license. Clusters can be spread out across up to 7 Synology NAS units, letting you create an extremely powerful virtual machine with support for features like load balancing.

Verdict
Available via Amazon in India, the DiskStation DS1019+ is priced at Rs. 71,330. The hard drives you use it with will of course be an additional expense.That makes it one of the more expensive offerings in Synology's portfolio, but it's easily one of the most versatile and powerful NAS products out there.

Throw in Synology's DSM software and the wide variety of packages out there, and you have the hardware and software capabilities to have your in-house Office 365/ G Suite clone up and running with a few clicks.