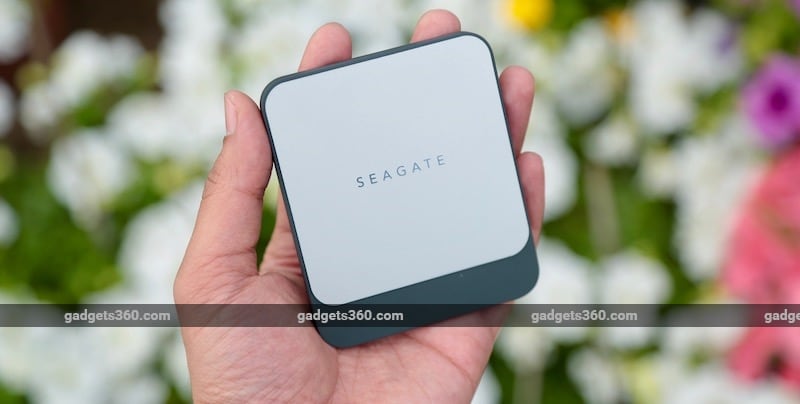 SSDs, or solid state drives, offer a substantial performance advantage over spinning drives, but it's the price that has kept them out of the reach of the average consumer. That's changed in the last couple of years, at least as far as internal SSDs are concerned, and prices have gone down to the point that at least a low-capacity SSD is now within the reach of most consumers building or buying a PC.

External SSDs still continue to be relatively expensive, though things are definitely looking better than they did at this time last year, when we reviewed the Samsung T5. The 500GB Samsung T5 SSD now retails for under Rs. 10,000, as opposed to Rs. 16,500 in February last year. In fact, twelve months ago, the 250GB Samsung T5 was retailing at Rs. 9,999, so you are now getting double the capacity at the same price.

Sure, that's not exactly pocket change, and 500GB isn't enough to store large media libraries, but premium drives such as the Samsung T5 at least offer performance that makes them worthy alternatives in scenarios where it's not possible to use an internal SSD. Whether you want to run an alternate OS from an external drive without sacrificing performance, or are a media professional who wants to store large files without compromising on transfer speeds, external SSDs have enough use cases.

Seagate is a veteran of the storage space but it took until 2018 for the company to release its first portable SSD. With an unimaginative name that does cut to the heart of the matter, the ‘Seagate Fast SSD' aims to take on the Samsung T5 at the top of the pile. Let's find out if Seagate's first portable SSD lives up to its name.

Rather than the rectangular bodies of the Samsung T5 and most other drives out there, Seagate has opted for a design that's very nearly a square. At 94x79x9mm, it isn't as pocketable as the Samsung T5, and it's nearly 60 percent heavier as well, though at 82g, it's still extremely light. It's 1.5mm thinner than Samsung's drive, which isn't a lot in the grand scheme of things, but it's certainly something you'll notice in side-by-side comparisons.

Seagate says the Fast SSD has a "shock resistant" body, and though it's hard to test that claim, it certainly feels pretty sturdy. The body is largely made out of plastic with a metallic plate up on top of it up front, giving it a two-tone finish. The USB Type-C port and a status LED are present at the bottom.

The Seagate Fast SSD is rated to support sequential read and write speeds of 540MBps and 500MBps respectively over a USB 3.0 connection, claims that we will test shortly. The drive is available in India in 250GB, 500GB, and 1TB capacities.

In the box, apart from the drive, you get a USB Type-C to Type-C cable as well as a Type-C to Type-A cable, a Quick Start guide, and a voucher that you can redeem to get a complimentary 2-month membership to Adobe's Creative Cloud Photography Plan, which is a nice bonus. The drive comes preloaded with Seagate's Toolkit backup and mirroring software.

Talking about the bundled software, we used the macOS version of the software, which is designed to keep a folder on your Seagate drive in sync with a folder on your computer's local drive. Once you've set it up, any additions/ deletions/ edits made to files in either of those folders are automatically reflected on the other. In our testing, this worked as advertised. The Windows version of the software also doubles up as a backup solution, which will have a much wider appeal.

Like most modern drives, the Seagate Fast SSD is formatted as exFAT out of the box, which means it will be fully compatible with both Windows and macOS. You get 232GB of available storage on the 250GB drive.

In terms of performance, we noted sequential read and write speeds of 564.5Mbps and 301.9Mbps with the Seagate Fast SSD using CrystalDiskMark, with the latter a disappointment compared to the rated speeds. As a comparison, the Samsung T5 clocked 550.9Mbps and 505.8Mbps respectively, when connected to the same machine.

When it comes to random reads and writes, the story was similar, though the gap wasn't as wide when it came to write speeds. With the queue depth set to 32 in CrystalDiskMark, the Seagate Fast SSD recorded random read and write speeds of 176.1Mbps and 155Mbps respectively, as opposed to 180.8Mbps and 175.4Mbps for the same setup with the Samsung T5.

Verdict
The Seagate Fast SSD 250GB is available via Amazon at Rs. 6,999, which makes it an extremely attractive option. In the past, we've seen the Samsung SSD T5 250GB model retail at the same price, but right now it's going for a little over Rs. 9,000 (though this might change again by the time you read this).

The 500GB models of both drives are retailing at roughly the same prices — Rs. 9,799 for the Samsung T5 and Rs. 9,699 for the Seagate Fast SSD, which makes the Samsung T5 an obvious pick, given its clear performance advantage. If there's a significant price difference between these two drives, however, as there is right now with the 250GB models, the Seagate Fast SSD is worth considering.

The random write speeds show that the Seagate Fast SSD isn't very far behind the Samsung T5 in terms of performance. It also lacks hardware encryption support, which might bother some people. With that said, its pricing is great, and that makes it a worthy alternative to the Samsung SSD T5 for those on tight budgets.