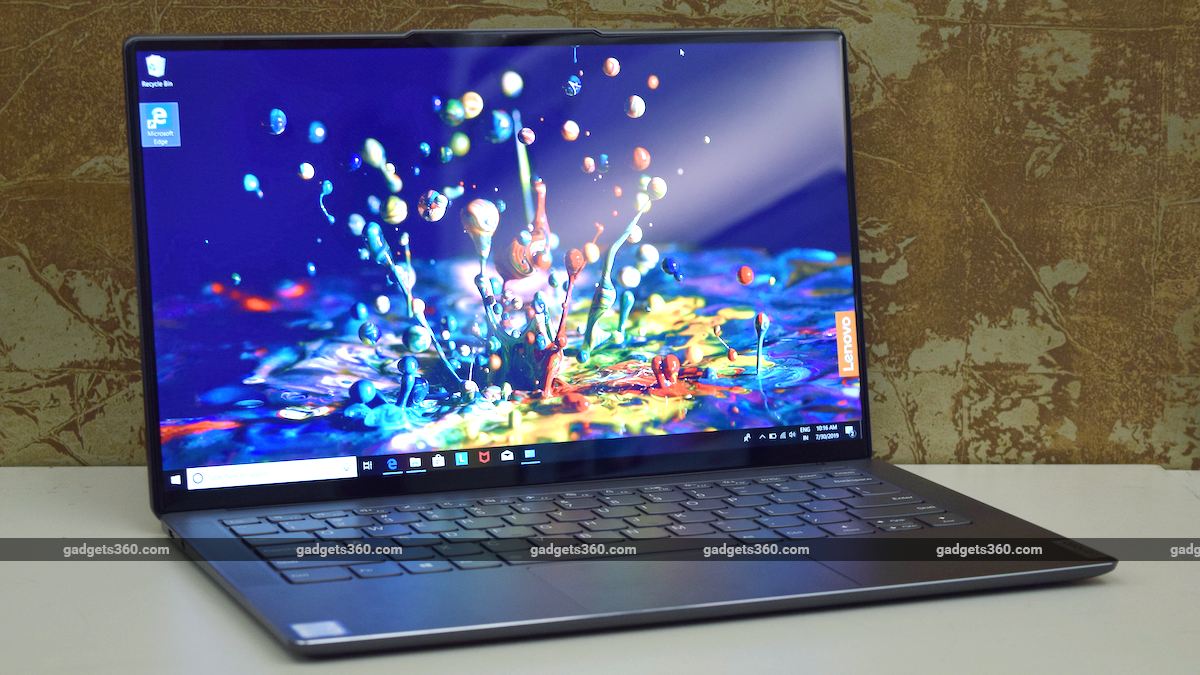 Lenovo likes experimenting with high-end design, and we've seen lots of premium materials and some interesting innovations in flagship 9-series ultraportables such as the Yoga 3 Pro with its watch-strap hinge and the Yoga 920 Vibes Edition with its patterned glass lid. The latest entrant in this series is the Yoga S940, which is a more compact take on thin-and-light laptops. The Lenovo Yoga S940 weighs just 1.2kg, has plenty of design flair, and also boasts of quite a few intriguing AI-enabled software features. Lenovo will be hoping to take on Dell's popular XPS 13 series, HP's luxe Spectre models, and even the new MacBook Air in the premium ultraportable market. Here are our first impressions of the new Lenovo Yoga S940.

First of all, the Yoga S940 is not a 2-in-1 convertible, which makes us wonder why the company has used its Yoga sub-brand. It's also worth noting that exactly the same device is sold as the IdeaPad S940 in some countries such as the USA. It was first shown off at the CES trade show in January this year and has only just made its way to India.

This laptop arrived in what looked like a deceptively small gift box, although the charger was packed separately. That aside, what we have is a very stylish laptop that measures just 12.2mm thick at its thinnest point. The lid, sides, and keyboard deck are made of aluminium and have a dark sandblasted finish, which Lenovo calls Iron Grey.

The exterior of the Yoga S940 is plain and understated

The whole design is quite minimalist but even if it doesn't look like much at first, this device feels great in the hand. There's nothing to see other than the Yoga logo on the lid. There are only two Thunderbolt 3 Type-C ports on the right, and another USB 3.1 Gen1 Type-C port plus a 3.5mm audio socket on the left.

You can raise the lid with a single finger, but this laptop is so light that it slid around on our table when we did so. Once open, you'll see one of the Yoga S940's signature design features – curved-edge glass on the screen that slightly wraps around the inner sides of the lid, much like we're now used to seeing on premium smartphones.

The screen is very glossy and reflections are unavoidable, but it's also pretty high-quality. In our short time with the Yoga S940, we found it a pleasure to work with. Lenovo sent us a unit with a full-HD resolution, but you can choose a 4K panel instead using Lenovo's new online configuration tool.

The keyboard keys are relatively shallow and the whole thing flexes a little in the middle and the arrow keys are squashed together. We found typing to be relatively easy, but we had to adjust our posture because there isn't much room for wrists to rest on. We liked the wide trackpad though.

The keyboard and trackpad are comfortable for the most part

There are two speakers to the sides of the keyboard and two more on the bottom on the unit. Sound is surprisingly loud and feels wide and open, though there isn't a lot of bass, and distortion is a problem above the 50 percent volume level.

Lenovo's base configuration for the Yoga S940 in India features an Intel Core i5-8265U CPU, 8GB of LPDDR3 RAM, a 256GB NVMe SSD, full-HD screen, and Windows 10 Home. The starting price on Lenovo's website is Rs. 1,25,133 including taxes. The RAM is soldered down making upgrades impossible, but the SSD appears to be a standard M.2 module.

Other specs that can't be configured include an HD webcam with Infrared, a 52Wh battery, Wi-Fi 802.11ac, and Bluetooth 4.1. Battery life is claimed to be up to 15 hours with a full-HD panel but only up to 7.5 hours with the 4K option, which you should definitely keep in mind when deciding between them. We didn't have time to test the Yoga S940's battery life ourselves, but stay tuned for a full review.

The AI features that Lenovo talks about aren't evident unless you go looking for them. The Yoga S940 offers several neat tricks including face recognition to sign in, and eye-tracking Glance software that can blur your background in video chats and darken the screen when you're looking away to protect your privacy (like we saw with the Lenovo ThinkPad X1 Extreme earlier this year). We look forward to testing these capabilities in our more detailed review, coming up soon.

The Lenovo Yoga S940 feels like a compelling package with great specifications at a reasonable price. The only issue we have at the outset is how long Lenovo has taken following its January global launch to bring it to India – we already know that this model will be updated with Intel's upcoming 10th Gen 10nm ‘Ice Lake' CPUs before the end of this year, under the Project Athena initiative. We can expect significantly better performance, responsiveness, and battery life when that happens at some point in the next few months.

Our full review of the Lenovo Yoga S940, in which we'll test its performance, battery life, ease of use, and AI features thoroughly, is coming up soon.

Redmi 7A Next Sale at 8pm Today via Flipkart : Price, Specifications, Sale Offer
Dyson’s New Products Want a Place in Your Home for Years to Come