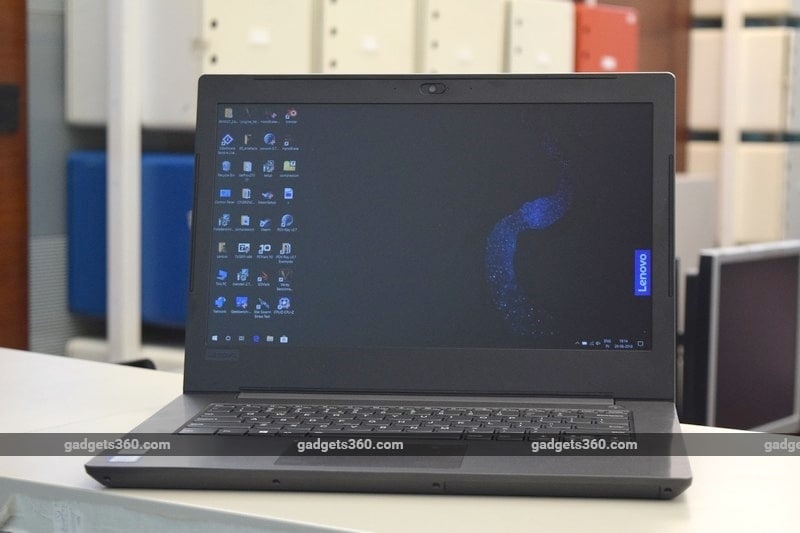 We've often felt that Lenovo is missing out on a huge market by not selling its professional ThinkPad laptops more widely in India and at more reasonable prices. While many models are available in retail, offices that buy in bulk get better prices and more choices when it comes to features and specifications. That ignores a huge number of potential buyers - students, freelancers, startups, the BYOD crowd, and even just ordinary home users who prioritise productivity over style or entertainment.

Lenovo is trying to fill this very gap with its new V series - the V is for victory. This is a product line designed especially to appeal to small businesses, but the company still wants to keep one foot in the retail market. As such, while these laptops will still be offered to business clients buying in bulk, a large number of V series laptop SKUs are listed on Lenovo's website and will be available in physical stores.

The Lenovo V330 is specifically aimed at users who need a portable, reliable, no-nonsense business laptop. It's meant to deliver corporate management features as well as modern specifications and convenience. We've spent quite some time with the V330, and we've discovered a number of little touches that set it apart from mainstream laptops. Could this be the low-cost ThinkPad we've always wanted? Read on to find out.

The V330 looks and feels a lot more like Lenovo's consumer Ideapad offerings than the premium ThinkPad line. The V330 is very plasticky and every surface looks like an ocean of grey. The design is completely devoid of flair, almost to the point of being boring, which isn't necessarily a bad thing for corporate environments. There's a brushed metal plate on the lid that looks relatively modern from a distance, and the same finish on the keyboard deck. Unfortunately, both pick up smudges very easily.

Lenovo greatly overstates the "contemporary style" and "sharp-looking face" of the V330 in its promotional material online. For example, the claim of "narrow bezels" is laughable in this day and age. The blank area around the screen measures roughly 1.5cm on the sides, 2cm on the top, and 3cm on the bottom, with prominent rubber spacers all around. Again, there's nothing wrong with this, so we don't understand why Lenovo needed to try and oversell this laptop's design.

The keyboard layout is identical to what we've seen on several Ideapad models including the current-gen Ideapad 330S. If you were hoping for something like Lenovo's legendary ThinkPad keyboard, you're out of luck. The layout is okay, but we found the bottom row a little difficult to use thanks to a very pronounced rim on the key tray.

There are however a few bonuses that you don't get with mainstream Ideapad models. One is the physical sliding cover over the 720p webcam, and of course keyboard backlighting is always appreciated. There are also more ports than usual around the sides - you get a pair of Type-A and Type-C USB ports (USB 3.0 speed) on either side, and one of the Type-C ports supports USB power delivery as well as DisplayPort video output. There's also a VGA port and an HDMI video out, Gigabit Ethernet, an SD card slot, and a 3.5mm audio combo socket. Sadly, you can't change this laptop through its Type-C ports.

There's a big surprise on the bottom as well. What looks at first like a removable battery is actually a docking bay for Lenovo's Ultrabay accessories. Ultrabay used to be the name for a succession of modular accessory standards on ThinkPad laptops, but Lenovo discontinued it several years ago. You used to be able to give your ThinkPad an extra battery; optical, floppy or even a Zip drive; or various legacy port adapters. This new Ultrabay concept is not as versatile, the only thing you can add to the V330 is an extra battery. This allows Lenovo to keep the weight of the V330 low, at 1.8kg - that will go up to around 2kg with the battery inserted. It's also a compromise between having a sealed-in battery and an easily replaceable one.

Unfortunately the Ultrabay is not standard, and is incompatible not only with previous-generation hardware, but also between current models. Lenovo's website says that the V330's Ultrabay can accommodate an optical drive, but it's physically too small. We reached out to the company and confirmed that this is a mistake, and that 15-inch V-series laptops use a larger Ultrabay standard.

Also interestingly, there's a USB 2.0 port on the inside of the Ultrabay cover. You could plug a small device in and it would be hidden and unobtrusive. We can't imagine many ways in which this would be useful other than maybe having a receiver for a wireless mouse. A 4G dongle will not fit. Lenovo told us that it's there as a value addition because many customers need more than two USB Type-A ports and don't want to deal with Type-C adapters. While awkward to use, it's better than nothing.

While not quite a ThinkPad, the V330 boasts of considerable physical durability. The lid's hinge extends to 180 degrees so that it can survive being knocked over. Lenovo says that the hinge as well as the keyboard, fans, and chassis have been tested extensively. There's protection against shock and vibrations, including a sensor that will park the hard drive heads if it detects a fall to help prevent data loss. Retail buyers get a one-year warranty.

Lenovo will allow corporate bulk buyers to configure this laptop to their specific requirements, but the configurations listed for retail sale should cover the bases for most people. Prices start at roughly Rs. 34,000 for a variant with an HD screen, 7th Gen Intel Core i3 CPU, 4GB of RAM, 1TB hard drive, and no OS license or software. Our review unit is the top-end variant, which costs just under Rs. 73,000.

This much money gets you a Core i7-8550U processor, which is a quad-core model based on Intel's 8th Gen Kaby Lake Refresh platform and uses Intel's integrated UHD Graphics 620 GPU. Our unit also had a 1TB hard drive and 8GB of RAM, of which 4GB was soldered onto the motherboard and 4GB was a standard upgradable module. This variant has a full-HD 1920x1080 pixel screen, and thankfully it's of the non-reflective type. This variant comes with Windows 10 Pro.

All configuration options share a few specifications. The 2-cell built-in battery has a rated capacity of 30WHr. Quick charging is supported with the included 45W adapter, though only when the laptop is not running. There's a fingerprint reader just below the keyboard for Windows Hello authentication. Corporate buyers will appreciate the Intel Trusted Platform Module for remote management and security. You also get Wi-Fi 802.11ac, Bluetooth 4.1, and stereo speakers.

Our review unit has a modern Core i7 processor but without an SSD we found that it often took a long time to boot and resume from standby, and we're used to better. There was occasional UI stutter. Other than that, apps ran smoothly and we were able to multitask heavily with loads of browser tabs open and a few other apps in the background, all without trouble. The Lenovo V330 didn't get too hot when playing 4K videos or running tests, though the left side of the keyboard did get a bit warm.

We were very happy working with the non-reflective screen, especially under harsh overhead office lights. Unfortunately, colours are a bit dull, so movies and games didn't look their best. The speakers are pretty loud and clear but there is a complete lack of bass, so don't expect music to sound great. If you want to balance work with entertainment, these are the factors to keep in mind.

When it comes to work though, we were also slightly let down with the keyboard and trackpad. The keys felt a bit too stiff, and the trackpad wasn't as responsive as we're used to. It took a while to get used to both, and other than the keyboard backlighting, it felt like we were using a basic budget laptop. We also didn't like the fact that there's no way to Fn-Lock the top row of keys so that they act as standard Function keys rather than system shortcuts. Clearly, Lenovo is reserving its best efforts for the ThinkPad family.

Benchmark tests showed pretty good performance for a laptop with these specifications. We got 3,063 points in PCMark 10, as well as 144 and 532 points respectively in CineBench R15's single- and multi-threaded tests. We compressed a 3.24GB folder of assorted files in 4 minutes, 36 seconds using 7zip, and converted a 1.3GB AVI file to H.265 in 2 minutes, 3 seconds. Gaming tests were predictably weak, with 3DMark's Time Spy and Fire Strike Extreme tests returning just 418 and 474 points respectively. We tried out Rise of the Tomb Raider at 1920x1080 using the Low preset, and got an unplayable average of 9.48fps.

Battery life wasn't great, which is most likely down to the compromise Lenovo made in order to accommodate an optional Ultrabay battery. We got through about 8 hours of casual Web surfing and document-related work before getting a low power warning. The intense Battery Eater Pro test ran for only 1 hour, 7 minutes before the entire battery was drained. We also tested Lenovo's quick charging claim. With the laptop in standby and the lid closed for 20 minutes, the V330 was able to charge up to 25 percent from zero. This is handy, but we would have liked to have been able to continue working and still charge quickly.

Verdict
Lenovo has identified a key market segment, and the V330 is a good effort to tap it. Consumer laptops often cut too many corners and expect users to make too many compromises, especially at the low end. With this model, Lenovo is acknowledging the existence of users outside of large corporations who just want to get work done.

However, we think that the company has cast its net a bit too wide, trying to address buyers across multiple price tiers with just one model. There's a massive difference in the expectations we have of laptops priced at Rs. 34,000 and those that cost Rs. 73,000. The competitive landscape is also going to be completely disparate. As such, it's important to underscore the fact that our ratings and comments apply specifically to the variant we have tested.

We believe that Lenovo might have considerable luck with the V330 at the lower end of its chosen price range. It offers all the specifications that people care about, and value adds in the form of lots of ports, the Ultrabay, and Lenovo's assurances of physical durability as well as security. The plain-Jane plastic body is also perfectly acceptable. However, for Rs. 73,000 we'd expect something thinner, lighter and more premium. We would need an SSD for sure, and we'd also love to have a more ThinkPad-style keyboard. At this price level, there are several slick metal-bodied options with powerful specifications to choose from, and Lenovo's corporate-friendly pitch isn't as appealing for retail buyers.

NASA's New Horizons Spots Kuiper Belt Object as Next Flyby Target From Over 160 Million Kilometres Away
Mr. Robot’s Season 4 Will Be Its Final Season, Coming 2019