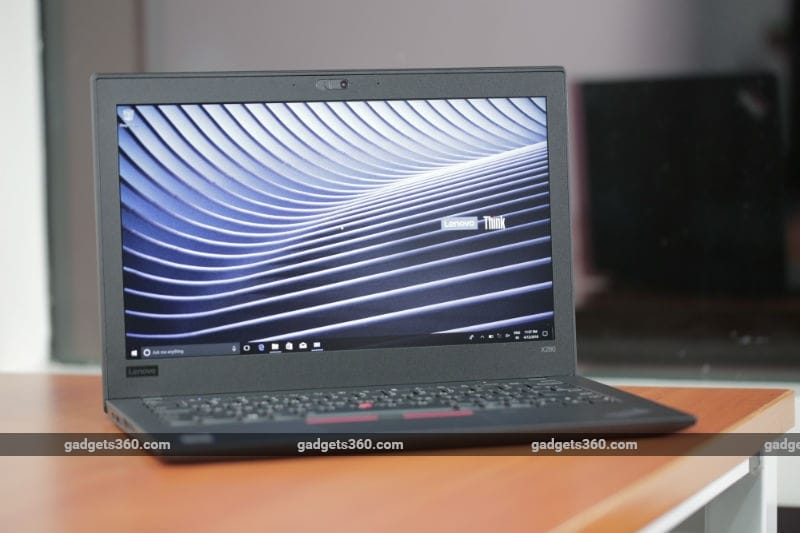 Lenovo has just unveiled a whole new line of ThinkPad business laptops in India, upgrading its offerings with 8th Gen Intel Core processors and other improvements. The range extends from the entry-level affordable L-series, to the mainstream T-series, the compact X-series, and the flagship thin-and-light X1 Carbon. Lenovo has injected a bit of flair into the otherwise staid ThinkPad family with a number of convertible 2-in-1 "Yoga" models at each level. One model that caught our eye is the brand new ThinkPad X280, which weighs just 1.1kg and has a 12.5-inch screen plus full-sized keyboard. It isn't too expensive, making it seem like a road warrior's potential dream machine. We were able to get our hands on a unit right after Lenovo's big India launch, and here are our first impressions.

The ThinkPad X280 is incredibly thin and light. It might seem like its most obvious competitor is the 12-inch Apple MacBook, but the two machines are designed with completely different goals in mind. Comparing the dimensions and specifications of the two, we think that a lot of people would prefer the ThinkPad X280 for two main reasons: it has an extremely comfortable keyboard, and it has a generous selection of full-sized ports.

The keyboard is obviously important to ThinkPads, and the layout is pretty much standard. There's a bright red TrackPoint in its usual spot between the G, H and B keys, with two physical buttons right below the spacebar. Not a lot of people will give this a try, but longtime ThinkPad loyalists still swear by it and would revolt if it was killed off. Similarly, the Fn key is where the Ctrl key usually is. Key travel is excellent, and it would be really easy to get used to typing on a machine like this.

On the sides of the device you'll find a USB 3.1 Gen 1 Type-C port which doubles as the power inlet for the bundled 65W charger. There's a second Type-C port, but this one is also a much faster Thunderbolt 3 port. Both Type-C ports support DisplayPort video output and there's also a full-sized HDMI 1.4 output, plus you get a VGA dongle in the box to support legacy projectors. Rounding out the sides are two full-sized USB 3.1 Gen 1 ports, and a 3.5mm combo audio socket. The only thing there isn't space for is an Ethernet socket, but Lenovo includes a proprietary dongle in the box.

There's no SD card slot, but there is a tray on the back for a Nano-SIM and a microSD card. It isn't convenient to use for quick file transfers because you need a pin to eject it, just like on a smartphone. According to Lenovo, cellular data connectivity requires additional certification, and so this functionality might only be offered to corporate buyers.

There's a fingerprint reader next to the trackpad which can be used to sign in to Windows. The only other interesting little touch is a physical shutter over the webcam, which could be extremely handy in security-conscious corporate environments, especially in this day and age.

The ThinkPad X280 has a matte-textured lid, and other than a few angular accents on the sides, the design is totally understated. The lower half and the outer lid feel reassuringly metallic, and the hinge feels rock-solid. The lid can be folded back 180 degrees which is great for comfort and flexibility. Lenovo also promises that this laptop is spill-proof and claims that it has passed over 200 durability tests. Unfortunately there's no access hatch on the bottom for easy upgrades.

The variant that we got our hands on has an 8th Gen Intel Core i5-8350U processor with Intel's vPro technology for corporate management. This is a quad-core model with HyperThreading, based on the 'Kaby Lake-R' architecture, and runs at between 1.7GHz and 3.6GHz. It also has 8GB of RAM and a 512GB NVMe Samsung SSD. The screen resolution is 1920x1080, which is comfortable with Windows 10 scaling it to 125 percent. There's a 48WHr battery and Lenovo claims that it can be charged up to 80 percent in one hour.

This price of this specific configuration would work out to Rs. 98,700, which is extremely steep. The base configuration will have a Core i3-8120 CPU, 4GB of RAM, a 1366x768-pixel screen resolution, and 256GB SSD, and will be priced at Rs. 63,180. Lenovo is already offering the ThinkPad X280 and the other recently launched models to corporates, and there are a wide range of configuration options to choose from.

The main attraction of the ThinkPad X280 is how thin and light it is, but there's also plenty of power under the hood - if your company is willing to pay for it. This laptop could be a road warrior's dream, though there's a huge premium on the sturdiness, corporate management features, and the promise of reliability that the ThinkPad brand implies.

We hope that Lenovo will make its ThinkPads easier for individuals to buy, especially this one, because there's nothing like it in the consumer market. The differences between the Apple MacBook and this machine once again come to mind. We've expressed our frustration at how companies (including Lenovo) often prioritise design over productivity with their consumer laptops. Lenovo has told us it is planning for retail availability aren't yet known, and it could be a few months before we have information such as what exact configurations will be offered.

When the ThinkPad X280 becomes widely available for retail purchase, we'll have a full review in which we'll check out its performance, ergonomics, battery life, and features in much greater detail. Of course, value for money will be a big part of our assessment, so stay tuned to Gadgets 360.