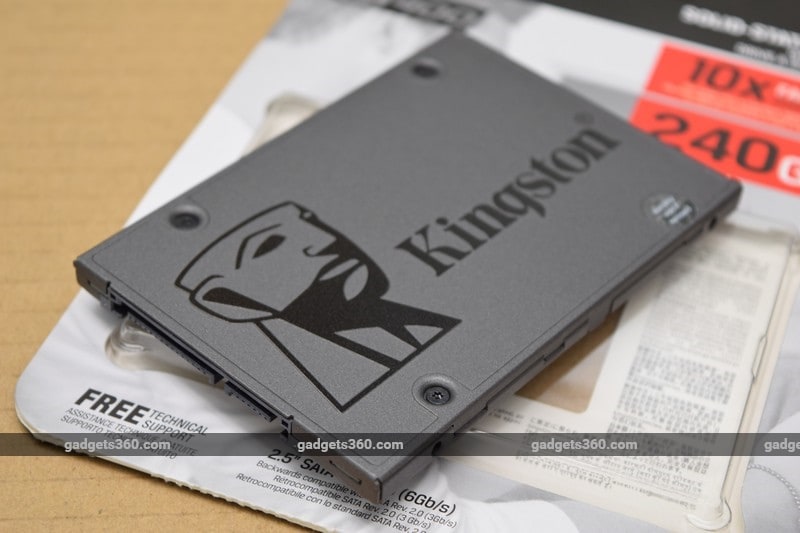 If you aren't using an SSD in your laptop or desktop PC in 2017, you're definitely missing out. There's very little reason not to insist on one, even if your budget is absolutely rock bottom. At the lower end of the market, 120 or 240GB of storage space is enough for casual users, and the speed benefits of an SSD outweigh the capacity advantage of a spinning hard drive. Your PC will boot and go to sleep quickly, programs launch without making you wait, and better responsiveness makes you more productive overall.

Kingston is one of several companies that offer reasonably capacious SSDs at the lowest possible prices. It competes with WD, Adata, Samsung, Zotac and Transcend in the Indian market, but interestingly, has a two-pronged strategy. There's the A400 series and the UV400 series, both of which have very similar specifications and cost pretty much the same, but do have some differences that we will get to later.

Today, we're going to test the Kingston A400 240GB model to see if it delivers on its promise, and what you can realistically expect from it.

Kingston A400 specifications and features

The Kingston A400 is a standard 2.5-inch SATA SSD, but you can tell it's aimed at the commodity market just by looking at it. For starters, it comes in the simplest packaging we've ever seen; a thin cardboard-and-plastic bubble pack. There's no padding, though to be fair SSDs are not very susceptible to damage while shipping. You don't get anything else with it - no SATA cable, no screws, and no adhesive shim. This is a little surprising because drives like this are usually aimed at the upgrade market, and a shim helps 7mm thick SSDs fit into spaces designed for 9.5mm thick hard drives, such as older laptops.

The drive itself is just a plastic box with Kingston's logo etched onto the surface itself. A small sticker on the back has the mandatory regulatory information. Of course looks don't matter for an internal SSD, but we're left with the impression that Kingston has cut every possible corner in order to force the price down.

TBW (Terabytes written) gives buyers an idea of the useful life they can expect from their purchase, and the figures are 40TB, 80TB, and 120TB respectively for the three capacities. Kingston also specifies 1 million hours as the MTBF (mean time between failures), which is way more than adequate for a consumer drive. You'll get a three year warranty with each drive.

One of the things that contributes to the A400's low price is that Kingston does not specify the exact controller it uses, and this is something that might change with future revisions. All that the spec sheet says is that a "2ch controller" is being used. This is the key difference between the A400 and UV400 - Kingston does specify that the latter uses a four-channel Marvell 88SS1074 controller here. The UV400 is also available in a 960GB capacity, with all capacities rated for slightly higher speed and TBW ratings than their A400 equivalents.

Without the advantage of the queue depth, sequential read and write speeds were 502.1Mbps and 490.6Mbps, whereas random speeds were 25.38Mbps and 86.67Mbps respectively. These are still great scores, and performance is way snappier than it would be with a spinning hard drive. SiSoft SANDRA's physical disk and file system tests gave us comparable results.

Overall, the scores are a bit lower than those we saw with the 250GB WD Blue SSD we tested a short while ago.

Verdict
We haven't tested Kingston's UV400 against the A400, but clearly there's meant to be a hierarchy here, even if the differences between the two are extremely minor. The interesting thing though is that street prices and the forces of supply and demand fluctuate so much that we can see UV400 drives selling for slightly less than their A400 counterparts at several online stores. If you're out shopping, it certainly pays to do a little homework.

Beyond Kingston's own lineup, there are some excellent choices from Samsung and WD to consider as well. The WD Blue 250GB performed better in standard benchmarks and gives you a higher formatted capacity, plus a neat software tool that shows drive health and lets you perform diagnostic checks. There's no equivalent to that with the Kingston drives.

In terms of pricing, the 240GB Kingston A400 has an MRP of Rs. 9,000 but sells for around Rs. 6,000. It's excellent value if you're trying to spend as little as possible, but if your budget can stretch just a few hundred rupees, do consider the 250GB WD Blue.