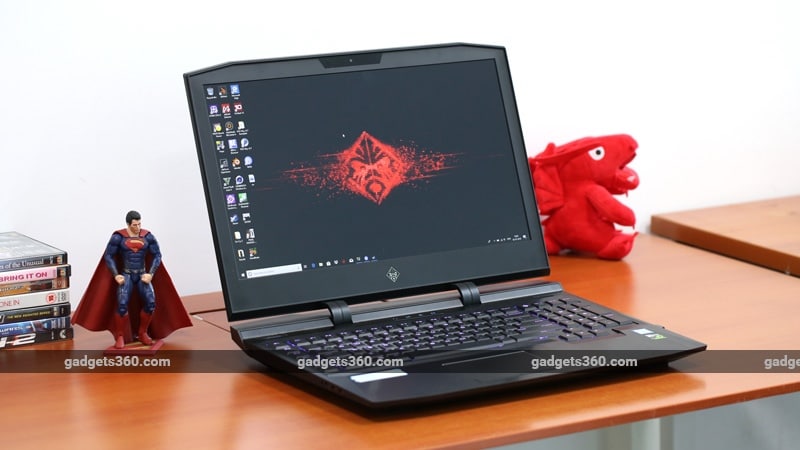 Gaming laptops continue to be in high demand even though the PC market in general doesn’t seem to be going anywhere. According to a recent report by IDC, HP took the lead in PC market share in India for the first quarter of the year, partly thanks to its focus on gaming systems.

In March this year, the company launched its Omen X portfolio of gaming devices in India, which includes desktops, laptops, accessories, and even a VR backpack. The ‘X’ denotes flagship-level products, and today we’ll be testing the fully specced-out Omen X laptop. More precisely called the HP 17-AP047TX, it's built as more of a desktop replacement. The Omen X features some of the most powerful components that Intel and Nvidia have to offer today but has a staggering price tag. Let's see what you get for all your money.

HP has done a great job with the construction of this laptop. The mix of metal and high-quality plastic makes the Omen X feel incredibly sturdy, as a result of which there’s barely any flex in the body. The sharp lines and aggressive stance give it quite an imposing look too. However, it’s massive - both in size and weight. It works well on a desk but at nearly 5kg, it’s not what you’d call comfortable on your lap. Even though it’s technically a laptop, it’s not designed to be carried around.

You get plenty of customisable LED lights on the lid, at the back, and of course the keyboard. All of them are RGB LEDs so you can go crazy customising them. The supercar-inspired rear exhaust vents look cool, and ideally these should have be lit up as well. HP Omen X has a Gigabit LAN port, two Type-C ports (both Thunderbolt 3), Mini-DisplayPort, HDMI, and a USB 3.0 port at the back. The rest of the ports are placed on the sides of the laptop, and include two more USB 3.0 ports, separate sockets for headphones and a microphone, and a SD card slot.

The lid is held in place by two metal hinges, which have an interesting semi-circle design similar to what we saw on HP’s Spectre 13 Ultrabook, and give the illusion of a floating lid. The lid doesn't tilt too far back (roughly 120 degrees), but the display has excellent reinforcement. We noticed no pixel warping even with applied pressure. The 17.3-inch display on the HP Omen X only has a full-HD resolution, as the 4K option isn’t available in India, but you do get a refresh rate of 144Hz and Nvidia’s G-Sync. Colours are fairly punchy, and we found the brightness to be adequate. The thick borders all around the display look a bit dated, but there's a webcam at the top and it supports full-HD video.

The sculpted metal palm-rest area is quite spacious, and the trackpad works well too. You get individual buttons for the trackpad, which is what we expect from a gaming laptop. Of course, there's a full-sized mechanical keyboard. The keys have per-key RGB backlighting with good travel and tactile feedback. We also appreciate the fact that the direction keys are well separated from the rest of the keys, like you’d find on a desktop keyboard.

The HP Omen X has dedicated button to launch Omen Command Centre, which is your go-to app for changing the LED lights, macros, and overclocking settings. On the left of the keyboard, you get a column of six programmable keys, which can be assigned shortcuts for Windows commands or even combos in games. You can also use them with the ‘Fn’ key, giving you an additional set of shortcuts.

On the bottom of the laptop, there are plenty of air intake vents and a little acrylic window that gives you a peek at the components inside. However, there’s no hatch so you’ll have to unfasten a bunch of screws to get the bottom off. The laptop ships with a massive charger, which looks like a little set-top-box. You also get a USB Type-C to VGA dongle in the package.

In India, the Omen X is available in three configurations and all of them feature Intel’s Core i7-7820HK CPU. This is a somewhat outdated processor, considering there are newer six-core 8th generation parts in the market, but it’s still offers plenty of power. It's also one of the few laptop CPUs with an unlocked multiplier for overclocking. It’s a quad-core, multi-threaded CPU with a maximum base clock speed of 2.9GHz and integrated Intel HD Graphics 630.

The Omen X ships with Windows 10 Home edition, along with the usual variety of preinstalled apps from the Windows Store. HP also throws in some of its own apps along with some third-party trial software. HP CoolSense is supposed to automatically adjust performance and fan speed depending on whether you’re using the laptop when moving around or in one place. Recovery Manager is a handy utility that lets you create backups and also keep all your drivers and software up to date, including BIOS updates. Omen Audio Control lets you tweak the sound output.

The main piece of software that you’ll probably be using the most is Omen Command Centre. The main page gives you an overview of major resource utilisation, along with the current operating temperature of the CPU and GPU. The next tab lets you tinker around with the lighting for the keyboard and the exterior of the laptop. It’s easy to customise this, and you get some presets too. Next up is a page that lets you set up macros for the P1-P6 buttons. The Network Booster tab lets you prioritise Internet traffic for your games. You can leave this at auto or manually set priorities for different applications.

Finally, we have the overclocking tab, which lets you bump up the turbo frequency of the CPU by changing its multiplier and core voltage. There’s even a built-in benchmark that lets you check how stable your overclock is. We managed to get all the cores running at 4.5GHz with a minor voltage bump of 0.5v. We were also able to benchmark GTA V without the laptop crashing, which is good. Here, we saw a performance improvement of 9fps, compared to the stock CPU settings.

The Omen X easily ploughs through pretty much any app you throw at it, which is to be expected from such a high-end machine. Boot times are quick, and thanks to the SSDs in RAID, we managed to get some pretty impressive read and write scores in the SiSoft Sandra benchmark. We would have liked the option of a Quad-HD or 4K panel for the top-end model, as text isn’t the sharpest when stretched to this size.

We didn’t notice any slowdowns when multitasking. CPU performance is good but still lower than what Intel’s newer 8th gen parts deliver, as we saw in our review of the MSI GS65 Stealth Thin 8RF. Tasks such as video encoding, 3D rendering, and file compression take anywhere between a couple of seconds and a few minutes longer to complete, when compared to the Core i7-8750H CPU.

When it comes to games, the Omen X delivers excellent performance thanks to the GTX 1080 GPU. In synthetic benchmarks such as 3DMark Fire Strike, we got a score of 15,359, which is good. The laptop performs very well in real-world gaming too. In GTA V, we averaged 68fps with everything maxed out. While gaming or doing anything CPU- or GPU-intensive, the exhaust fans ramp up quickly and get quite loud. Even in a fully air-conditioned room, the fans are noisy and can be quite distracting. However, we’re happy to note that the keys and the palm rest area stay cool.

The full-HD resolution of the display doesn’t really pose much of a challenge for the GTX 1080, so you can expect to run even the latest titles with ease. In FarCry 5, we averaged 90fps with the graphics settings at the Ultra preset. In Metro: Last Light Redux, we averaged 84fps with the graphics quality and tessellation set to the highest level. We easily managed to max out the graphics quality in Doom, averaging around 107fps in the Foundry level. Audio is good, and we managed to get decent separation from the stereo speakers when playing games. This laptop doesn't get as loud as some others we've used, such as Acer's older Predator offerings, but it's decent.

If you’re buying a laptop of this calibre then battery life should be least of your priorities. Plus, considering its size and weight, it’s most likely going to spend its life on a desk, next to a power source. If you’re still feeling adventurous, then you should expect about three-and-a-half to four hours of battery life on average with casual usage. In our Battery Eater Pro test, the laptop surprisingly ran for a smidge more than two hours, using the Intel GPU.

Verdict
The HP Omen X costs a huge premium in India, compared to what it’s retailing for in the US. This very same configuration costs roughly $3,490 (plus taxes), which translates to about Rs. 2,40,000. However in India, you’ll be paying Rs. 3,26,391, which is a big jump. In terms of competition, the Dell Alienware 17 is one of the few 17-inch laptops that comes to mind, with similar core features for around the same price. If you can live without the mechanical keyboard, then the Dell will get you a higher resolution G-Sync display (Quad-HD) along with a decently high 120Hz refresh rate and the company also recently refreshed its gaming line with 8th generation Intel CPUs.

The Omen X offers very good performance but you'll be paying a high premium for it in India. Plus, given the fact that most of the gaming laptops launched this year sport 8th gen Intel CPUs, we expect to see a refresh fairly soon.