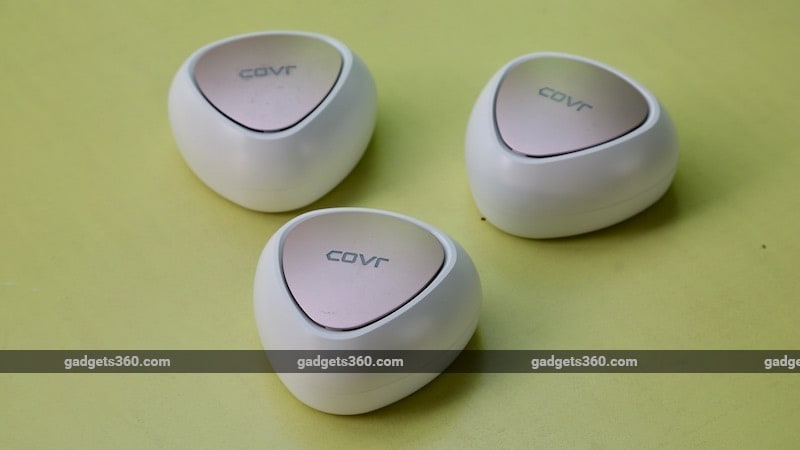 Mesh routers are the latest trend in the world of Wi-Fi, and for good reason. If you need seamless coverage across a large area, traditional Wi-Fi routers don't cut it at all. This is where mesh routers come in, offering you fast, easy-to-use Wi-Fi on a single network (SSID) across large homes without the need to mess around with wires or Wi-Fi extenders.

We've reviewed the Netgear Orbi in the past, a relatively high-end mesh Wi-Fi router system priced at around the Rs. 30,000 mark. The product we'll be reviewing today is a more affordable offering from D-link.

The D-link Covr-1203 consists of three fairly small, puck-shaped units that are all powered via USB Type-C ports and have two Gigabit Ethernet ports each. The three units look indistinguishable from the top, though if you turn them around you will see that one of them is labelled “Point A” and the other two are both “Point B”. As you might have guessed, the Point A is the ‘main' unit which will be your gateway to the Internet, while the other two are satellite units used to extend your network.

The Ethernet ports on all three units are simply labelled ‘One' and ‘Two', instead of LAN/ WAN as in most routers. On the Point A device, the first port is what would traditionally be called the WAN port, i.e. this is where you would connect your modem or DSL line. This leaves just one LAN port to connect wired devices to the unit, which we found disappointing, though it will probably not be an issue in most typical households.

Setting up the D-Link Covr was a relatively simple process, though it wasn't withouts its quirks. As you would expect, you need to power on the Point A unit and connect it to your modem. Then, connect to it via Wi-Fi and point your browser to http://covr.local — or you can download the D-Link app on your mobile — and you'll be greeted by a wizard that detects the type of connection you are using. If necessary, you will need to enter basic information for your Internet service provider, like a username/ password, if you are using a PPPoE connection.

Once you've entered your Internet connection details and other basic details such as the Wi-Fi network name you want to use, you will be asked to place the additional units around your house. While the wizard says you should be able to add each node automatically, our experience was different. Once the Point A was ready to go, we had to connect each Point B to the Point A via a LAN cable and wait for the Wi-Fi settings to be synced; a step we found described in the setup guide leaflet that came in the box. This took a couple of minutes for each Point B, after which they were ready to be placed away from the main unit.

Each D-Link Covr unit is fairly small and can be easily hidden out of the way. Each unit comes with a Rose Gold top cover plate that can be removed and replaced with one of two alternatives that come in the box. The idea is to complement your décor, but the choices you get are Ocean Blue and Gold, which really limit this.Popping out a plate and putting another in is a simple process, though we are not sure how many people will actually bother with this.

Talking about things that will definitely appeal to a wide audience, we didn't really face any issues with the performance of the D-Link Covr-C1203 in the three weeks that we spent testing this Wi-Fi system. We could enjoy our 100Mbps Internet line throughout our 1750 sq. ft. duplex apartment without any issues. We got full Wi-Fi signal throughout the house, though the network didn't extend into the corridor outside the apartment like with our Netgear Orbi RBK50 unit.

The Covr-C1203 claims a range of 5000 sq. ft., but those tests are performed in ideal conditions, and the real-world experience with the concrete walls of Indian homes can vary significantly. Based on our experiences testing this router and the previous one, the Covr-C1203 should be ideal for apartments that are 2000 sq. ft. or smaller, though the layout can make a big difference.

The unit claims a maximum speed of 866Mbps on the 5GHz band. We used the Wi-Fi mapping tool NetSpot and were able to record wireless transmission speeds of around 700Mbps when standing right next to the router. As we moved away, the speeds declined rather drastically, though not to the point that would impact basic Internet usage. Due to their small size and lack of external antennas, the individual Covr units can't quite match up to the likes of Netgear Orbi in terms of the area they can service at high speeds, but the fact that you get three units could make up for their limitations in most typical scenarios.

In fact, having three units instead of two gives you additional flexibility in terms of placing them around your home. This is especially useful if you have an unusually-spaced structure — like an L-shaped apartment, or a unit that includes a long, narrow area that needs Wi-Fi coverage — where you can experiment with keeping the units in different places and potentially find an arrangement that exceeds the range that a two-unit setup would offer in the same situation.

The two Point B Covr units can talk directly to each other if necessary, so you can extend your Wi-Fi network in any direction, though we noted that if the Point A is in range, the Point B units prefer talking to it directly, instead of talking to the other Point B, presumably to minimise the number of “hops” needed to transmit data. Each Point B Covr unit also has two Ethernet ports that can be used to plug in wired devices. This is especially useful if you have a TV that doesn't support Wi-Fi but has an Ethernet port.

The Covr system supports Multi-User, Multiple-Input, Multiple-Output (MU-MIMO) and a feature called Smart Steering. While the former is now standard in most premium routers, the latter is an interesting concept that's designed to automatically shift devices from 5GHz to 2.4GHz if the former band is getting too crowded.

This sounds like a bad idea since the 5GHz band is supposed to be free from interference, but if the 5GHz band itself starts to get crowded compared to the 2.4GHz band around you, this could actually give you better results. Of course, it's nearly impossible to create network conditions that would allow us to test the effectiveness of this solution in our setup, so we can't comment on the kind of impact Smart Steering has in the real world.

In terms of other features, you get IPv6 and VLAN support; support for a guest network that can be easily turned off or on; dynamic DNS support; a firewall with basic security features; and port forwarding to let certain applications through the firewall, if you know what you are doing. There's a basic website filter that lets you blacklist or whitelist certain websites, though you have to add these manually and you can't point the router to lists on the Internet that are automatically updated.

The D-link app available on Android and iOS can also be used to monitor the network and perform basic operations such as changing your Wi-Fi settings, quickly enabling or disabling the guest network, or simply checking what devices are connected to the network at any moment. You can even set a schedule for each device, which can be useful, say, if you don't want your kids to access the Internet between certain hours.

All of this can also be done via a Web-based interface as well, which does a decent job of keeping the basic options accessible for casual users, while keeping advanced functionality within the reach of power users. We also liked the fact that neither the app nor the Web-based interface forced us to sign up for a D-link account.

The QoS section of the Web-based panel, for example, lets you prioritise specific devices by simply dragging them into buckets. As is evident from the screenshot, D-link has done a good job of coming up with a UI that takes the complexity out of this task.

Only one device (obviously) can have the “Highest” priority, two others can be set to have “High” priority, and up to eight others can be given the “Medium” priority, giving them preferential use of your bandwidth than other devices that are not in any of the lists. This way you can, for example, prioritise your Chromecast or smart TV to ensure that buffering is minimised if a bunch of other devices are using the Internet at the same time.

Each Covr unit has an LED that lights up in a different colour to indicate its current status. White tells you that everything is working as expected, while other colours are used to indicate various error/ warning states. The light is rather bright and can be a bit bothersome at night if a unit is placed in a bedroom, for example, but thankfully, a recent firmware update added the option to switch off the light on all units.

While on the subject, the D-link Covr can also be set up to automatically update itself, which means you have one less thing to worry about. By default, the units will be updated between 3:30am and 4:00am, if new firmware is available, but you can change this time slot via the settings.

Verdict
The D-Link Covr-C1203 is a no-nonsense mesh networking solution that does a great job of blanketing a reasonably-sized home with fast, reliable Wi-Fi. While each Covr unit might lack the range of more powerful systems like the Netgear Orbi, the three units do a stellar job when put together, potentially extending your network into corners that'll otherwise be hard to cover.

The overall network speed might not be as high as with the Orbi, so if you move a lot of large files across your network, then you should probably consider investing in a more expensive solution. But if your primary use case is sharing a fast Internet connection across multiple devices in your home, then the Rs. 12,990 D-Link Covr-C1203 offers an excellent entry-point into the world of mesh Wi-Fi.