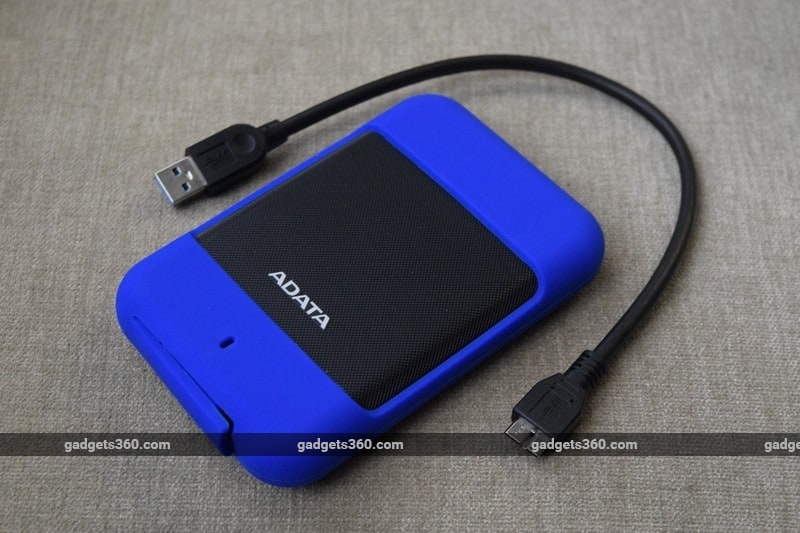 Adata is known primarily for flash memory products such as RAM and SSDs, but it does also have a fairly large portfolio of external hard drives. This is a massively commoditised market, and is dominated by WD and Seagate which have the advantage of manufacturing their own drives. Adata competes by offering competitive prices, but also by innovating with its designs in ways that the bigger brands don’t. We’ve seen some pretty funky shapes and colours in the past – some are just whimsical, but others are designed to be rugged and reliable.

The latest of these is the Adata HD700, which promises water and dust resistance as well as protection from shock damage in case of falls or physical impact. It isn’t as small or thin as most common drives, but also doesn’t have a garish industrial or military design. Let’s see how well it performs in testing, and if it’s worth choosing over the usual WD and Seagate options.

Adata HD700 look and feel
The most obvious thing you’ll see about the Adata HD700 is its thick exterior silicone sheath. The HD700 is available in black with either blue or black silicone, and our review unit was blue. It’s a rather bright, electric shade which stands out against the black plastic and is quite eye-catching.

The sheath almost encases the entire drive, but has a cutout on the top to show off a bit of the main unit’s textured plastic, as well as a shiny Adata logo. You can stretch it and pull the plastic body out through this hole, but the drive was clearly not designed to be used this way. The silicone texture does pick up dust and lint from the insides of bags, so it’s good that you can take it off to wipe.

Another much smaller hole on the bottom lets you can see the HD700’s regulatory information sticker. The two cutouts are designed in such a way that the corners and edges of the drive are always well protected, and it’s extremely unlikely for any exposed plastic to hit the ground in case the unit falls.

There’s also a thick rubber flap covering the Micro-USB 3.0 port. Adata went for USB Type-C on the SE370 external SSD which we reviewed recently, but we don’t mind the legacy standard here as we aren’t losing any speed benefits and cables can be shared between drives. The rubber flap is flanged and stays pressed into the drive’s plastic body, which makes it waterproof and dustproof as claimed.

Thanks to its sheath, the HD700 is thicker than most external hard drives. It definitely won’t fit in the average trouser pocket, but you can toss it into any bag. It isn’t sleek but it isn’t ugly either – and a lot of people will take the added protection over looks any day.

Adata HD700 specifications and performance
There isn’t much to say about the HD700. It’s available in 1TB and 2TB capacities, and we have a 1TB unit for review. The drive inside is manufactured by Toshiba, the last remaining competitor to WD and Seagate. Transfer speeds are described as 5Gbps which is the theoretical limit of USB 3.0, not what you can expect in real-world usage. You get a short USB 3.0 cable and a tiny quick-start leaflet in the box.

The drive is rated IP56, which implies reasonable protection against ingress when exposed to water and dust, but note that you can’t leave the drive submerged in water or drop it into a swimming pool and expect it to work fine. Adata also claims a rating of MIL-STD-810G 516.6 for shock resistance, although this is not a specific standard and does not have any strict testing protocols.

Adata also boasts of 256-bit AES encryption that appears to be possible only with software. To that end, the company offers free downloads of its HDDtoGo utility. This includes a few portable apps and a data sync tool, but seems more suited for smaller USB flash drives.

We tested the Adata HD700 on our standard test bench with the following components:

The 1TB drive showed a total formatted capacity of 931GB. SiSoft Sandra’s file system test gave us sequential read and write speeds of 103.89Mbps and 101Mbps respectively, while random read and write speeds were 101.74Mbps and 64.14Mbps respectively. Random speeds are much more indicative of how a drive will perform in everyday use, as data is rarely organised perfectly or accessed the exact same way.

Verdict
Adata might not be the first name that pops up when considering a hard drive, but its products are solid. The HD700, in particular, offers a sense of durability that the big names do not. Plus, it stands out in a crowd and if that still isn't enough, it has a three-year warranty.

Hard drives sell for well below their official MRP online and at computer markets across the country, and we’re seeing the HD700 sell for a premium of roughly Rs. 700 compared to ordinary drives. Frequent travellers, or those who work on projects outdoors might find that a great deal. You can go for it if you think that’s worth it for the peace of mind a silicone rubber coating might provide, or shop around a bit more to see what costs the least.

Google Assistant Lets You Share Articles via Voice Command to Google+, Twitter
MacBook Price in India Increased by Up to Rs. 10,000