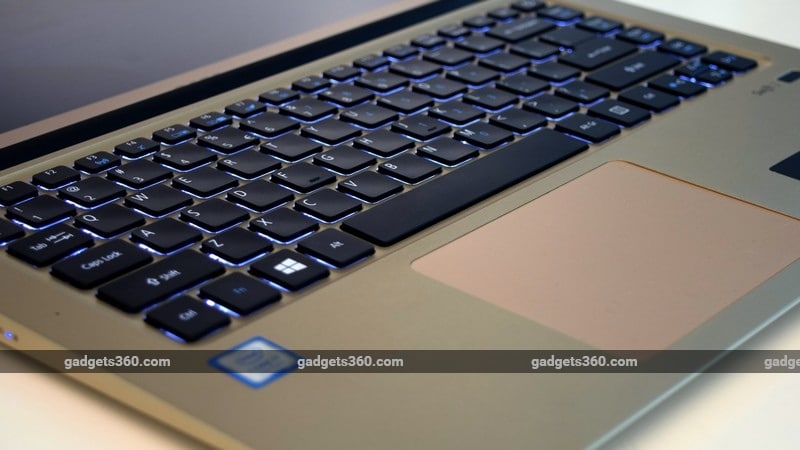 When it comes to aggressive laptop pricing, it’s hard to beat Acer. The Taiwanese manufacturer has always offered cut-throat prices in India, especially when it comes to its premium offerings. The company’s new Swift 3 is yet another example of this. Acer sells a top-end variant of its new ultra-portable laptop for under Rs. 65,000, which is significantly lower than what similarly configured laptops from the competition cost.

The Swift 3 is essentially a Windows version of Apple’s MacBook Air but it also competes with other Windows offerings like HP’s Envy line, the Dell XPS 13 and Lenovo’s IdeaPad 500 series. This laptop comes across as a very good value offering for students and professionals looking for a thin and light laptop that doesn’t skimp on performance. So how has Acer managed to achieve this? And what sort of compromises has it made along the way?

The Swift 3 uses high-quality materials for its construction which makes it durable, and also a bit heavy. The matte aluminium body offers decent grip and there’s no flex to the lid or in the keyboard area, which is very good. The display tilts 180 degrees backwards and the hinge has very good torsion so it can hold the lid firmly in pretty much any position.

The lower half of the Acer Sift 3 is wedge-shaped, but it's thick enough to accommodate full-sized ports. On the left, we have HDMI, USB 3.0, and USB Type-C (Gen1, 5Gbps) ports along with the charging connector and LEDs for hard drive activity and charging. On the right, we have an SD card reader, headphone/ microphone combo socket, a USB 2.0 port and a Kensington lock. Acer has cleverly placed the intake and exhaust vents near the hinge so you never accidentally hamper air circulation. The edges of the Swift 3 are rounded so you don’t feel anything sharp when using it.

The 14-inch LED-backlit display is one area in which Acer has had to compromise. Sadly, the resolution is also just 1366x768 and not full-HD or higher, which according to Acer, was a choice it made in order to keep the price as aggressive as possible. It’s disappointing that we don’t even have a full-HD option in India like most other countries. Colour reproduction is quite average and vertical viewing angles are weak. Thankfully, brightness is good enough and the matte finish means that reflections won't interfere with your work. The display has fairly thick borders all around, which increases the footprint of the laptop a bit.

We like the chiclet style keys on the Acer Swift 3 as they are well spaced and are slightly sculpted so that your fingers don’t slip off when typing. Key travel is also good and they aren’t too noisy. We wish the spacing of the direction keys had been better. Also, the power button shouldn’t have been part of the standard keyboard cluster as it’s easy to mistake it for the Del key. The trackpad is large and spacious and you even get a fingerprint sensor on the right palm rest area. The stereo speakers are placed on the bottom of the Swift 3. The four rubber feet give the laptop decent elevation and grip when used on a flat surface.

The top-end variant of the Swift 3 in India has an Intel Core i7-7500U processor, 8GB of DDR4 RAM, and a 256GB SSD. These are pretty solid core specifications for a thin-and-light laptop. Other specifications include Wi-Fi 802.11 ac, Bluetooth 4.0, an HD webcam, and a 4-cell battery. The Swift 3 isn’t easily upgradeable as it would require you to open up the entire base. You’re better off heading to an Acer service centre to avoid any warranty issues.

The laptop comes with Windows 10 Home 64-bit, which works smoothly. You also get the usual suite of Acer programs pre-installed including Acer Portal for the company’s ‘build your own cloud’ feature. Other programs include Acer’s Quick Access, which gives you toggles for a blue light filter and power-off USB charging; and Care Center which lets you check and maintain the integrity of your system. You also get a 30-day subscription to Norton Internet Security, but the biggest bonus is that get the full version of Microsoft Office Home & Student 2016 suite free with this laptop, which is typically worth Rs. 6,899 if you buy it separately. This gives you Word, Excel, PowerPoint, and OneNote without a yearly subscription.

We didn’t have any trouble with the Swift 3 in our day-to-day work. The laptop handles Windows and most apps very well thanks to the SSD and a good amount of RAM. Multitasking is managed well too, and the trackpad easily handles two-finger scrolling and Windows 10 gestures. The keyboard and palm rest area doesn’t get hot when the laptop is charging or being used heavily. The base does get a bit hot, but nothing close to alarming levels. The fingerprint sensor is also quick at authentication and works as part of the Windows Hello security framework.

The laptop fares well in benchmarks. We ran through our usual suite of synthetic tests and got decent results. In PCMark 8, we got 3729, 4352, and 3524 points in the Home, Creative, and Work test suites respectively. The SSD also performs very well as we got a sequential read bandwidth of 1.4GBps while the write bandwidth topped out at 517GBps. The integrated GPU is also good enough to handle casual 3D games from the Windows Store such as Asphalt 8: Airborne.

The Acer Swift 3 can handle 4K video playback quite well although it struggles a bit with such clips when on battery power because performance is reduced to extend battery life. Brightness is good enough but colours aren’t too punchy. Pushing the brightness level up tends to burn out white levels and ruin contrast. The HD resolution isn’t sharp and there's visible pixelation around icons and text. The stereo speakers produce loud and full-bodied sound when they have something to reflect off, like the surface of a table. When using the Swift 3 on your lap though, they sound weak and tinny. Images from the HD webcam aren’t very noisy, which is nice to see.

Acer claims a battery life of up to 12 hours, however, we found it to be closer to about 6-7 hours of actual usage. Our graphics-heavy Battery Eater Pro test gave us a very weak result of only 1 hour and 37 minutes, but real-world usage is better. We were just about able to get through a full work day on a single charge.

The Swift 3 is the budget-friendly version of Acer’s flagship Ultrabook, the Swift 7 (Review). In India, Acer has had to make certain compromises with the units being sold here in order to keep the price as aggressive as possible. In a way, it has worked in Acer's favour, as you’d be hard pressed to find any slim laptop with these specifications at this price right now. The pricing of Dell’s XPS 13 (Review) starts at above a lakh while HP’s Envy 13-d115tu sits slightly below it. Most of the models that are priced in the range of the Swift 3 have a Core i5 CPU, but then again, they also usually have full-HD displays, which the Swift 3 lacks.

If you’re looking for a powerful thin and light laptop for work, then it’s hard to find better value than the Swift 3 right now. You can get it online starting at Rs. 36,000 in lower configurations if your budget is very tight, but even the highest-end offering looks good in terms of value. The low-resolution, low-quality display is the only major flaw here. Plus, the keyboard layout could have been slightly improved.