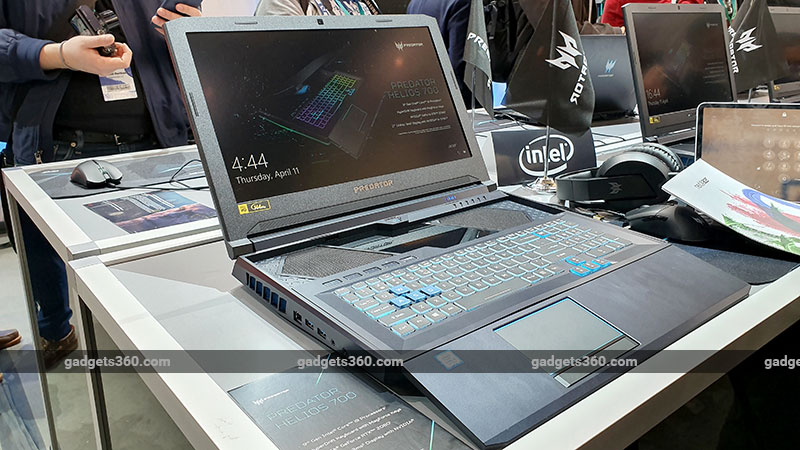 This year, Acer's theme for its annual hardware event was creativity. The company introduced its new product line called ConceptD, which is a new ecosystem of products designed for professional creators. Of course, it wouldn't be an Acer event without some new gaming laptops, and the one that definitely hogged the most attention was the new Predator Helios 700.

Unlike the existing Predator Helios 300, which is relatively portable, the Predator Helios 700 is designed to be a desktop replacement and is large enough to accommodate some pretty powerful components. Gadgets 360 was present at the next@acer event, and we got to spend some hands-on time with the company's new flagship gaming laptop. Here's what we think so far.

The first thing that grabbed our attention is the sheer size of the Predator Helios 700. It's very chunky, with sharp angular lines running across the sides and the rear exhaust vents. The display has rather thick bezels on all sides, which makes it look slightly dated, if we're being honest.

Compared to Acer's redesigned Helios 300 or even the new Nitro 7 and Nitro 5 laptops, the Helios 700 looks a little out of place. It's also very heavy, weighing roughly 4.5kg. This is definitely something you won't be lugging around in your backpack.

The main feature of the Helios 700 is its HyperDrift keyboard. When you need extra cooling or want to overclock the CPU and GPU, you can slide the keyboard outwards to reveal two additional intake fans. The sliding mechanism isn't motorised (which would have been way cooler) so you simply grab one of the grooves in the keyboard and pull it towards you. The sliding mechanism is very smooth and there's a definite ‘click' when you slide it out or back in.

The keyboard extends about one-fourth of the way outwards and the palm-rest area angles downwards to give you a more ergonomic angle for gaming and typing. We found the Predator Helios 700 fairly comfortable to use, and one immediate advantage we noticed is that we didn't need to stretch our hands outwards too much, since the keyboard slides closer to the user.

Apart from the fans, you can also get a peek at the copper heatpipes inside the laptop through a glass panel. You get a little sound effect and some animation on the glass every time you slide the keyboard out.

The other new feature Acer is touting is the use of MagForce keys for the WASD buttons. These have linear switches which are said to offer more precise control when gaming. The keys are slightly taller than the rest of the keys on the keyboard and have a different feel, as they have more travel. These linear switches have varying degrees of actuation depending on how much pressure you apply. These keys are swappable, so you can fit standard keys in their place when you need to type.

In terms of power, the Predator Helios 700 didn't seem to have any issues tackling the heavy game titles demonstrated at the event. We couldn't spend a lot of time gaming at the demo area, but we did play a bit of Battlefield V, which ran very smoothly.

You can get this laptop with up to a 9th Gen Intel Core i9 processor and Nvidia's GeForce RTX 2080 GPU. When fully spec'd, this laptop can have up to 64GB of DDR4 RAM and up to 1TB of SSD storage in RAID 0 as well as a hard drive of up to 2TB. The 17.3-inch full-HD display seemed quite bright, and even with overhead spotlights shining, we had no trouble viewing content. The matte finish also helps reduce reflections.

The Predator Helios 700 has a 5.1 speaker system but this isn't something we were able to test since it was pretty loud at the demo area.

Acer will put this laptop on sale this month in the USA, with prices starting at $2,700 (roughly Rs. 1,87,800). We don't have an exact date when this is coming to India, but Acer tells us that we can expect it around Q3 this year.

The Helios 700 will be competing with the likes of the Alienware Area-51m, MSI GT75 Titan, and HP's Omen X gaming laptops. We'll be sure to put it through our full series of tests when it launches here, so stay tuned for that.

Disclosure: Acer sponsored the correspondent's flights and hotel for the launch event in New York.

Which Are the Best Smartphones Under Rs. 10,000 in India?
Google Pay Now Lets Users Buy, Sell Gold in India With MMTC-PAMP Partnership