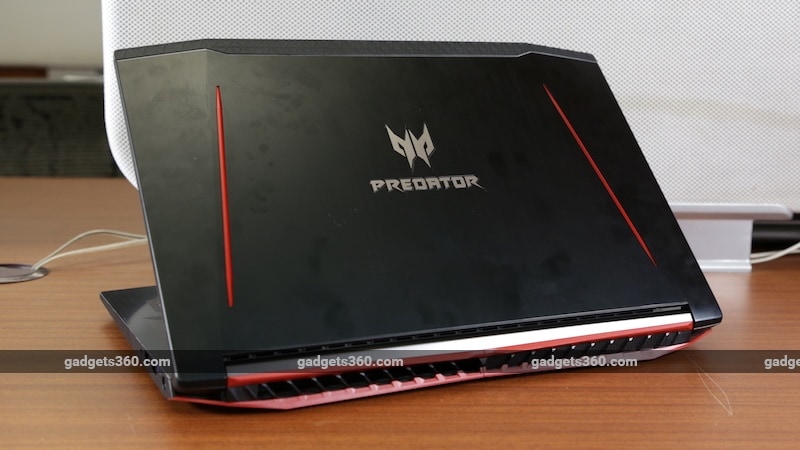 The gaming PC segment is always an exciting place, be it on the desktop or laptop side, with OEMs constantly refreshing their offerings to keep customers interested. In fact, gaming is one of the few bright spots in the PC market, which has been in decline for a while, but seems to be now faring a bit better.

Acer added some new models to its Predator gaming lineup this April, as the company hopes to consolidate its portfolio and focus primarily on gaming and VR. It took a while for Acer to bring its new gaming models to India, but the Predator Helios 300 is finally here and today we’ll be testing it. With prices starting at Rs. 1,29,999, let’s see how it fares.

The design of the Helios 300 is similar to that of Acer’s previous Predator models, one of which we tested over a year ago, but with some new design cues and a lower weight. The 15.6-inch model is now slimmer than before and also lighter at 2.7kg (compared to 3.6kg). The body is still made mostly of plastic but Acer has provide some metal reinforcements for the lid and keyboard area. The design is aggressive like before, with supercar-like exhaust vents around the back and reflective details on the lid. However, the Predator logo isn’t backlit. The base is made of plastic, and there are large vents on the bottom.

We found a small degree of flex with the lid, but the metal plate ensures it doesn’t affect the the screen as there’s no visible pixel warping when you apply pressure. There’s a single, long hinge, running across the length of the laptop that keeps the screen in place. The screen tilts back about 160 degrees and the hinge offers good torsion. The 15.6-inch panel has a non-reflective surface, which is good when you’re sitting under artificial lighting. It has a 1920x1080-pixel resolution so visuals are sharp. Colours are also good, this being an IPS panel. However, the brightness doesn’t get high enough for us. We found ourselves maxing out the brightness level most of the time, and it was still just about adequate.

The keyboard area feels vey sturdy, once again, thanks to the use of an aluminium plate. There’s no flex when typing and there’s plenty of room even for large palms. The trackpad is fairly big too, with smooth tracking and clicky buttons. The keys are decently spaced but aren’t very comfortable for typing. Acer has made space for a number pad but in doing so, it compromised on the spacing for the direction keys as well as the right Shift and Enter keys. During regular typing, we often found ourselves fumbling and hitting the wrong keys. The Power button is part of the cluster too, which we don’t quite like, and there’s only a single level of red LED backlighting for all keys.

Physical connectors include a total of four USB ports, of which, there are two USB 2.0 ports, one USB 3.0 port, and one Type-C port (USB 3.1 Gen1). There’s also an HDMI output, Gigabit Ethernet port, SD card slot, and headphones/mic combo socket. The Helios 300 has two LEDs on the right, to show the charging and power status. Like any enthusiast PC worth its salt, the Helios 300 has two quick-release hatches on the bottom allowing you to access the RAM and hard drive. however, there’s no way to get to the SSD without opening up the entire base.

The Helios 300 is based on Intel’s 7th Gen 'Kaby Lake' Core i7-7700HQ CPU, and not a newer ‘Kaby Lake Refresh’ or 8th gen model, like the one we recently saw in Acer’s Aspire 5 and in the recently launched Nitro 5 Spin laptop. Acer India has informed us that the Helios 300 won’t be getting the newer CPUs anytime soon. Other specifications include a single 8GB stick of DDR4 RAM, a 128GB M.2 SSD from SKHynix, and a 1TB 5400rpm hard drive from Western Digital.

Graphics processing is handled by the onboard HD Graphics 630 GPU for everyday tasks and Nvidia’s GeForce GTX 1050 Ti for demanding games. The discrete GPU has 4GB of GDDR5 RAM and supports Optimus technology, which means it switches itself off when not needed. There’s also Bluetooth 4, Wi-Fi 802.11ac with MIMO antennas, stereo speakers, and an HD webcam.

Acer ships the Helios 300 with Windows 10 Home 64-bit, and its own standard programs called Care Centre and Quick Access. The laptop also has Acer's PredatorSense software, which lets you control the fan speed for the CPU and GPU, and toggle Acer’s CoolBoost feature which increases the maximum fan speed during heavy use. The fans used here are custom-designed with metal blades for better airflow. The program also shows you a graph of the temperature and load of the CPU and GPU. You can overclock the GPU using two presets. This only works when the power adapter is plugged in and the laptop's battery level is above 40 percent.

The default clock speed of the GTX 1050 Ti at full load is 1708MHz, which bumps up to 1746MHz when you choose the ‘Faster’ setting. Switching to ‘Turbo’ mode increases that even further to 1797MHz.

The laptop has no trouble running regular Windows 10 apps and boot times are pretty quick, thanks to the SSD. The laptop runs silently when you're browsing the Web or working on Office documents as the onboard GPU is used for most of these tasks. However, fire up any application that taxes the CPU or GPU too much, and the fans become easily audible. During gaming, the fans are working overtime to keep temperatures down, and it sounds like a jet getting ready for take off. The base gets a bit hot, near the intake vents and you can feel a bit of the heat through on the left portion of the keyboard. The keyboard keys have decent travel for gaming.

The Helios 300 is still a heavy laptop even though it has shed a lot of weight compared to older Predator models. It’s not the easiest to carry around and is best used on a desk. In terms of performance, Intel’s last gen flagship CPU is still a solid performer. In PCMark 8, we got scores of 3720, 4558 and 3342 for the Home, Creative and Work test suites respectively. In other synthetic tests such as 3DMark, we got 6734 points in the Fire Strike test and a score of 18,796 points in the Sky Diver test.

Coming to real-world gaming, the Predator Helios 300 performs well. Since the SSD isn’t large enough for big titles, you’ll have to use the 1TB drive for installation. We tested all games at the monitor’s native resolution of 1080p, with varying degrees of eye-candy, depending on the game. In Rise of the Tomb Raider's built-in benchmark, we averaged around 55fps at the High preset using DX12. Bumping the quality up to the Very High preset dropped the average frame rate to 41fps, which is easily playable. Actual gameplay was mostly smooth but we encountered intermittent freezes, where the game would get stuck for a second and then resume at Very High, but this went away when using the High preset.

Metro: Last Light Redux is a taxing game, and averaged around 10fps with the quality preset at High and other settings such as Motion Blur and Tessellation set to Normal. Unfortunately, Doom refused to run properly as textures on the weapons and surroundings didn't load, despite multiple attempts. Deus Ex: Mankind Divided is another taxing game, and we managed to average 35fps using the High preset.

The forever gorgeous-looking FarCry 4 was no trouble at all for the Helios 300, even using the Very High preset. We managed to average 59fps, which is very good. Last but not least, we tried the overclocking settings. In synthetic tests like 3DMark, we saw in improvement of around six percent, whereas during actual gameplay, such as in the case of Rise of the Tomb Raider, we saw a boost of 12 percent in framerates. While this will vary from game to game, it’s nice to know that you can squeeze a little more performance out of the GPU when needed.

Audio from the stereo speakers is also good, and sound can be further enhanced with the Dolby Audio Premium software. The speakers are loud and the sonic signature is pleasant. The IPS display is suitable for video playback as colours are punchy and viewing angles are fairly wide. The HD webcam doesn’t produce very noisy images under artificial light when indoors, which is good.

We managed to get an average runtime of roughly 4 hours with the 4-cell battery, when we used the Helios 300 primarily for Web surfing. Battery Eater Pro ran continuously for 1 hour 23 minutes, using the integrated graphics. This laptop won’t last an entire workday on a single charge, so you’ll need to have the charger with you.

The Acer Predator Helios 300 is exclusive to Flipkart in the online space, and it’s now available for Rs. 89,990, compared to the launch price of Rs. 1,29,999. Keep in mind that this isn’t an official price reduction from Acer, only Flipkart’s pricing. If you’re looking for beefier internals then Acer has a Core i7 version of this laptop in retail stores which has 16GB of RAM, a 256GB SSD and an Nvidia GTX 1060 (6GB) for Rs. 1,35,550 (plus GST).

The closest competition to the model we reviewed is Dell's Inspiron 15 7567, which shares a similar configuration but lacks an SSD at this price. The Lenovo Legion Y520 (Review) is available in a variant that comes very close to the Helios 300 in terms of specifications and price but sports a standard GTX 1050, so you get a bit less graphics horsepower. Finally, there’s HP’s Omen line of laptops, which will cost you more than Rs. 1 lakh if you want a similar configuration as the Helios 300.

Once again, Acer hsa managed to offer a good set of specifications at an aggressive price (going by the online price). If we could improve anything, we’d ask for less noisy exhaust fans, as these things are a dead giveaway that you're sneaking in a quick round of Doom at your workplace. The brightness level of the display could have been better too and we didn’t really like the keyboard layout for serious typing. Overall, the Acer Predator Helios 300 offers good bang for the buck, if you can live with its little flaws.