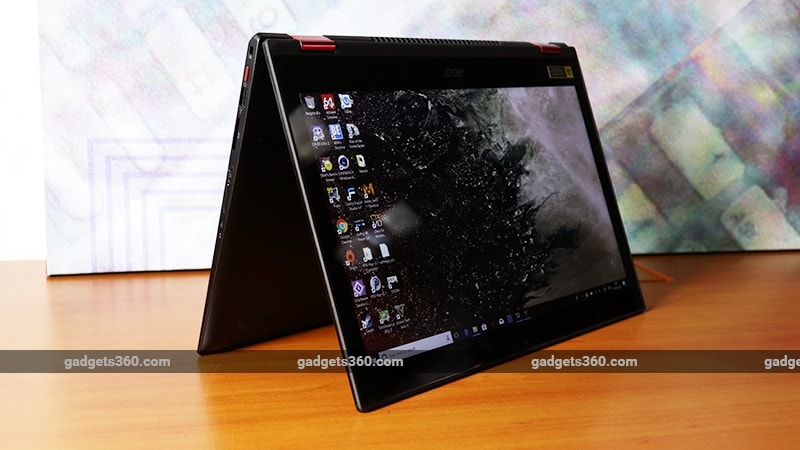 High-end gaming laptops are usually burdened with having to be bulky and ungainly, but they're built that way for good reason - all their power-hungry components require heavy-duty cooling. However, that landscape is slowly changing as mobile GPUs get more efficient and new design guidelines like Nvidia’s Max-Q emerge, geared towards providing the same horsepower but in slimmer form factors. We’ve already seen some of these examples such as the Asus Zephyrus and Acer’s Triton 700, but all have been priced upwards of Rs. 2,00,000 so far.

To meet the needs of gamers on a budget, Acer introduced the Nitro 5 Spin in the last quarter of 2017. This laptop measures just 17.9mm in thickness and is the first 2-in-1 gaming laptop to launch in India. Sure, we've had 2-in-1s with discrete graphics cards for a while, but none of them have been powerful enough to handle high-end games. With a starting price of Rs. 79,990, the Nitro 5 Spin looks like a very tempting option on paper. Let’s see how well it actually performs.

The Nitro 5 Spin is a 15.6-inch laptop, so it’s quite a handful if you’re going to be carrying it around. Its slim profile definitely makes it easy to slip into a backpack but it’s still heavy at 2.2kg. Also, despite the slim body, it isn't based on Nvidia’s Max-Q design guidelines. It feels premium thanks to the all-metal body and the brushed aluminium finish on the lid. You can only get it in one colour trim, which is black with crimson accents. The lid attracts fingerprints and smudges pretty easily, so some attention will be is required to keep it looking clean. Acer boasts of having a special ExoAmp antenna design in the Nitro 5 Spin, which is visible on the edges of the lid, and promises better Wi-Fi range.

The 360-degree hinge offers good torsion, and the lid is held in place at most angles. You can of course flip the lid all the way around so you can use the laptop as a tablet. The 15.6-inch IPS display runs at a full-HD resolution, which results in decently sharp images and text. There’s a bit of jaggedness around text, but at normal typing distance, this isn’t too noticeable. The thick black borders around the display aren’t very aesthetically appealing but they help you grip the device when using it as a tablet (not that many would use a 2.2kg tablet too often, but still). The protective glass over the display causes a fair amount of reflection, so we had to use the laptop at full brightness most of the time, even when indoors.

The matte-finished palm rest area on the Acer Nitro 5 Spin is spacious and there’s a decently sized trackpad which is placed a bit off-centre so it doesn’t get in the way when typing. We have a full-sized chicklet keyboard along with a number pad. The keys are backlit in red, with only one level of brightness. We found the keys to be comfortable for typing without being noisy, and key travel is good, but we would have liked a better layout for the arrow keys.

The trackpad has a fingerprint sensor embedded in its upper left corner, which is used for Windows Hello authentication. The stereo speakers are placed between the two hinges and the speaker grille wraps around the edges on the top, so they fire upwards when you use this 2-in-1 in tent mode. The exhaust vents are also here, while large intake slits for fresh air are on the bottom. Unfortunately there’s no hatch for easy access to components.

On the left of the Acer Nitro 5 Spin, we have one HDMI port, one USB Type-C (USB 3.1 Gen. 1) port, and two USB 3.0 ports, while on the right, there are two status LEDs for power and charging, a volume rocker, a 3.5mm headphone and microphone combo socket, an SD card reader, one USB 2.0 port, and the power button. In the box, you can expect a charger and warranty leaflets.

We have the top-end version of the Nitro 5 Spin with us for review. This variant features an 8th Gen Intel Core i7-8550U CPU, 8GB of RAM, and an Nvidia GeForce GTX 1050 GPU with 4GB of dedicated GDDR5 memory. You also get a 256GB SSD as well as a 1TB hard drive. The base variant of the Nitro 5 Spin features a Core i5 CPU and no SSD. Other specifications include Bluetooth 4.1, dual band Wi-Fi 802.11ac, an HD webcam, and stereo speakers with a sub-woofer.

The laptop ships with Windows 10 Home 64-bit. You get a suite of software from Acer preinstalled, which includes Acer Portal, Care Centre, and Quick Access. Additional software includes a trial version of Norton Security, and a full copy of Microsoft Office Home and Student Edition. The Windows Ink workspace is enabled by default, which lets you access sketching and 3D modelling apps from one place.

The Nitro 5 Spin performs well in laptop mode. When running regular Web and office apps, the exhaust fans run silently so there isn’t any noise. However, fire up a game and the fans ramp up to a point where they are easily audible. This can be a bit distracting if you aren’t gaming with headphones on. We also found that the left side of the laptop's body gets hot after gaming for about 15 minutes or so. This is a bit of a problem as the WASD keys, which you’re going to have your fingers on most of the time, get fairly uncomfortable after a point.

Being a 2-in-1, the Nitro 5 Spin can be used in a variety of modes like tent and tablet. We found that tent mode could come in handy if you’re short of desk space, although you would need a controller or a separate keyboard. However, we felt it a bit impractical to use this device as an actual tablet, mostly due to its size and weight. The screen's touch response is good and we didn’t face any issues here. The trackpad also works well for Windows 10 gestures. You get a HD webcam and an array of four microphones along the top of the lid, which work well in picking up your voice for Cortana even when you’re some distance from the laptop.

The speakers on the Acer Nitro 5 Spin get decently loud and sound is good even when you're not in laptop mode. The left and right audio channels switch automatically, depending on what mode you’re using the device in. The Dolby software lets you tweak the sound, which is handy. Video playback is handled well for 4K media files and the display produces punchy colours. Viewing angles are good, although reflections are a bit of a bother at times.

Coming to benchmarks, the Nitro 5 Spin does well in this department too. The quad-core, multithreaded CPU gave us good scores of 3,806, 4,738, and 3,403 in PCMark 8’s Home, Creative and Work test suites. 3DMark Fire Strike gave us a score of 5,064 points, which is good considering the CPU and GPU in this device. The Micron SSD in the Nitro 5 Spin gave us a respectable drive score of 490MB/s in the SiSoft Sandra benchmark. The 1TB hard drive runs at a lower 5400rpm, so if you’ve installed games here, then you'll notice that loading takes a bit longer.

In actual games, the Nitro 5 Spin delivers good performance. All tests were conducted at the laptop’s native resolution of 1920x1080, while individual graphics settings were tweaked based on how well the game ran. We began with Rise of The Tomb Raider, which ran at an average framerate of 28.15fps as measured by the game’s built-in benchmark. This was with the Very High preset and FXAA enabled. We managed a similar framerate when actually playing the game too, which was smooth enough.

Metro: Last Light Redux is a demanding game, which proved to be a bit much for the Nitro 5 Spin even at the Medium preset and with no tessellation. Here, we averaged 9.33fps in the game’s built-in benchmark. Doom is wonderful game to test with, as it looks gorgeous and also runs well on even modest gaming systems. With the settings cranked all the way to the Ultra preset and with the Vulkan API selected, we averaged 57fps in the Foundry level. Gameplay was obviously very smooth and we didn’t face any slowdowns.

Deus Ex: Mankind Divided is a stressful game but the Nitro 5 Spin managed some respectable framerates here, giving us 28fps with the High preset using DX12, but with no anti-aliasing. Far Cry 4 might be a little old but it's still a very good-looking game even by today’s standards. Here, we got a very playable 31fps at the Ultra setting. We did have a few dips in the framerate during intense battles but these were very intermittent. Last but not least, GTA V delivered a smooth 33fps on average, with a mix of High and Very High settings.

The 4-cell battery in the Nitro 5 Spin managed to deliver a decent six hours of battery life on average, with light usage consisting of Web browsing and watching videos. The laptop also supports Nvidia’s Optimus technology, which shuts off the GeForce GTX 1050 when not needed. For non-graphically-intensive tasks and apps, the laptop uses the Intel UHD Graphics 620 capabilities of the CPU itself. The more demanding Battery Eater Pro test lasted for 2 hours, 17 minutes.

The Acer Nitro 5 Spin is a power-packed 2-in-1 gaming laptop. Right now, there’s nothing else quite like it in India, which is why it commands a slight premium of Rs. 91,990 for the top-end model. If you’re not going to travel a lot with your laptop and will be using it mostly on a desk, then you can find gaming models with slightly better specifications from Dell, Lenovo, and even Acer, at around this price. The Nitro 5 Spin is available through the company's authorised stores but you can also find it on Flipkart. The online price fluctuates quite a bit, and we once saw this very model going for as little as Rs. 83,990 during our review period.

The slim body of the Nitro 5 Spin is great for aesthetics, but it also gets quite hot when gaming, and that too right under your fingertips which isn't comfortable after a while. The display is also a bit too reflective and the exhaust fans get noisy when they ramp up. Hopefully in the near future, we'll see more slim and light gaming laptops, including 2-in-1s, from all the big manufacturers.