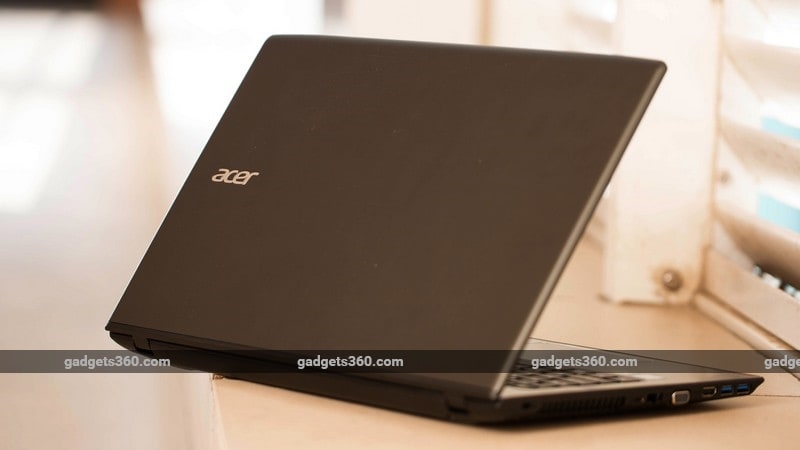 Acer is largely perceived as a value-for-money brand here in India. The company does offer a diverse range of high-end products, including gaming laptops like the Predator 15, Ultrabooks like the Aspire S13, and many more that should hit store shelves soon.

Today, we’ll be testing one from the Aspire E range, which is designed for everyday computing and a bit of multimedia work. The Aspire E5-575G is the higher-end model from the series, and features an SSD and a dedicated GPU, giving it a bit of gaming potential. Let's see if it manages strike a good balance between performance and price.

Design and build
Acer's E-series has never been about aesthetics, but looking at Dell and Lenovo's current budget offerings, we feel it's high time it stepped up its game. This particular model is being sold predominantly in offline stores, where it would be very easy to miss due to its subdued looks. The all-black unit is built mostly of plastic, except for the palm rest area which is metal. Acer has tried to spruce up the look of this laptop with textured plastic for the lid and base, but it doesn’t really help the cause too much. It’s put together well, but just doesn’t look or feel the part.

The glossy 15.6-inch display has a low resolution of 1366x768, which causes visible jaggedness in text and icons. Thankfully, colour banding isn’t much of an issue but vertical viewing angles aren't great, leaving you with a narrow sweet spot. The colour gamut also isn't very wide so when you turn the brightness up, whites tend to bloom, which is very distracting. The plastic frame flexes easily too, and the hinge doesn’t seem very strong, making the lid flap about when there's any movement.

For connectivity, there are two USB 3.0 ports, one USB Type-C port, HDMI, VGA, LAN, USB 2.0, a headphones and microphone combo socket, and a DVD burner. That pretty much covers all the standards you’ll need. Placement could have been better, as the two USB 3.0 ports and HDMI port are too close to each other, which is an issue if you have an odd-sized HDMI cable or large USB drive. There’s a large exhaust vent on the left of the laptop. The intake vents are on the bottom, along with stereo speakers that fire downwards. The rubber feet don’t offer much elevation so it’s easy to block the speakers if the laptop isn't on a flat surface.

The Aspire E5-575G has a full-sized keyboard although the Num pad is a bit smaller than the rest of the keys. The alphanumeric keys are well spaced out and are quiet when typing. They feel a bit mushy but it’s not too bad overall. There is a bit of flex in the keyboard area but it's only an issue if you hammer away while typing. There’s a massive trackpad which works well with Windows 10 gestures, and its buttons that don’t require too much effort. It tends to get in the way while typing though since it’s a bit too much to the left.

Specifications and features
The SKU that we received (E5-757G-78VT) had a Core i7-6500U, which we’ve seen in lots of top-end Ultrabooks, along with 16GB of RAM (2x8), a 1TB hard drive, a 128GB M.2 SSD, and an Nvidia GTX 950M with 2GB of GDDR5 memory. There’s also an HD webcam, Wi-Fi b/g/n/ac, Bluetooth, and a 6-cell battery. The specifications are really hard to beat at this price point, and this is one of the reasons that makes this laptop a a very interesting choice.

Acer also provides a hatch on the bottom for quick upgrades. You can easily access the RAM slots, SSD and hard drive bay, which enthusiasts will appreciate. You get Windows 10 Home 64-bit along with the usual suite of apps from Acer. There’s abFiles and abPhoto for Acer’s BYOC (Build You Own Cloud) feature; Acer Care Centre; Quick Access; and Recovery Management. Other pre-installed software includes CyberLink PowerDVD 12, Foxit PDF viewer, McAfee LiveSafe, and a bunch of free Windows apps.

Performance
The first thing you’ll want to do here is get rid of any apps that you aren't going to use regularly as they just occupy precious space on the SSD. Booting and applications loading is generally quick, thanks to the SSD and large amount of RAM. The laptop also runs pretty cool for general use due to its low-voltage CPU and the fact that the Nvidia GPU isn’t in use all the time. The left palm rest area gets a bit warn when gaming, but other than that, we didn’t face any issues.

The Aspire E5-575G puts on a good show in benchmarks too. PCMark 8 returned 3611, 4026, 3251 in the Home, Creative and Work test suites. These CPU scores are comparable to those of most high-end Ultrabooks, but the E5 edges them out in the graphics department thanks to the beefier GPU. For instance, in the Cinebench R15 OpenGL test, the Acer put out 78fps, while Intel’s integrated GPU outputs around 45fps. The same is reflected in 3DMark Fire Strike too, where we got 3211 points.

The laptop handles most games well. In Battlefield 4, we got an average of 43fps with the Ultra preset while in FarCry 4, we got similar results, averaging about 40fps with the Ultra preset. The low native resolution is the primary reason for the good framerates even in heavy games. The quality of the display is a problem as well, as the bloom effect is very distracting and ruins details in games as well as movies. It is mostly noticeable when the brightness is bumped up above 70 percent.

Audio through the speakers gets fairly loud and you can tweak the settings through Realtek’s control panel. The speakers sound best when the laptop is placed on a flat surface as sound can be reflected, whereas it will get muffled with it on your lap.

The 6-cell battery lasted us through roughly 6-7 hours of continuous usage, which involved Web surfing, watching videos, and a bit of editing work on Google Docs. In PCMark’s battery test, the laptop managed around 4 hours. Overall, you can expect decent battery life as long you stick to light tasks.

Verdict
The Acer Aspire E5-575G costs Rs. 59,990 and is available in retail stores across the country. If you look at it purely from a specifications standpoint, it’s a good bargain as it’s tough to find anything else that matches it at around this price segment. However, Acer has compromised in other key areas in order to achieve this value proposition, which is plain to see in terms of build quality, design, and the display. If these things matter to you, then you might want to consider other options.

For a bit more money, you can get one of the new Dell Inspiron 15 7000 series or even Lenovo’s Ideapad 510 series; both of which feature Intel’s 7th Generation Kaby Lake processors and much better designs. Plus, Lenovo’s offerings also give you full-HD IPS panels for a few thousand rupees more, which is definitely worth it. Granted, they might not match the Acer completely in terms of specifications, but for basic multimedia work, they should be more than capable.

The Aspire E5-575G would have gotten our whole-hearted recommendation had Acer paid more attention to the design and display of the laptop. If it’s just specifications you’re after then you’d be hard pressed to find a better deal than this. However, we would give it a pass and compromise a bit on specifications in order to find a laptop with a better display and build quality.