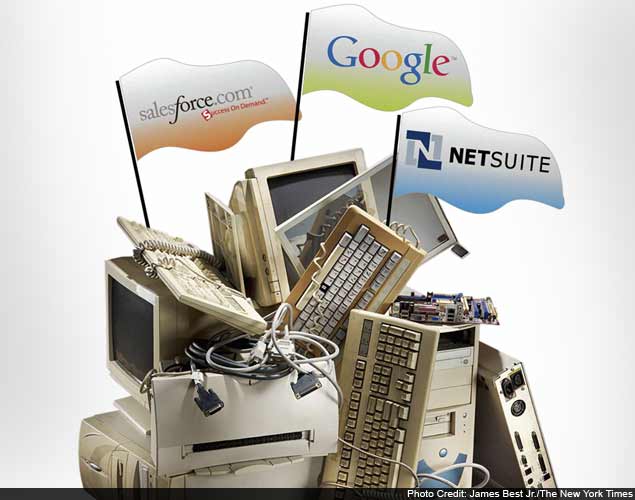 As a young executive at Microsoft, Steven A. Ballmer helped topple older, slower-moving technology giants like the Digital Equipment Corp., Wang and Novell.

These days, it is Microsoft's turn to fend off the upstarts as it struggles to compete in a computing world that is increasingly mobile and based in a "cloud" of Internet-connected computers to which many customers gain access at the same time. It's all part of the inevitable life cycle for technology companies.

"Getting disrupted is the defining characteristic of this industry," said Aaron Levie, the chief executive of Box, an online data storage company. "You can even have a near monopoly like Microsoft did, and then everything gets redefined."

Ballmer will not have to take Microsoft into the future; last Friday, he announced that he would retire within a year. But young executives like Levie are not gloating over Ballmer's exit. They know well that one day - if they are lucky to be as successful as Ballmer - they could face the same problem.

"It just feeds my already-healthy sense of paranoia," Levie said.

The rare tech company manages to thrive from one generation of technology to the next. Only a few of the big ones - IBM, Intel and Apple - have done it. And it is not yet clear if Microsoft has a clear path to joining that list of multigeneration kingpins.

Ballmer was closely identified with the personal computer revolution, and later with corporate software running on computer servers. Those innovations brought Microsoft the cash and talent to adapt to the early Internet with the Explorer browser, and diversify into online gaming.

What it could not buy, Ballmer - the younger generation in tech - says, was a clear vision of the future. Apple and Google have led development of smartphones and a long list of companies like Amazon.com have led the development of cloud computing. Microsoft, meanwhile, has often had to play catch-up.

"All technology aspires to be legacy," said Scott Dietzen, chief executive of Pure Storage, a data storage startup. "It's that or obsolescence."

"The most powerful factor," he added, "is that the very best talent is drawn to doing something disruptive to the legacy, something new and fresh. And in this business the best are so much more productive than anyone else."

During Ballmer's tenure as chief executive at Microsoft, the company had considerable growth. Ballmer led the creation of the Windows Phone operating system, which received good reviews but has struggled to gain traction in the market, and Microsoft's efforts in cloud computing. Also under his leadership, the company acquired Skype, an Internet communications service, for $8.5 billion, and paid $1.2 billion for Yammer, a social network for business.

But the breakthroughs, whether they were in Internet search, smartphones or Internet-based software, have usually happened somewhere other than Microsoft.

Levie, 28, grew up near Microsoft's headquarters in Redmond, Wash. Several of his schoolmates' parents worked for Microsoft. Few of his generation, he said, followed their parents there. Among those who did, he said, few stayed.

"I think about being 40 or 50 and being disrupted," said Levie, whose company was founded in 2005. "You can be a visionary, and have a great business model, but no tech company can avoid it. There is no quick way to transition into the next thing."

The closest to a safeguard, he said, is to be "like Amazon: race to the bottom on prices ahead of your competition, keep profit margins low and make things tough for them."

Ballmer joined Microsoft in 1980, and its breakthrough software, Windows 3.0, was released in 1990. Its stock peaked in December 1999, shortly before Ballmer replaced Bill Gates, Microsoft's co-founder and his close friend, as chief executive. Since then, Microsoft's shares have fallen about 33 percent.

Microsoft is 38 years old, three years away from the age at which Digital Equipment and Wang disappeared. Novell, which was founded in 1979, was acquired in 2011 by the Attachmate Corp., an investment group.

"He took a company with $20 billion in revenue and turned it into a $78 billion company," Levie said. "But you can never count on more than a decade on top."

That feeling that real success lasts a decade or so haunts even the most successful of the new breed of tech executives.

Aneel Bhusri, the co-chief executive of Workday, a cloud-based business management software company with a market capitalization of $13 billion, recalled sharing a beer a few years back with Marc Benioff, the founder and chief of Salesforce, a $25 billion company offering sales and marketing software via the cloud.

"It was early days, but we were confident about cloud computing," Bhusri said. "Marc said we had about a dozen years, then something else would come along."

Bhusri didn't suggest what that something else could be. That is the problem: When you're caught up in running your business, it's difficult to foresee the shifts that could upend it, Bhusri said.

In an email, Benioff recollected the conversation, and added this thought: "Technology is a continuum - it is constantly getting lower-cost and easier to use. The role of the CEO is to ride that continuum." The trick is to always respond to the better and cheaper thing that is coming along.

Some say that although Ballmer did try to alter Microsoft's course and move beyond the personal computer, he failed to fully understand how broad and deep the changes to cloud and mobile would be.

"Microsoft had phones, Microsoft had tablets, but they tried to put Windows in them," said Zach Nelson, chief executive of NetSuite, a maker of Web-based business software. "They couldn't leave the PC world behind, even though they saw the change coming.

Some Microsoft executives did see the change. Ray Ozzie, Gates' successor as chief software architect at Microsoft from 2005 to 2010, said in his farewell memo to Microsoft employees that they had to imagine a post-PC world. What, he wrote, would such a world look like?

"How would customers accomplish the kind of things they do today?" he wrote. "In our industry, if you can imagine something, you can build it."

Ozzie, who was reportedly frustrated by the slow pace at which his innovations were turning into products at Microsoft, also urged the rank and file to act swiftly. In late 2012, Ozzie raised $4 million for Taiko, a startup that is said to be developing cloud-based mobile applications for social interaction.

Among Ballmer's generation of tech executives, his post-2000 stock performance is hardly the worst. Shares of Cisco Systems, the biggest maker of computer networking equipment, have dropped 54 percent. Shares of Oracle, one of the biggest business software companies in the world, have fallen 30 percent.

Dell, which is now trying to go private as part of a turnaround, is off about 70 percent. Sun Microsystems, once one of the most influential tech companies, was purchased by Oracle in 2010 for $5.6 billion, 88 percent below its value in 2000.

Those kinds of numbers seem to convince the new generation that they are, indeed, beating the old incumbents. But the lingering question is, what next?

"You can imagine a world without Windows, but not without the network, so the cloud feels like it can't go away," said Nelson of NetSuite. "We're in the middle of where the world is going."

"I can't say it's the last computing architecture," he said. "It's my last. The PC was Ballmer's last."

Microsoft CEO to retire: 9 candidates who could replace Steve Ballmer
AWS outage brings down Instagram, Vine and other services