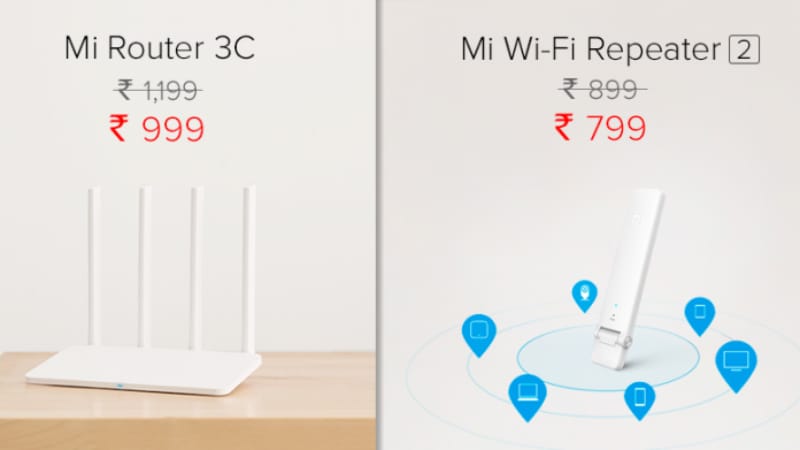 As we mentioned, the Mi Router 3C is getting a permanent price cut in the Indian market. A moderator's post on the MIUI forum confirmed the update. The router, launched at a price of Rs. 1,199, will now be sold at a new price of Rs. 999. On the other hand, the Mi Wi-Fi Repeater 2 has received a permanent price cut of Rs. 100 and is now available for Rs. 799 down from the previous Rs. 899.

Notably, the Mi Router 3C had been selling at the revised price of Rs. 999 in previous sales online. The new prices will now be applicable across Mi.com, Flipkart, Amazon, and Mi Home retail stores.

The Mi Router 3C was launched in India in May 2017. It is Xiaomi's affordable offering in the high-performance segment. The router features four copper antennae, each of which has a dedicated PCB circuit. It supports the Wi-Fi 802.11 protocol and has a single 2.4GHz band. Connectivity options include 1 WAN port and 2 LAN ports. Users can also track real-time usage through the Mi Wi-Fi app.

The Mi Wi-Fi Repeater 2 was launched in India in June 2017. This device lets you extend the coverage of your Wi-Fi network, and offers connectivity for up to 16 devices. It is compatible with most major router models (including Mi Router 3C) and comes with two inbuilt PCB antennas claiming to boost signal and download speeds.