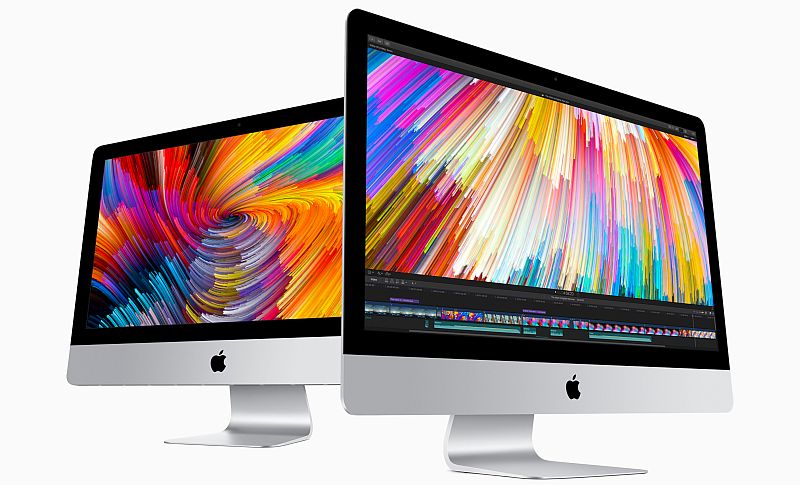 Apple at its WWDC 2017 keynote, as expected, announced an update to its iMac, MacBook, MacBook Pro, and MacBook Air lineup of devices. The company also teased its all-new iMac Pro - the most powerful Mac ever - which will be available starting December this year.

The Cupertino-based giant announced that the new iMac will sport the "best Mac display ever" which is 43 percent brighter at 500 nits and with support for one billion colours. Ternus also confirmed that the entire lineup will ship with Intel's seventh-generation Kaby Lake processors.

The updated iMac features Kaby Lake processors up to 4.2GHz with Turbo Boost up to 4.5GHz and supports up to twice the memory as the previous generation. Fusion Drives are now standard on all 27-inch configurations and the top-end 21.5-inch iMac. Ternus added that the SSD storage options are now up to 50 percent faster, and iMac comes with Thunderbolt 3.

The new iMac lineup will have two USB Type-C connectors with Thunderbolt. Apple also confirmed that the entry level iMac models will have the Intel Iris Plus Graphics which is up to 80 percent faster graphics than the previous generation.

The new 21.5-inch iMac Retina 4K will come with AMD Radeon Pro 555 and Radeon Pro 560 graphics. Ternus claimed that the new system is up to 3 times faster than the previous generation in terms of graphics, while the 27-inch will be 50 percent faster.

The company also announced an update to its 27-inch iMac models which Apple said is the "most popular desktop for pro customers."

The company also offered a sneak peek at the iMac Pro which is marketed as new "workstation-class product line designed for pro users with the most demanding workflows." Apple is calling it the most power Mac ever. The all-new iMac Pro sports 27-inch Retina 5K display with up to 18-core Xeon processors and up to 22 Teraflops of graphics computation. The all-new iMac Pro will come in new Space Grey enclosure.

The iMac Pro is scheduled to ship in December starting at $4,999 in the US. The company also detailed a new thermal architecture that is said to give it 80 percent more cooling capacity in the regular iMac design. It ships with the new AMD Radeon Pro Vega GPU with 16GB of HBM2 memory. It supports up to 4TB SSD, 128GB ECC RAM, four Thunderbolt 3 ports, and 10Gb Ethernet - a first for Mac.

Giving a sneak peek of the new iMac Pro, Ternus said, "We're thrilled to give developers and customers a sneak peek at iMac Pro. This will be our fastest and most powerful Mac ever, which brings workstation-class computing to iMac for the first time. We reengineered the whole system and designed an entirely new thermal architecture to pack extraordinary performance into the elegant, quiet iMac enclosure our customers love iMac Pro is a huge step forward and there's never been anything like it."