Microsoft says the next-generation of Windows will unlock greater economic opportunity for developers and creators. 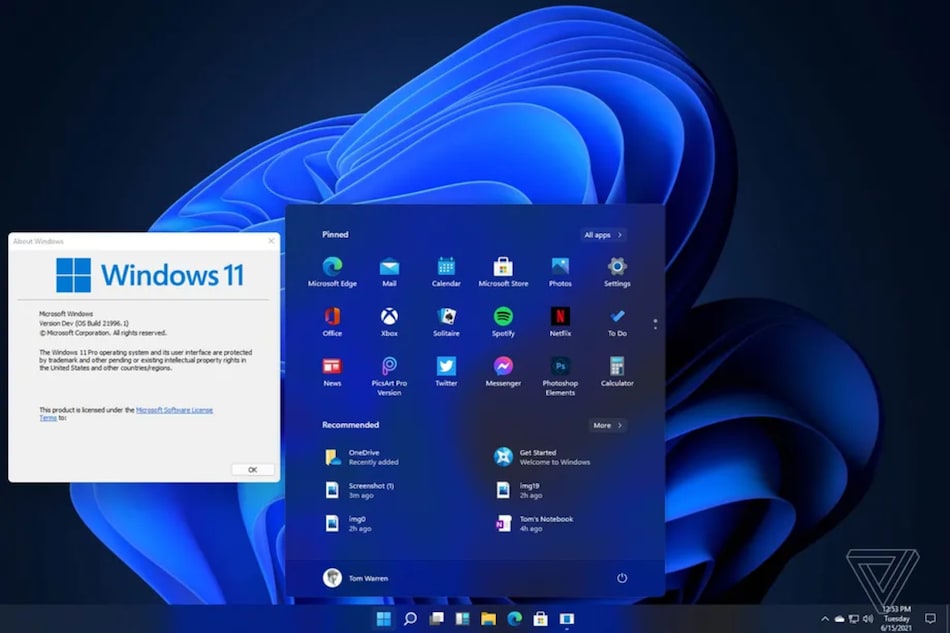 Microsoft has confirmed that the “next-generation” of Windows will launch on June 24 via a virtual event. But ahead of the launch, a massive leak has revealed the interface of the upcoming OS that includes a redesigned Start menu and a lot more. Reports suggest that Microsoft will be releasing the next update as Windows 11, leaving the Windows 10 nomenclature behind. The Windows 11 update is expected to be a significant one and is likely to bring an overhaul of the Windows app store as well. The new leak suggests that Windows 11 could also have a new widget icon in the taskbar.

The Verge's Tom Warren has leaked screenshots of the design elements of Windows 11. A lot of design inspiration is taken from the Windows 10X that was originally built for dual screens but was scrapped later. The app icons appear in the centre of the taskbar, the tray area has been cleaned up, and a new Start button and menu have been incorporated. You can place the app icons and the Start menu in the centre of the taskbar or move them to the left side. There are no Live Tiles in the Start Menu. It has a simplified design with pinned apps, recent files, and shut down and restart options.

Screenshots show that Windows 11 may also come with a system-wide dark mode. The user interface is cleaner. It includes redesigned app icon and rounded corners overall. The new Windows app store is not reflecting yet but should be included in the final version.

Microsoft CEO Satya Nadella at the Build 2021 conference said that the next update will be ‘one of the most significant updates to Windows of the past decade' and it will ‘unlock greater economic opportunity for developers and creators.'

Windows 11 will also likely have a widget icon with quick access to news, weather, and other web content. There are new snap controls that you can access from the maximize button on all apps. It is essentially a redesigned version of the cascade windows function that has existed in the operating system for years. You can quickly snap windows side by side, or arrange them in sections on your desktop. Microsoft is reportedly also improving the Xbox experience in Windows 11 with quick access to Xbox Game Pass games, the social parts of the Xbox network, and the Xbox store.

YouTuber Michael MJD has also done an overview of the upcoming Windows 11 and shown elaborately as to what it looks like in his new video. You can watch the video below:

The launch event for the new Windows is scheduled for June 24 at 11am Eastern Time (8.30pm IST).