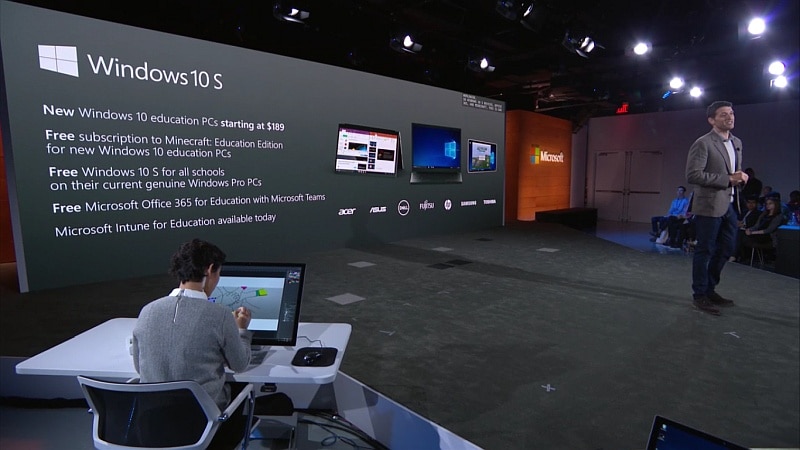 Microsoft's Tuesday New York event was centred on education, and the company took centre stage to introduce Windows 10 S as a simpler, more secure operating system meant for students. The Windows 10 S software is tied to the Windows Store, which means students can only run apps downloaded from the Store. All legal Windows 10 Pro machines in schools are eligible to get Windows 10 S for free.

What is Microsoft Windows 10 S?

Windows 10 S is a new Windows experience that is built from the ground up keeping in mind classrooms. As we mentioned, Windows 10 S only runs apps downloaded from the Windows Store, and for Microsoft, this means that everything is verified for both performance and safety. Students won't be exposed to potentially dangerous apps, while every app is certified by Microsoft to ensure there is no performance drop over time.

An example of this, was the faster first-time login compared to Windows 10 Pro - just about 15 seconds - while subsequent logins will take less than 5 seconds. All Web browsers in the Windows Store will run on Windows 10 S devices, but Microsoft obviously recommends Edge that now has education-focused features like tab ordering and annotations.

Microsoft also announced that the Office 365 suite of apps including Teams will be coming to Windows Store, complete with an education-focused update that is meant for collaboration.

Windows 10 S brings all the features that were brought by the Creators Update to Edge and Cortana. Students and teachers can also upgrade to Windows 10 Pro - for a $49 (roughly Rs. 3,150) fee - to download an application that isn't in the Windows Store, but then, they will not be able to come back to Windows 10 S thereafter.

Just like the Chrome OS can be managed through cloud-based device management, Windows 10 S machines will support Intune, Microsoft's cloud-based device management system. Microsoft Intune for Education is available today for administrators worldwide. Other administrator features include the ability to use a USB key to set up a PC in seconds with the Setup My PC wizard.

Microsoft has partnered with Acer, Asus, Dell, Fujitsu, HP, Samsung, and Toshiba to offer Windows 10 S laptops starting at as low as $189 (roughly Rs. 12,100). These will become available in the summer, before the next school term.

Terry Myerson, VP at Microsoft, also confirmed that these partners will also offer premium devices in the future. All of the Windows 10 Educations PCs will come with Minecraft: Education Edition (a free one-year subscription).

Windows 10 S is a hassle-free OS made for the schools and is set to take on Chrome OS. With Chromebooks took the education market by storm, especially after Android apps were introduced last year, and we expect Windows 10 S to give it some good competition in the future. A lot still depends on the new devices that will be launched by the mentioned partners in summer.

At the event, Microsoft also announced Classroom Experiences for Teams, making it a "digital hub" for students and teachers. It is available in private preview today, and will become available worldwide this summer. A batch of education-focused updates will be released for Office 365 this fall as well. Built in 'View Mixed Reality' features for Windows 10 will also be released this fall for free, meant to help view 3D objects in the real world.