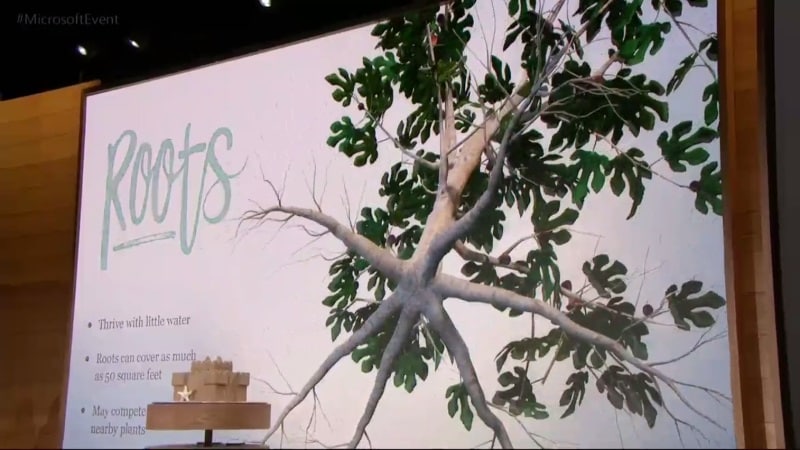 Microsoft formally introduced the new, revamped Paint 3D app, which was recently leaked. It includes new tools for importing and handling 3D artwork, as well as integration with a new online community called Remix3D where users can share and search for assets to use in their own creations. The community is integrated with the massive 3D Warehouse, the repository for Trimble's popular SketchUp software, and already contains millions of 3D objects.

Users can import objects using a Windows 10 Mobile app which was demonstrated running on a Windows 10 smartphone but will soon come to other platforms. Anything created in Minecraft can also be pulled in. Paint 3D has simple tools for manipulation, sharing, and even 3D printing. 2D imagery can be stamped onto 3D objects like textures, and simple doodles instantly turn into fully independent 3D objects.

The 3D community is also integrated into PowerPoint, allowing users to create slides and progressions with the exact required perspective or perspectives of an object. Users can create Pinterest-style boards in order to collect and sort objects for their own use later.

A new HoloLens integration with interior design app Houzz was also demonstrated. Users will be able to choose items such as furniture and place them within a room, in amongst existing objects, to see how they will fit and look at their exact size and scale.

Furthermore, hardware partners including HP, Acer, Asus, Lenovo and Dell will be launching their own VR headsets starting at $299, which will be fully supported with the Windows 10 Creators Update.

For gamers, the update will bring a one-click streaming feature using the Beam service, as well as an easy way to set up multi-player tournaments and communicate with friends and competitors while playing across PC and Xbox hardware. Microsoft is well aware of the popularity of game streaming, and wants to tie that in with its offerings.

Finally, new sharing tools were demonstrated. In Windows 10 Creators Update, up to five contacts' thumbnail photos can be pinned to the right of the taskbar. These will let a user quickly jump in and out of chats, drag and drop files, and even just sent little "shoulder tap" nudges that pop up on screen. Skype, email and SMS are supported, with APIs for third party apps promised as well. Sharing sheets within Windows apps will feature the same contacts prominently as well.

Early builds of Windows 10 Creators Update will be available to fans and developers immediately through the Windows Insider program. The update will roll out free to all Windows 10 users in spring 2017. Details of other new features will be announced in the time leading up to then.