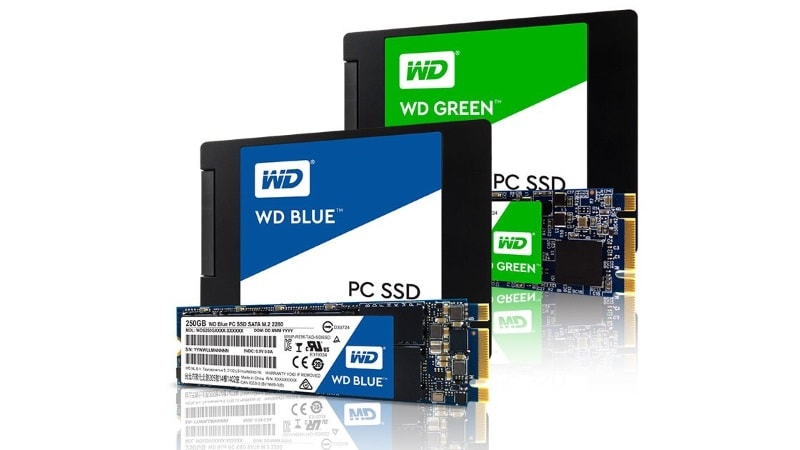 WD has launched new consumer SSDs under its popular WD Green and WD Blue lines, as well as dramatically redesigned external hard drives. The announcements mark a change in direction for the company, acknowledging a shift in the purpose of traditional spinning hard drives and a preference among users for SSDs as their primary internal storage medium.

The new SSDs are aimed at PC users who have been moving away from hard drives when building and upgrading their PCs and laptops. In line with the existing hard drive product segmentation, the WD Green models are entry-level and tuned for lower power consumption, while the WD Blue products are suitable for more demanding users.

Both new SSD lines will be available as either standard 2.5-inch SATA drives or the newer M.2 format cards. However, the M.2 models also use SATA, not PCIe for connectivity, which confines speeds to the mainstream SSD class. Specifications are identical across form factors.

WD Green SSDs have launched in 120GB and 240GB capacities, with promised sequential read and write speeds of up to 540MBps and 405MBps respectively. Endurance is rated at 40TBW and 80TBW (terabytes written) over the life of each drive. WD Blue drives have launched in capacities of 250GB, 500GB and 1TB, and offer up to 545MBps and 525MBps sequential read and write speeds respectively, with endurance ranging from 100TBW to 400TBW depending on the capacity.

WD Blue drives have already launched, with prices starting from $79 (approximately Rs. 5,275 before taxes and duties) for the 250GB model and going up to $299 (approximately Rs. 19,965) for the 1TB model. WD Green drives do not have prices yet and will be available later this year, but only in select regions and to OEMs. All models come with a three-year limited warranty. WD also offers a new software suite called SSD Dashboard which will show diagnostics and offer health reports.

Earlier this year, WD acquired SanDisk, one of the world's leading solid-state storage product companies. The new WD SSDs are directly derived from SanDisk's portfolio and use its 15nm planar TLC NAND. While not WD's first SSDs, the new models will mark a huge shift in positioning for the company which has been associated with hard drives throughout its life.

The new lineup of external hard drives includes desktop 3.5-inch models as well as portable 2.5-inch models preformatted for either PC or Mac users. The designs were created in collaboration with fuseproject, an external design and branding firm founded by the legendary Yves Behar. According to WD, the new design language recognises an intersection between users' physical and digital lives.

My Passport drives for Windows now come in six colours, whereas macOS models come in only black. They all have textured lower halves. Capacities go up to 4TB. Hardware encryption is supported, and WD bundles automatic backup software. A USB 3.0 cable in the same colour is included in each box, and buyers get a two-year warranty. Prices start at $79.99 (approximately Rs. 5,342) for 1TB and go up to $139.99 (approximately Rs. 9,350) for 4TB.

My Book drives are now available in capacities ranging from 3TB to 8TB and work with either Windows 7 and above or macOS Mavericks and above using the exFAT file system by defualt. The drives are compatible with Apple's Time Machine backup protocol and also include WD's encryption and backup software. My Book drives require external power, and there is no mention of USB Type-C in the launch announcements. Prices start at $129.99 (approximately Rs. 8,682) for 3TB and go up to $249.99 (approximately Rs. 16,697) for 8TB.