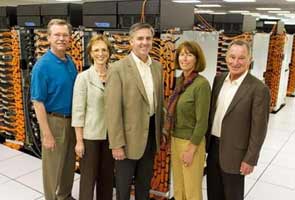 An IBM supercomputer developed for US government nuclear simulations and to study climate change and the human genome has been recognised as the world's fastest.

The machine delivered an impressive 16.32 petaflops -- a petaflop equating to a thousand trillion operations -- per second.

Sequoia is primarily for simulations used to ensure the safety and reliability of US nuclear weapons. It also is used for research into astronomy, energy, human genome science and climate change.

Sequoia dethrones Fujitsu's 'K Computer' installed at the RIKEN Advanced Institute for Computational Science (AICS) in Kobe, Japan, which dropped to the number two spot at 10.51 petaflops per second.

A new Mira supercomputer which is also part of the IBM BlueGene/Q series at Argonne National Laboratory in Illinois, was third fastest.

The most powerful system in Europe and number four on the List is SuperMUC, an IBM iDataplex system installed at Leibniz Rechenzentrum in Germany.

China, which briefly took the top spot in November 2010, has two systems in the top 10.