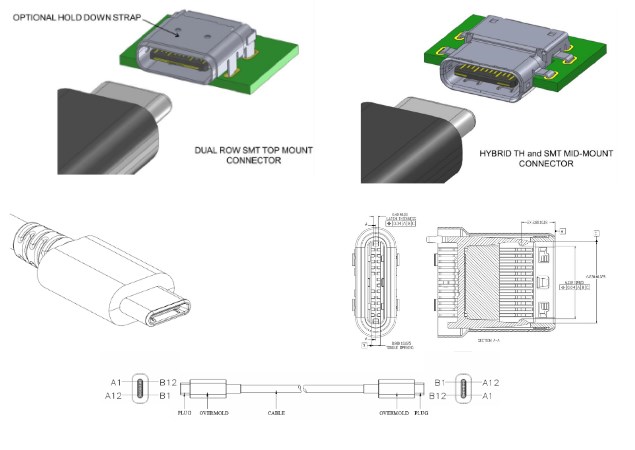 The USB 3.0 Promoter Group has announced that it has completed work on designing the much-anticipated USB Type-C connector. USB Type-C will replace the existing Type-A and Type-B used across millions of computers, peripherals and portable devices today. The single connector type will be reversible, making life easier for users who will not have to check which way to insert a USB plug into a port. The same connector will also be used at both ends of a USB cable.

The USB Type-C plug will be approximately the same size and shape as the current Micro-USB Type-B plug which is used by the majority of smartphones, tablets and peripherals available today for charging and data transfer.

While nothing about the USB protocol itself changes, the plugs are physically incompatible with existing USB ports. Passive adapters will be required to make devices with Type-C ports interoperable with current day PCs, cables and chargers. Cables with a Type-C connector on one end and a legacy connector on the other end will also necessarily be available.

It might still take several months for devices with USB Type-C ports to become available. Current USB 2.0 and 3.0 protocols will be fully supported, and no further revision will be necessary when USB 3.1 and subsequent versions are launched. More specific launch dates are not known, but the USB 3.0 Promoter Group consists of HP, Intel, Microsoft, Renesas, STMicroelectronics and Texas Instruments, which will encourage widespread support and adoption. The standard is not likely become mainstream for many years, thanks to the popularity of the existing standards.

In addition to supporting USB 3.1 speeds of up to 10Gbps (twice the speed of today's USB 3.0), the Type-C connector will allow for increased power delivery of up to 100W, which would be enough to charge a laptop or power an external 3.5-inch desktop hard drive as well as better resistance to electro-magnetic and radio frequency interference.

The connector consists of two rows of 12 pins each, such that either row will make contact with corresponding pins in the USB port depending on which way it is inserted. Devices will detect the relationship required and negotiate the transfer of power over USB when a cable is plugged in. A two-way mode is supported in addition to the traditional USB host-to-device roles.

The combination of all the new standards and capabilities will allow for new devices and scenarios such as monitors with built-in docks that can not only charge a connected laptop but also connect and provide power to multiple peripherals.