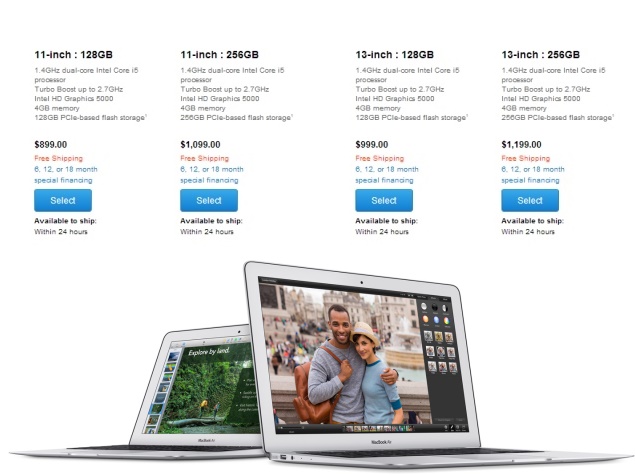 Contradicting earlier reports that Apple has used slower SSDs in its 2014 MacBook Air refresh, news website MacRumors has published information indicating that the variance detected in initial benchmark was due to Apple's practice of sourcing SSDs from multiple vendors, rather than sourcing different SSDs entirely.

Apple has shipped MacBook Airs with SSDs made by either Samsung, Sandisk or Toshiba, without any difference indicated to consumers. Early benchmark results reported by multiple sources had indicated that there was a significant speed difference between the 2013 and 2014 MacBook Air models, but MacRumors attributes this to the fact that different drives from different vendors were tested.

It is possible that Apple requires a minimum level of performance from each vendor but accepts models which exceed that level, leading to discrepancies through the product line. Newer benchmarks conducted by Other World Computing, which has identified the specific SSD models used in its 2013 and 2014 MacBook Air units, indicate near-identical performance between the two using Blackmagic Disk Speed Test. OWC is run by MacSales.com, a vendor of third-party upgrades including the PCI-express SSDs used in Apple's newest computers.

OWC's findings contradict those of MacWorld, which had found that ordinary file compression, decompression and copy operations took up to three times as long on the newer models. MacWorld had compared a variety of models with 128GB and 256GB drives, both 11-inch and 13-inch, using real-world operations as well as the same benchmark utility. Even accounting for the speed improvements inherent to larger SSDs, significant variance was detected. However, MacWorld's test units were not all uniform in terms of SSD vendor.